According to a veterinarian from the University of California, Davis, an “underwater zombie apocalypse” is responsible for wiping out more than 20 species of sea stars between Mexico and Alaska since 2013. Since 2014, researchers had been trying to identify what was behind the massive die-off of sea stars in North America and what they’ve learned about it now is pretty fascinating…and creepy.

The underwater zombie apocalypse reference was coined by Joe Gaydos of UC Davis because of the process of decay a virus causes in sea stars and starfish. When they contract the disease, they develop white lesions and fissures that melt away over time. The limbs of the starfish will then fall off, leaving it to dissolve into rotten flesh.

Most recently, scientists discovered that it’s hitting the sunflower star (Pycnopodia helianthoides) harder than sea stars, which is turning out to have a heavy impact on the rest of the marine environment. A healthy sunflower star population feeds on sea urchins, which feed on kelp forests. With the sunflower stars dying off in droves now, the sea urchins are decimating kelp forests virtually unchecked. All this to the tune of an estimated loss of more than 90 percent of California’s kelp forests, and with that is more death and displacement to other species dependent on healthy kelp forests. Everything from red abalone to fish that hide in kelp from their predators are in some way affected by the entire event.

The National Oceanic and Atmospheric Administration (NOAA) dragged over 3,000 kilometers of ocean floor along the coastline between Alaska and Mexico and found that anywhere from 60 percent to a full 100 percent of sunflower stars have been lost in some areas since this all started in 2013.

“Many of these outbreaks are heat sensitive. In the lab, sea stars got sick sooner and died faster in warmer water,” Drew Harvell, a Cornell University marine ecologist, told Science Magazine. “A warming ocean could increase the impact of infectious diseases like this one.” 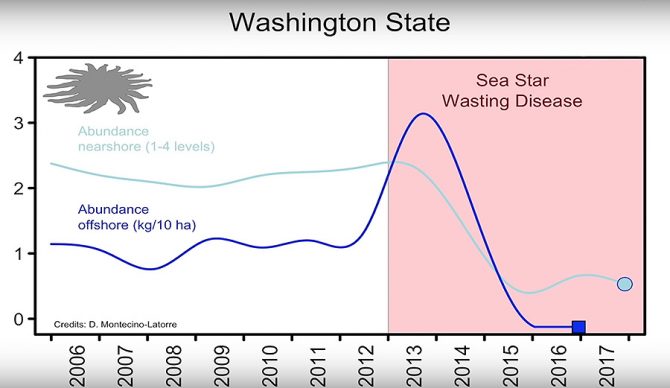