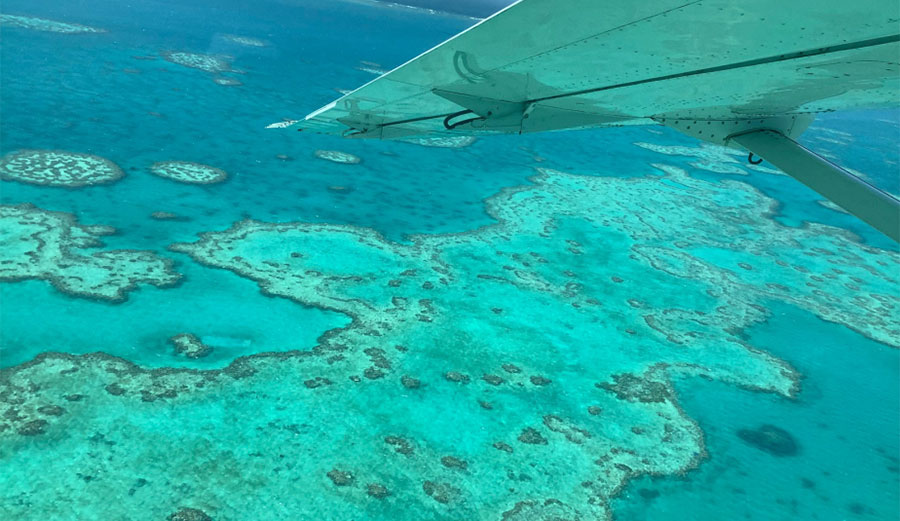 Things are not looking good for the Great Barrier Reef. Photo: ARC Centre of Excellence for Coral Reef Studies

You’ve known for quite some time now, I suspect, that the Great Barrier Reef is in dire straits. Most of the world’s reefs, in fact, are in the same straits, all struggling to survive as the ocean warms and becomes more acidic. But man-oh-man, the most recent report from scientists at James Cook University, entitled “Climate change triggers Great Barrier Reef bleaching“, is bad.

In the last 20 years, the GBR has gone through five bleaching events. The first one on record happened in 1998. Then, a few years after we escaped Y2K unscathed, a second occurred in 2002. Then a third in 2016 and again in 2017. Up until then, the northern and central portions of the reef were most affected, but with the new research, it’s clear that the entire reef is in bad shape.

“We surveyed 1,036 reefs from the air during the last two weeks in March, to measure the extent and severity of coral bleaching throughout the Barrier Reef region,” Professor Terry Hughes, Director of the ARC Centre of Excellence for Coral Reef Studies at James Cook University, said in a statement. “For the first time, severe bleaching has struck all three regions of the Great Barrier Reef – the northern, central, and now large parts of the southern sectors.”

Coral bleaching is a natural occurrence that does happen relatively frequently. The problem with it arises when they happen year-after-year or if the bleaching event lasts for longer than normal. This year, February had the highest monthly temperatures ever recorded on the Great Barrier Reef since the Bureau of Meteorology’s sea surface temperature records began in 1900. According to IFLScience, half of all the shallow water corals in the northern region of the Great Barrier Reef died because of the 2016 event. The damage from the most recent bleaching event won’t be known for quite some time.

“Bleaching isn’t necessarily fatal, and it affects some species more than others. A pale or lightly bleached coral typically regains its color within a few weeks or months and survives,” said Professor Morgan Pratchett. “We will go back underwater later this year to assess the losses of corals from this most recent event.”

“Of the five events we have seen so far, only 1998 and 2016 occurred during El Niño conditions,” Professor Hughes said. “As summers grow hotter and hotter, we no longer need an El Niño event to trigger mass bleaching at the scale of the Great Barrier Reef.” “We have already seen the first example of back-to-back bleaching — in the consecutive summers of 2016 and 2017.”