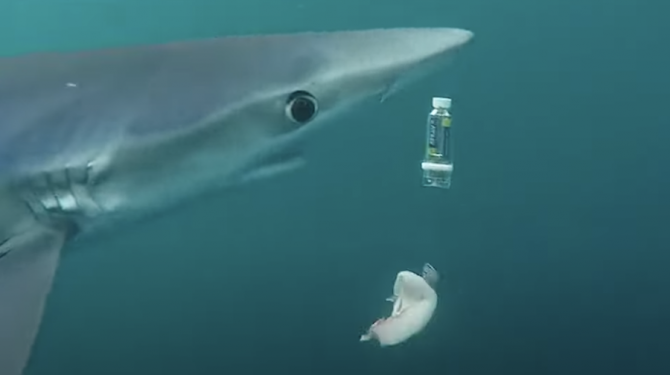 In ocean fisheries, accidental take (or bycatch) poses a lethal threat to sharks and rays. Long lines trailing hooks – sometimes numbered in the thousands – can float in the open ocean, and when non-targeted species swim past, they’re vulnerable to them, too.

One research team’s new device could keep sharks and rays safe from bycatch by leveraging their sensitivity to electrical fields. SharkGuard is a small, cylindrical device that attaches to fishing lines just above the hook and emits a pulsing, short-range electrical field.

The gambit is that sharks and rays can detect tiny electric fields thanks to bulbous organs concentrated near their heads called Ampullae of Lorenzini. So when they encounter the transmitter, SharkGuard’s developers said in the journal Current Biology, it likely “overstimulates” their systems and, ideally, deters them from hitting the hook.

But whether SharkGuard’s small pulses would repel or attract the animals was an unknown at first. Sharks and pelagic rays use their heightened electrical perception when hunting to detect the small electrical fields prey give off.

So the device’s developers had to perform field tests. Marine biologist Rob Enever of Fishtek Marine, a conservation engineering company in England, sent out two fishing vessels in the summer of 2021, ScienceNews reported. The researchers kitted out both boats with some normal hooks and some with SharkGuard, and the crews started fishing for tuna.

The tests on the SharkGuard device were relatively successful.

By the numbers, that’s an average reduction from 6.1 blue sharks caught per 1,000 hooks to just .5 sharks — and seven rays down to two. For scale: the two boats deployed almost 19,000 total hooks between them during testing.

In total, each boat would have caught about 60 sharks and 70 rays with standard hooks, but would only catch five sharks and 20 rays with SharkGuard.

Apply the numbers to the millions of commercial fishing vessels operating worldwide and “you’re going to have massive recovery of these pelagic shark populations,” Enever said.

Video from testing shows the device’s effect on blue sharks. While the long-term effects of the electrical pulses on the sharks can’t be known yet, it’s a fact that trailing lines will certainly harm them.

ScienceNews reported unseasonably low tuna catch “across the board” in the study. That made it impossible for researchers to tell whether SharkGuard also bothers tuna. If it does, the disincentive for fishing operations is obvious.

Other issues exist, too. The device’s developers are reportedly working to make it cheaper and easier to charge the invention’s batteries. Further testing involving more shark and ray species should also take place and while SharkGuard’s effects looks promising, broader efforts to conserve the two ocean predator species remains critical.

“We’re at a situation now where many of our pelagic species are either critically endangered, endangered or vulnerable,” Enever said.

But, he added, SharkGuard constitutes reason for optimism. “[T]here’s people out there … trying to resolve these things. There’s hope for the future.”