Learn how to minimize chances of an adverse shark encounter as well as critical information about shark behavior, shark personalities, shark language, what to do in the unlikely event of a shark bite, and more in 20-plus video lessons in Ocean Ramsey’s Guide to Sharks and Safety. Early access pricing expires soon, so enroll now.

It’s really important to have a good mental state when you go in the water with sharks, because they’re apex predators. And while I can’t prove that they can read your mind, they can certainly read your body. A lot of people aren’t too aware that they actually give away a lot of information in their body language. From studying psychology and animal behavior, you start to become sensitive to body language.

Humans are very complex animals. They can say one thing with their words, but their body language could say another thing. I like to use these funny analogies like talking to your spouse, and they have their arms crossed. They might say, “It’s fine.” But you know that it’s not fine because their body language is not saying it’s fine.

Sharks don’t communicate vocally as far as we know, but they certainly do through body language. When you’re in the water, realize that because sharks survive off body language, they will be very sensitive to your body language.

As a human, realize that when you’re uncomfortable, your body will sometimes reflect that even if you’re not vocally saying that. If you’re nervous about something, you might be a little bit more tense, your muscles are going to be more contracted and you might be a bit twitchier than if you were relaxed and you were fluid. So, when you go in the water with sharks, you want to be relaxed and fluid.

You don’t want to be nervous and tense because that actually seems to attract their attention more. But you also don’t want to be so relaxed that you’re cocky, overconfident, or you’re underestimating them or disrespecting them. 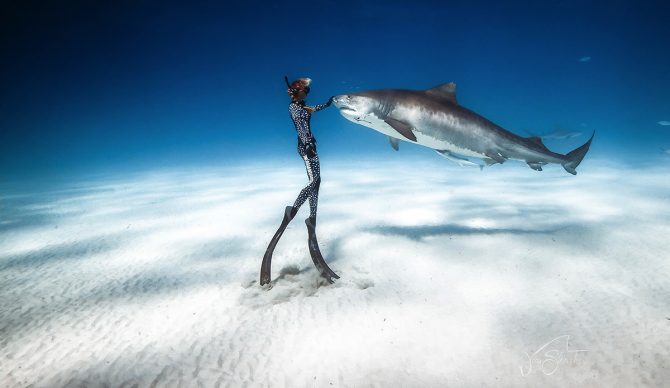 Try to move with the fluidity of a healthy marine animal, not a nervous twitch, because I’ve actually watched people who are literally diving right next to me, and they’re nervous and they’re excited. They’re a little twitchy, and all the sharks are going over to them. I’m just cruising there like a big healthy apex predator, and they’re not minding me at all. This is with someone that looks very similar to me in body size, shape and the exact same fins and same wetsuit. It’s actually part of an experiment that we did to try and see, is it a visual thing? Is it a size orientation? Why do some people get more attention from sharks than others?

I think a lot of it comes down to a certain comfort level. If you’re not comfortable, but for some reason you’re in the water with sharks because you’re diving in the ocean, take a big breath and relax. Go in with the confidence that you’re walking down the street next to all these dangerous apex predators called humans, but instead, they’re sharks, which are actually a lot safer than dangerous apex humans. Keep that fluidity as you look around at your surroundings. Embrace the mental state that you are an apex predator, right? You’re not a little victim, a potential prey item.

And I have played around with this a little bit too. As a shark makes any kind of maneuver or move towards me, I will either ball up, get small, slightly turn my back, but of course always be looking back to it, or as it swims towards me, I’ll start to swim away as if I’m scared.

And so, you can see the shark is like, “That’s right. I’m a more dominant individual.”

In that respect, I’ve observed how behavior, body language, and even mental mindset factor into these interactions.