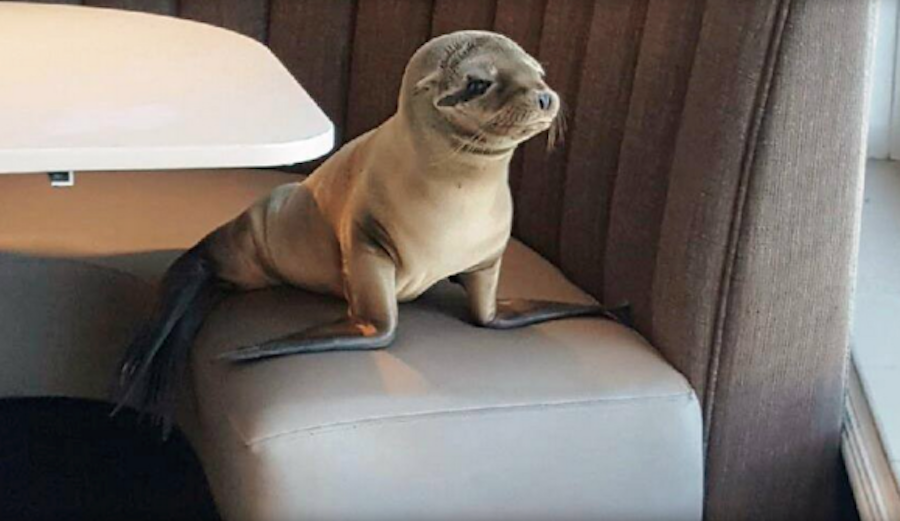 Employees found the sickly sea lion, who was less than half her appropriate weight, napping in a booth before they called in experts from SeaWorld. Photo: BERNARD GUILLAS/FACEBOOK

She wanted it fur here. But she was forced to take it to go.

Employees at La Jolla’s Marine Room restaurant were surprised to find a guest without a reservation sitting at a booth early Thursday morning. A sickly female sea lion had snuck in, likely through a backdoor, around 8 am. Instead of serving the seal, the employees contacted the nearby SeaWorld rescue team who took in the malnourished mammal.

“Maybe [she] thought we were open for high-tide breakfast, but we weren’t,” Matt Caponi, the restaurant manager, told the Los Angeles Times. “We told [her] to come back for the weekend.”

SeaWorld officials said the pup was emaciated and dehydrated. At eight months old she qualified as a “micro pup,” meaning she was about half the normal size and weight for her age. However, the marine life specialists said they were “cautiously optimistic” about nursing the sea lion back to health and eventually returning her to the wild.

Unlike surfers, seals and sea lions are among the ocean-dwelling species experiencing a negative impact from this year’s El Niño. The warm, nutrient-depleted currents coming from the equator coupled with global warming-related rising water temperatures are making food scarce. In addition to famine, the abnormal warmth is also producing algal blooms containing harmful toxins like domoic acid, which is responsible for seizures, confusion, lethargy, and sometimes death in sea lions.

It’s been a rough winter for the collective sea lion community, but things are looking good for this particular pup. And before you start blubbering your eyes out for the web-toed water doggies, check out this happy sea lion who made friends with a kayaker: