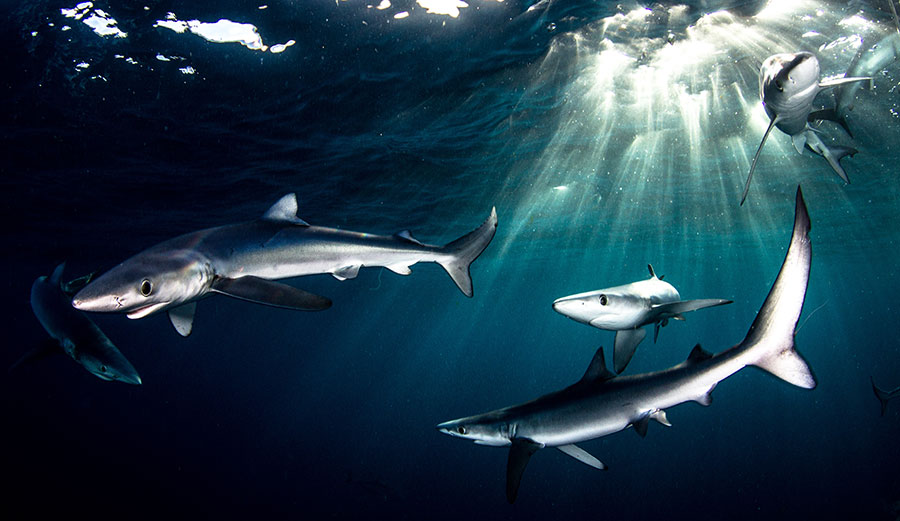 Blue sharks, which are prized for their fins, swimming off Cape Point in South Africa. Photo: Morne Hardenberg

When great white sharks disappeared from two well-known congregation areas on South Africa’s coast recently, the possible reasons were hotly debated. The appearance of a pair of shark-eating killer whales in the area was one. Another was the decline in numbers of smaller shark species that great whites prey on. Coupled with this was the growing conflict between fishers and tourism operators over the use of sharks – whether to eat them or not. The debate led to an opportunity to assess shark conservation and management in South Africa. It also provided a chance to spotlight vulnerable shark species.

Public concern prompted the Minister of Forestry, Fisheries and the Environment, Barbara Creecy, to appoint an expert panel in May 2020 to formally review South Africa’s National Plan of Action for the Conservation and Management of Sharks. The minister asked the panel, which my colleague and co-author were both a part of, to investigate the concerns and evaluate the plan.

The government uses the plan, which was first adopted in 2013, to guide the conservation, management and sustainable use of sharks to benefit all South Africans.

The expert panel review determined that the South African plan of action was in line with international standards set out by the Food and Agricultural Organisation and was of a high global standard. But it was overly ambitious and needed clarity on actions, priorities and measurable indicators.

South Africa is one of the top five global hot spots for cartilaginous fishes – sharks, rays, skates and chimaeras – with 191 species. Almost 30% of the country’s sharks and rays are threatened with extinction, primarily because of overfishing and habitat degradation. Other emerging threats are changes in ocean temperatures and ocean acidification, both due to climate change.

Sharks and rays are essential for maintaining diverse and healthy marine ecosystems. Many species also have high cultural and societal value and contribute to economies through fishing and tourism (shark diving, for example). They are important for livelihoods and as a source of food for people.

In South Africa, shark fishing has been practised since the 1930s, and today 99 out of 191 species are caught across eight fishery sectors.

In general, sharks and their relatives grow slowly and produce few young. In many cases, this means that their populations are fished out if not managed effectively.

The expert panel found that good progress had been made with implementing parts of the shark conservation and management plan, especially its research aspects. 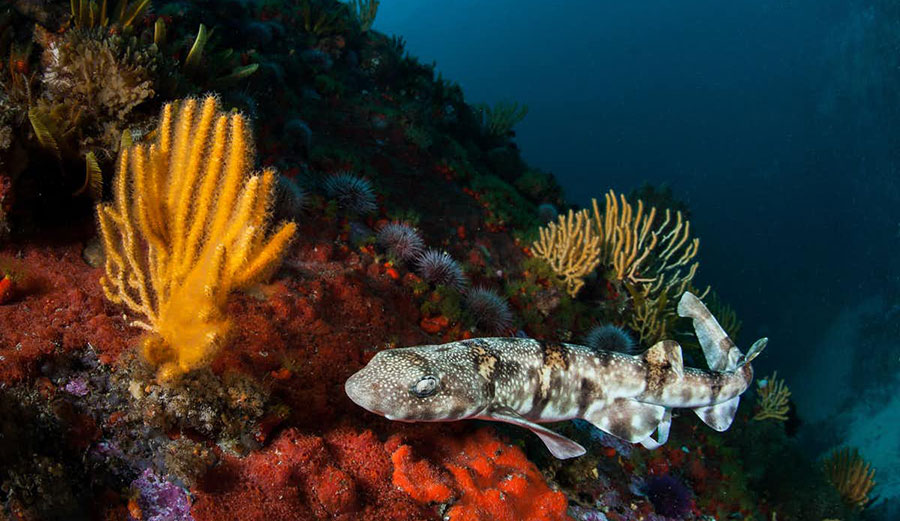 A puffadder shy shark on a reef in the Table Mountain National Park Marine Protected Area. The species is listed as Endangered. Photo: Mark van Coller

Stock assessment: One of the most notable achievements of the plan has been to develop methods to assess the populations of shark species that live near the bottom of the ocean, namely soupfin and smoothhound sharks. Stock assessments determine changes in the abundance of fishery stocks in response to fishing and predict stock trends.

The panel noted that urgent intervention was needed to stop the decline of these two threatened shark species. Soupfin sharks are now critically endangered. But it concluded that the declines of these two species couldn’t explain the sudden disappearance of great white sharks. The evidence suggested instead that killer whales were most likely responsible.

Seafood fraud: South Africa is one of the first countries to ban shark finning – cutting off the sharks’ fins on the boat and discarding the body at sea. A condition of fishing permits is that fins must be attached when the sharks are landed onshore. The country has also developed regulatory guidelines to avoid seafood fraud – the practice of misleading consumers about their seafood to increase profits.

Moderate progress was made in researching the health risks of shark consumption, identifying ways to reduce unwanted bycatch and improving the traceability of shark products from catch to sale.

Monitoring: The Department of Forestry, Fisheries and the Environment has lost some expertise, which limits its capacity to work on shark-related issues. The lack of fisheries observer programmes in many fisheries, and formal monitoring of catches is a weakness.

Minister Creecy has said that the national plan of action needs to be updated and implemented urgently.

The revised plan needs modern systems to monitor and report on shark catches. Technology such as vessel tracking systems and remote cameras on fishing vessels can help improve scientific data collection and combat illegal fishing. An improved scientific understanding of the ecosystem effects of fishing is needed to ensure that management considers the effects of fisheries on marine predators.

Lastly, there’s a need to work out where the money will come from and who can carry out which parts of the plan.

The government recently changed the rules for fishing so as to protect the critically endangered soupfin shark. This has consequences for fishers and for South Africa’s biodiversity.

Progress has also been made on a pilot programme in which cameras have been installed on a fishing vessel to monitor catches and provide data for management.

Dr Charlene da Silva, scientist at the Department of Forestry, Fisheries and the Environment shark resources research branch, also contributed to the panel review and this article.