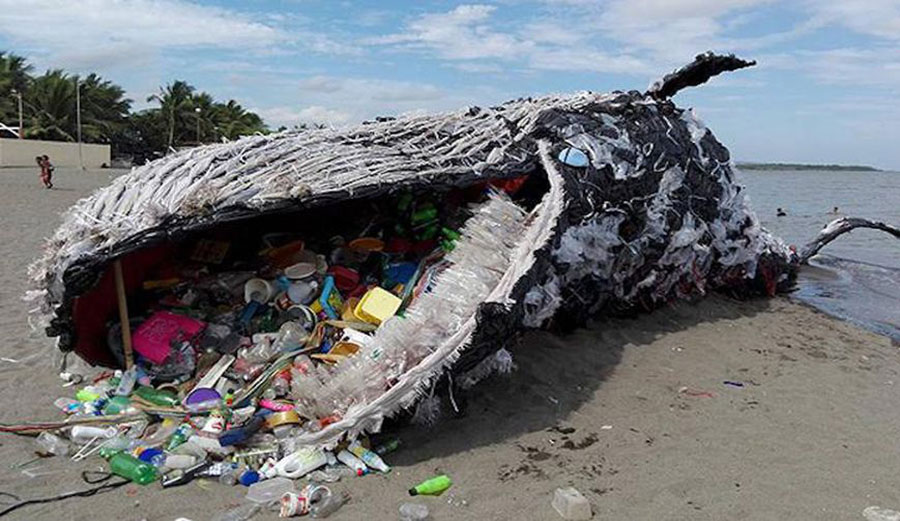 A representation created by Greenpeace Philippines. While it’s not real, it’s getting a little too close for comfort.

Late in February, a juvenile sperm whale washed up dead on a beach in southern Spain. It looked strangely thin, and, as is the norm in cases like this, researchers conducted an autopsy to find out what killed it. What they found was shocking: the whale’s stomach contained a staggering 64 pounds of plastic.

Sperm whales are protected in the United States under the Endangered Species Conservation Act and are listed as vulnerable. They’re an interesting creature—the females care for their calves for a decade at least, and they dive to depths of over 7,000 feet. The only other mammal that goes deeper is the Cuvier’s beaked whale. Sperm whales have enormous brains; bigger than any other mammal in the world and some five times bigger than ours. Of course, since we are humans, we hunted them mercilessly for lamp oil, candles, and perfume ingredients.

According to the El Valle Wildlife Rescue Center, the group that did the autopsy on the dead whale, the animal died from gastric shock to its stomach and intestines. “Experts found the inner walls of the whale’s abdomen to be inflamed due to a bacterial or fungal infection,” wrote Trevor Nace for Forbes. “This is likely a result of the whale unable to expel the plastics from its system, resulting in peritonitis.” Included in the 64 pounds of plastic were nets, various types of rope, plastic bags, and a jerry can.

This beached juvenile Sperm #Whale was found off the coast of #Spain. If it looks emaciated, it’s because it starved to death. In its stomach was 64 lbs of #plastic, causing an infection. Our #Oceans are drowning in a sea of plastic. We need to break our addiction. pic.twitter.com/oICIlyGHJw

It’s been apparent for decades that the vast amount of plastic we produce each day is having a devastating effect on the environment at large. A recent study of the Great Pacific Garbage Patch—which, it should be noted, is only one of many patches that have accumulated in our oceans—is far larger than previously thought. “Our model, calibrated with data from multi-vessel and aircraft surveys,” reads the study’s abstract, “predicted at least 79 (45–129) thousand tonnes of ocean plastic are floating inside an area of 1.6 million km2; a figure four to sixteen times higher than previously reported.”

While it’s easy to point fingers at places like China and Indonesia—an Ocean Conservancy report from 2017 found that China, Indonesia, the Philippines, Thailand and Vietnam are responsible for 60 percent of the plastic in the ocean—it truly is a global issue.

The most surprising thing about the sperm whale’s death is that it’s not all that surprising. Back at the end of 2016, thirteen sperm whales washed up dead in Germany, their stomachs full of our garbage. It’s becoming an almost commonplace thing for animals to literally die because of our voracious need for unnecessary comforts.

I wrote something after those thirteen whales were found in Germany that should be said again. “Humans are a funny species. While most countries no longer kill whales en masse for their blubber or oil, we’re still killing them in a different way. It’s easy to look at small parts of achievements and say we’re doing enough, but when we’ve created a life that is so incredibly self-serving that we’re actually killing other species just by living comfortably, it might be time to take a good hard look at how violently selfish our comforts have become.”