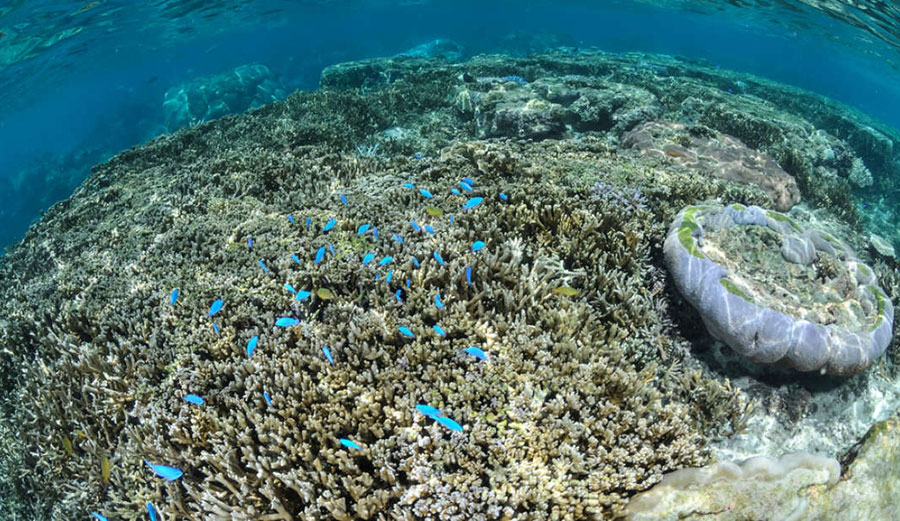 Reefs all over the planet are facing a very bleak future. Rapidly warming ocean and acidic water are killing them all over the planet. Bleaching event after bleaching event is ruining some of the most important of earth’s natural features. No, it’s not just the Australia or Hawaii, although those are probably the ones you’ve heard about. It’s many other reef systems, all of which are home to a massive variety of life. The most recent depressing reef news comes out of Japan, where studies have found that 99 percent of Japan’s largest reef is on the verge of collapse.

According to a government survey in Sekisei Lagoon in southwestern Japan, the reef, which measures 12 miles long by 10 miles wide, is basically dead. Living among it are over 300 different kinds of corals and an innumerable number of sea creatures. Using satellite imagery to figure out how the local reefs were faring, they found that only 1.4 percent of the reef is healthy. So why should you care about this? Well, aside from the all the pretty colors, reefs serve as an early warning system.

A long time ago, miners would carry canaries down into the tunnels. They’d use them as an early alarm system, of sorts–if dangerous gasses built up, the canary would die before the levels reached high enough levels to kill the men. Now, of course, we’ve got the technology to keep both the canaries and the miners alive. But that’s not changing much for the oceans. Coral reefs have become the canary in the coal mine of the ocean, and we’re ignoring all the warning signs they’re giving us.

“We’re seeing complete changes to ecosystems,” said Mark Eakin, Reef Watch coordinator for the NOAA. “If we’re losing over half of the corals in some of the best-protected places, and these events are becoming more frequent and severe, what does the future hold for coral reefs?”

Although the Japanese reef is the most recent one, the destruction of these reef systems is happening all over the globe. There is no doubt in the minds of most scientists that the reefs are dying because of the climate changing. “Rising temperatures due to climate change have pushed corals beyond their tolerance levels,” Hoegh-Guldberg told The New York Times. “It’s a global problem. It needs global attention.”

Coral bleaching in and of itself isn’t necessarily something to be worried about. It happens frequently as the ocean warms and cools with the seasons. As the water warms up, In a nutshell, during warm spells, corals get rid of their algae and turn white. When the water cools down again, they recover. When the water stays consistently warm, however, they die. And the water is not only staying consistently warm, it’s getting warmer.

Unlike many other climate change issues, no one denies that reefs are dying because the ocean is warming at an unprecedented rate—it’s easy to prove, after all, when the proof is just offshore. Japan’s reefs have been in failing health for decades, but much like the rest of the world, no one really took it seriously. In 1991, the government estimated that only 15 percent of the reef was in good health. As is the norm, bleaching events occurred, the reef recovered a bit, then another bleaching event occurred. The problem is that with every bleach, the reefs aren’t able to recover back to their previous level of health. Now, after decades of warming, acidifying oceans, they’re basically past the point of no return.

According to the NOAA, an association made up of people who study the environment with a scientific eye and simply report their findings, climate change is “the greatest global threat” to coral reef ecosystems. Coral reefs play a vital role in the health of our oceans, and if things continue the way they are now—which looks very likely—we’re not going to stop killing them any time soon. “Humankind has been overexploiting natural resources and destroying the natural environment beyond the level at which the environment can restore itself,” wrote the Japanese Ministry of the Environment’s Keisuke Takahashi. “Biodiversity, which is indispensable for human existence, has consequently been depleted. Under these circumstances, we have to change the way that we interact with nature: from a single-sided deprivation of natural resources and destruction of the environment to contributions to the environment from the human side. These efforts should commence while sound ecosystems, which will serve as models and also as sources of species re-supply, still exist around us.”