Super Typhoon Jebi Is Now the Planet’s Most Powerful Storm 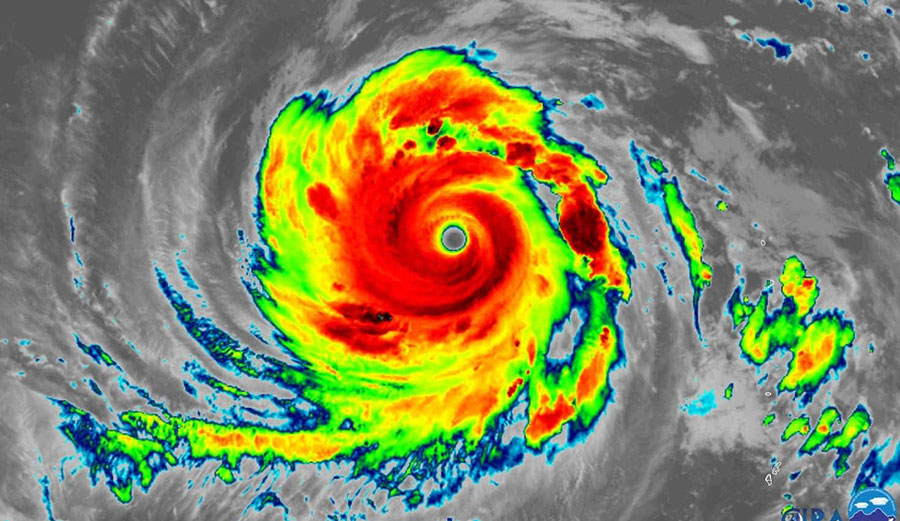 You may have noticed recently that storms seem to be getting bigger. They swirl and whirl and vomit out vast amounts of rain that flood cities. They throw winds that rip off roofs and knock out power to entire territories. People say it’s climate change, but I’m not going to say that because then someone will yell at me through their Cheeto-stained fingers and show links to conspiracy theories. Then the comment section will devolve into a pack of wolves with their balls in a knot, red-eyed and slavering, hackles to the moon and hungry to insult my mother and scientists and truth in general. So I’m not going to say it’s climate change, because if you won’t listen to irrefutable fact, you certainly won’t listen to me. But there is a mother of a storm flinging across the western Pacific right now—the most intense storm of 2018. It’s being called Super Typhoon Jebi, and it’s looking like it’s going to deal a stiff blow to Japan early next week.

Over the course of last week, Jebi gathered steam, turning from a regular old tropical storm to a typhoon to what it is now: a Category 5 cyclone with sustained winds up to 175 mph. According to the U.S. Joint Typhoon Warning Center, it gained all that steam in an incredibly short amount of time. From Wednesday to Friday, it strapped on an estimated 110 mph of wind speed in just 48 hours.

If we’re going by the estimates of wind speed and surface pressure (which we are), Jebi is now the strongest storm on the entire planet. Hurricane Maria’s sustained winds hit 175 mph. Marcus had about a minute of 160 mph sustained winds. Jebi is sitting at Hurricane Maria levels with wind speeds nearing 180 mph and around 910 millibars. Maria, of course, is the storm that flung Puerto Rico’s power grid off a cliff and, depending on who you’re listening to, killed either 60-odd people or 3,000.

As of Saturday morning, Jebi is gathering her skirts and stretching her hamstrings northwest of Guam. Japan is expecting a good lashing on Monday or Tuesday as the storm veers towards the country. As is nearly always the case, however, Jebi will probably blow out a lot of its strength by the time is hits Japan, but it still won’t be a storm to dance with. While it looks as though it’ll be downgraded from a Super Typhoon to a boring tropical cyclone, it’s likely that coastal areas are going to be seriously affected.

Japan, by now, is getting used to it. It’s cyclone season, after all, and this season has been extraordinarily active. Since July, there have been six typhoons to hit the area. Since mid-June, a dozen tropical cyclones have either hit or come within spitting distance. The average, according to The Weather Channel, is four.

Jebi’s course towards Japan comes at a bad time. The country is still recovering from the deadly flooding in the southwest, which was followed by a heatwave that broke Japan’s all-time high. In total, about 300 people have died.