The Australian Bushfires Revealed an Aquatic System Older Than the Pyramids 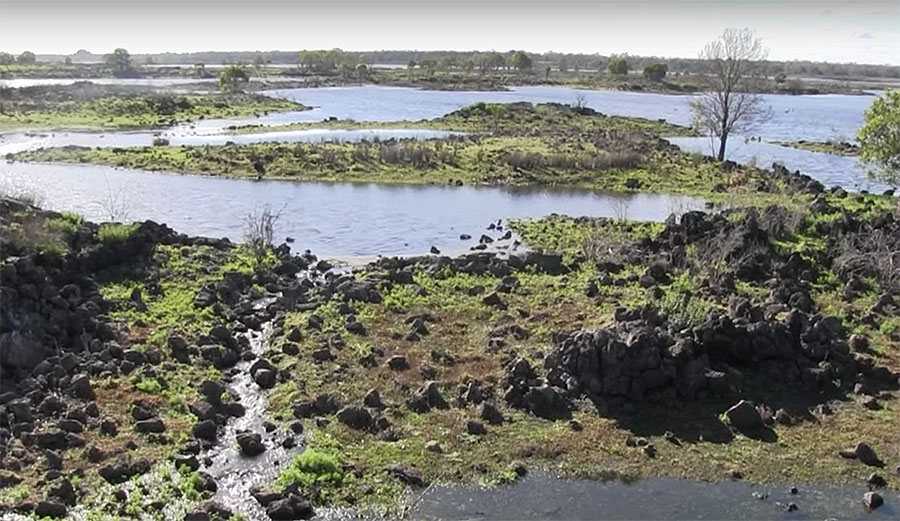 The Budj Bim Cultural Landscape consisted of an extensive series of channels, dams, and weirs used to catch and harvest eels. Image: Screenshot/Youtube

The devastating bushfires that ravaged Australia have done a lot of things. They’ve killed an estimated 1 billion animals, torched nearly 25 million acres, and killed some 30 people. But the path of fiery devastation revealed something extraordinary, as well: a series of extensive water channels built by indigenous Australians around 6,600 years ago. For reference, that’s older than the pyramids.

Called the Budj Bim Cultural Landscape, the channels were constructed by the Gunditjmara people in south-eastern Australia. They are, according to the United Nations Educational, Scientific, and Cultural Organization (UNESCO), “one of the world’s most extensive and oldest aquaculture systems.” Consisting of a series of dams, weirs, and channels, they were used to trap, store, and harvest eels for food. “The highly productive aquaculture system provided an economic and social base for Gunditjmara society for six millennia,” UNESCO explained.

Although archaeologists already knew about the Budj Bim Cultural Landscape (it was added to UNESCO’s World Heritage List in the summer of 2019), the fires revealed sections of the system that were previously unknown. As the bushfires burned away the thick vegetation, the channels were exposed to researchers for the first time in thousands of years.

“When we returned to the area, we found a channel hidden in the grass and other vegetation,” Denis Rose, project manager at non-profit group Gunditj Mirring Traditional Owners Aboriginal Corporation, told CNN. “It was about 25 meters (82 feet) in length, which was a fairly substantial size. It was a surprise continually finding new ones that the fires revealed.”

Although the fires have been knocked back by the recent rains, as of January 21, more than 60 fires are still burning in the states of New South Wales and Victoria. In the coming months, however, as they wind down, researchers are excited to probe the newly exposed areas. “Over the next few weeks, we are hoping to conduct a comprehensive cultural heritage survey to check areas that were not previously recorded,” Rose continued. “It’s important because it provided a rich, sustainable life for the traditional people, and has continued to be an important part of our cultural life.”