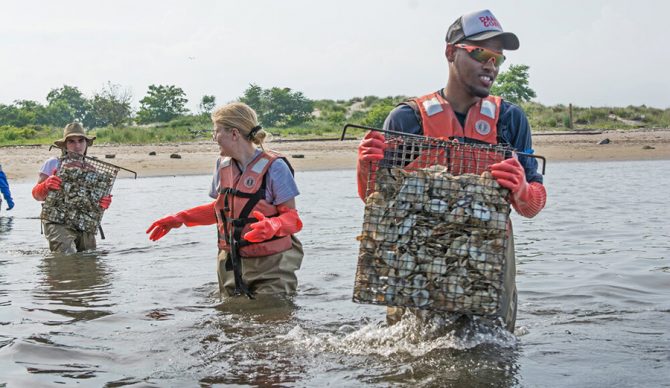 “Before the 20th century, when people thought of New York, they thought of oysters. This is what New York was to the world— a great oceangoing port where people ate succulent local oysters from their harbor. Visitors looked forward to trying them. New Yorkers ate them constantly. They also sold them by the millions.”

By some accounts, oysters were what initially put New York City on the map. Oysters fed princes and paupers alike during the metropolis’ infancy, when street corners were adorned not with Sabrett but oyster carts — until they weren’t.

Little did the Knickerbocker-Club aristocrats and Bowery-dwelling ruffians alike know back then, but the filter-feeding saviors would give way to toxic, heavy-metal-ridden sludge marking the end of their smorgasbord, and the beginning of a veritable cauldron of despair to bivalves for many decades, if not centuries, to come.

By the 20th century, several generations of unfettered population growth and land development had taken its toll on the otherwise resilient sea life in and around the city. New York Harbor and its surrounding waterways, once replete with about 220,000 acres worth of the craggy bivalves, were stripped nearly bare of all oyster beds and reefs, and Gotham turned to other utilitarian nourishments for its up-and-up and down-and-out citizens alike, such as the aforementioned meat-in-tube forms.

Decades have now gone by, and while many of us won’t bat an eye at cramming intestinal casings stuffed with who knows what down our gullets, many more are likely to recoil at the thought of slurping down oysters amidst the trash heaps and subway effluence. And fair enough, you might say.

But slowly, small victories have been taking place in more recent decades as the very big-brained humans who wrought such havoc in the first place begin to come to terms with what is left in the wake of various forms of refuse and industrial waste —1970s formation of the Environmental Protection Agency (EPA) and 1972’s Clean Water Act among them.

Artificial reefs and other synthetic substrates are proving marine life and habitat restoration to be not only viable but scalable. In short, ocean and water environs need oysters as part of a healthy, sustainable eco system to create homes for other organisms, filter water, and act as storm barriers. So how do we bring them back? 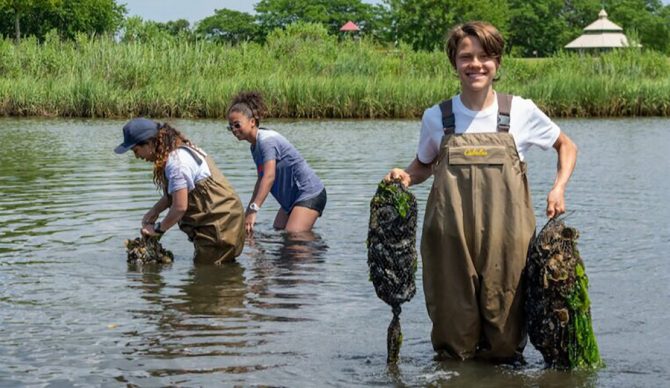 Oysters help filter water, create habitat for other organisms, and protect against erosion. Oh, and if you’re into them, they taste great too. Photo: Billion Oyster Project

In 2014, the Billion Oyster Project, a 501(3)(c) nonprofit organization was created, working to plant at least that many oysters across New York Harbor and the city’s other waterways.

Murray Fisher and Pete Malinowski, the duo behind the project, met while working at The Urban Assembly New York Harbor School: “Pete and I both had the opportunity to fall in love with the environment as kids,” says Murray, who apart from being a co-founder, serves as chairman of the nonprofit organization’s board, “and we wanted to reproduce that feeling for as many kids in the city as possible.”

Less than a decade in, and the project has become a citywide initiative, with educational “Field Stations” in each of the five boroughs and over 10,000 volunteers and 6,000 students to date. More than 75 million oysters are now thriving across some seven acres and counting toward the organization’s goal of one billion by 2035 – though they’re not likely to stop there.

To help replenish beds and establish reefs, the BoP has teamed up with 75 restaurants to collect nearly two million shells from consumed oysters, which are then transferred to reefs, or beds where new oysters can take root. They’ve also partnered with the Surfrider Foundation, organizing beach cleanups and public education and outreach. 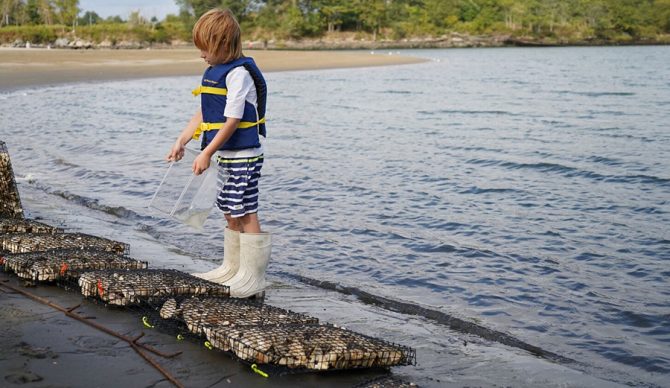 The BOP has everyone involved. Photo: Billion Oyster Project

And how might those one billion oysters-to-be concern surfers? In short, we will probably never be able to look down and see our feet through gin-clear H2O in the lineup around New York, but we will at least experience cleaner water by way of becoming a little less likely to pick up a nasty virus while perusing New York City waters for waves.

Our nearby homes and haunts are similarly bound to stay put a little longer, because even though a billion oysters might not clean New York City’s waterway as much as we’d like, they can help restore shorelines, acting as barrier reefs to hurricane swells and nor’easters, their wintertime counterparts, keeping coastal communities (e.g., surfers) safer.

Could this mean we’ll be surfing over oyster reefs someday soon? No, and praise be to the gods for that. Scraping an oyster bed on a spill, duck-dive, or a hold-down might be the only thing as horrific as hitting dry coral-reef bed.

Oysters rely on rocky substrate or ages-old “beds,” which form similarly to coral reefs building on the shells of oysters past. You might bump the odd oyster along a jetty or derelict piling out in the Rockaways, but no matter how much oysters proliferate, they won’t take to the sandbars that deliver our not-quite-daily bread.

And now that we’re getting down to brass tacks, the final question is whether we’ll ever be able to eat these delectable little gobs again. Sadly, the answer is a resounding hell no — for now.

According to Carrie Roble, vice president for estuary and education at the Hudson River Park Trust’s River Project, we probably won’t be eating city oysters within our lifetime, but if we’re good to Mother Ocean, and play nice, our grandkids just might find themselves slurping down New York City-born-and-bred oysters after slipping through a few cozy brown barrels at the Rockaways someday, good lord willing. And wouldn’t that be something?