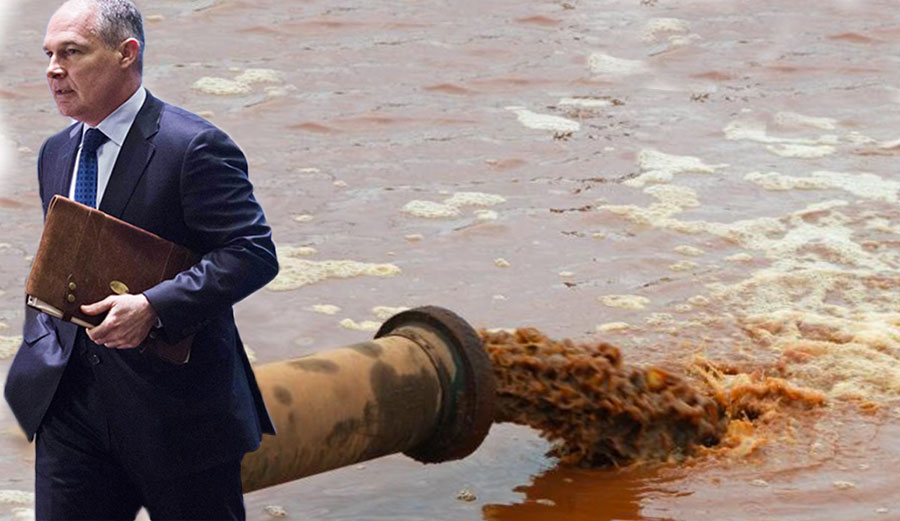 Scott Pruitt, the new head of the EPA, shits on the environment.

On February 17th, the Senate confirmed Scott Pruitt as the new head of the Environmental Protection Agency.

Pruitt, Oklahoma’s attorney general, has sued the EPA more than a dozen times over the last decade or so. Its regulations regarding mercury pollution, carbon emissions, wetlands, smog, and water quality have all come under attack–essentially, he sued the EPA for doing its job.

As was the case with Education Secretary Betsy DeVos, Senators were divided on Pruitt’s ability to be the head of an organization he hates so publically. They voted 52 to 46, with Republican Susan Collins crossing party lines to vote against him. Two Democrats, Joe Manchin III and Heidi Heitkamp, both from states that rely heavily on coal–West Virginia and North Dakota, respectively–went the other way and voted for him.

Despite an order demanding Pruitt’s office release some 3,000 emails with the fossil fuel industry by February 21st (possibly revealing a hand-in-pocket relationship) the vote went through. When the emails are released, there’s a good chance that information will be released that may have disqualified Pruitt.

“I reminded my colleagues that the release of these documents could be imminent,” said Senator Thomas R. Carper regarding a campaign to delay the vote. “We would be wise to wait to vote on Mr. Pruitt’s nomination until we had the opportunity to review them — and shame on us if we didn’t.”

President Trump’s nomination of Pruitt came after campaign trail pledges to dismantle the EPA to make room for looser laws that would allow more growth in the fossil fuel industry. He promised to cut many of the rules targeting carbon dioxide emissions that the Obama administration put into effect, and said he would be able to do that without compromising air and water quality. He hasn’t explained how.

In the face of everyone except those in his immediate circle, both Trump and Pruitt are vehement climate change deniers. Trump also promised during his campaign to pull out of the Paris Agreement, then backpedaled, saying he would “keep an open mind.” In a letter to the Senate, around 800 EPA employees begged for Pruitt’s rejection, saying he had “shown no interest in enforcing environmental laws.”

Pruitt began work quickly, interviewing candidates for leadership positions at the EPA. According to The New York Times, among them is “Oklahoma Republican, Senator James M. Inhofe, who has become known as Congress’s most prominent denier of the science of global warming.”

President Trump famously put a gag order on the EPA last month, shutting down their Twitter account in the process. The month-long silence was broken yesterday with a tweet congratulating Pruitt on his confirmation, despite nearly every employee railing against it.

It’s clear that Scott Pruitt’s position as the head of the EPA will make things easier for the fossil fuel industry, which, to be fair, will be good for the economy in the short term and for millions in the United States looking for work. But while the rest of the world is shifting focus to greener energy–even China is charging headlong into the future–the US is looking backward to a coal and oil powered existence–and backwards is not where we should be facing.