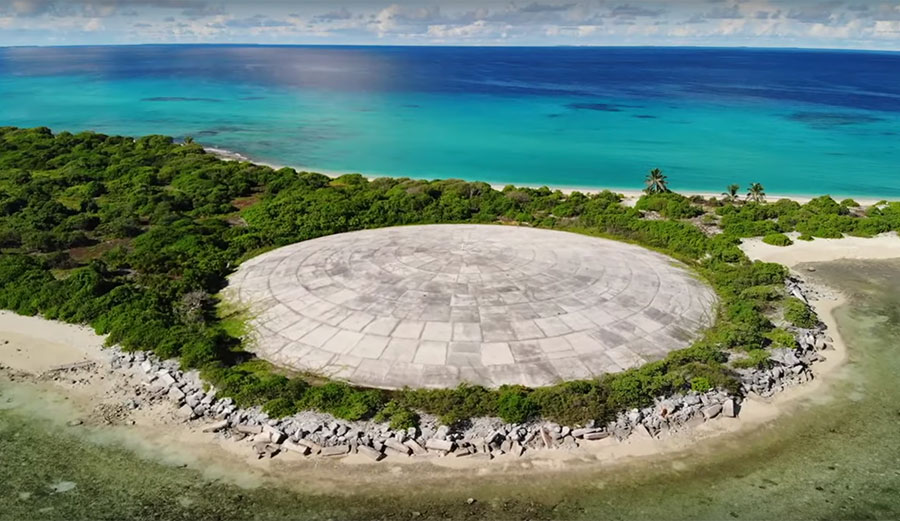 The Runit Dome is the cap over an unlined pit that holds 3.1 million cubic feet of radioactive material. Image: Screenshot/Los Angeles Times

From the mid-1940s to the late-1950s, the United States blew up a whole pile of nuclear bombs in the Marshall Islands. Sixty-seven, to be exact. It was part of the Cold War atomic testing program, and the islands were part of something called “the Pacific Proving Grounds,” (a very different kind of proving ground than the North Shore) and, as one would expect when 67 nuclear bombs are detonated, it left just a bit of radioactive material. The brunt of it was shipped to a massive, unlined pit on Runit Island, mixed with concrete, covered in a huge dome, and forgotten about. Locally, it’s known as the tomb, for obvious reasons. Now, all these years later, that dome is cracking, and UN officials are worried it’s leaking some very bad stuff into the ocean.

“[The dome] is stuffed with radioactive contaminants that include plutonium-239, one of the most toxic substances known to man,” Marshall Islands Senator Jack Ading told the Agence France-Presse. “The coffin is leaking its poison into the surrounding environment. And to make matters even worse, we’re told not to worry about this leakage because the radioactivity outside of the dome is at least as bad as the radioactivity inside of it.”

The Runit Dome has a diameter of nearly 400 feet, and it consists of a 17-inch thick concrete cap that crouches over 3.1 million cubic feet of radioactive soil and debris. It’s supposed to prevent all that radioactive material from leaking into the surrounding environment. But, like everything else, concrete doesn’t last forever. Rising seas and what the Los Angeles Times calls “other effects of climate change” are slowly breaking it down.

“The recent investigation by a team from the Los Angeles Times and Columbia University suggests the dome could be at risk of collapse,” wrote Tom Hale for IFLScience. In a series of five trips, they documented that the dome is covered in cracks that are worsening due to rising temperatures. Rising sea levels are also lapping at the shores of Runit Island, causing it to bleed radioactive material into the surrounding waters.”

The Marshall Islands are in a bad way right now. As the 600 billion-or-so tons of melting ice pours into the ocean, the low-lying archipelago is on its way to becoming an Atlantis of sorts. A report published in 2018 by the Intergovernmental Panel on Climate Change (IPCC) found four atoll nations at a disproportionately higher risk to climate change than anywhere else: Kiribati, Tuvalu, the Maldives, and the Marshall Islands.

With the concerns that the Runit Dome might be on its way to collapse comes a fair bit of anger from residents of the Marshall Islands. According to the Times, officials have lobbied the U.S. government for a little help patching the thing up, but that request has been refused.

“I’m like, how can it [the dome] be ours?” Hilda Heine, the president of the Republic of the Marshall Islands, said in an interview in her presidential office in September. “We don’t want it. We didn’t build it. The garbage inside is not ours. It’s theirs.”