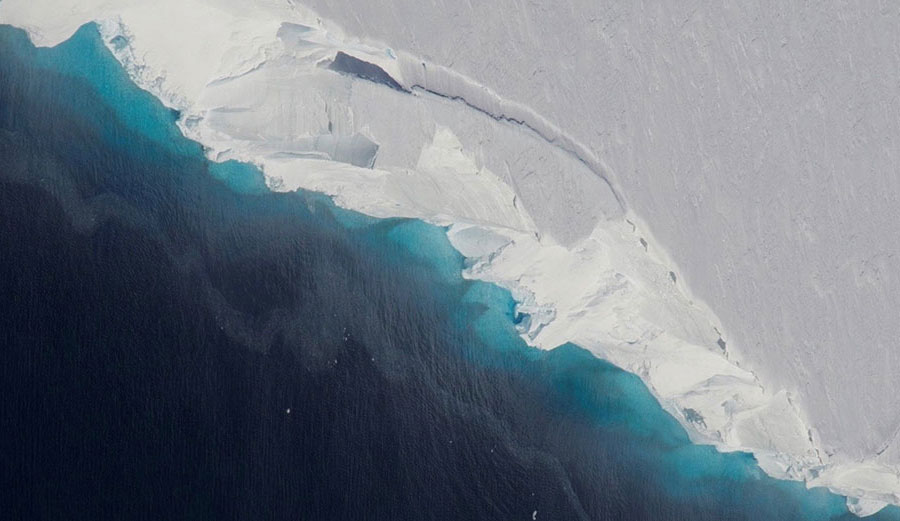 The Thwaites Glacier is in bad shape. Image: NASA/OIB/Jeremy Harbeck

The Thwaites Glacier, a slab of ice the size of Florida in Antarctica, is hanging on by the skin of its teeth. If it collapses entirely, researchers believe it could raise global sea levels by up to 10 feet.

Known as the “Doomsday Glacier” because of the ramifications of its loss, Thwaites is the widest in the world. It’s 80 miles wide, and it’s been the focus of worry for years.

In 2019, NASA released a report detailing a large cavity that had appeared at the bottom of the Thwaites Glacier. About two-thirds the size of the area of Manhattan and almost 1,000-feet tall, it was a harbinger of the possible fate of the glacier.

Thwaites Glacier is no ordinary glacier. It holds enough ice to raise the level of the sea around the world nearly three feet. It also serves as a backstop to glaciers behind it, which, if they were to slide into the sea, would raise ocean waters by about eight feet.

And things are seemingly getting worse. As the planet continues to heat up, Thwaites is in dire straits — and by extension, so are we. Which is why researchers have continued to keep a close eye on it. In a new study published in Nature Geoscience on Monday, the latest results of those close eyes found that things are likely to get worse.

“Thwaites is really holding on today by its fingernails,” study co-author and British Antarctic Survey marine geophysicist Robert Larter said in a news release. “We should expect to see big changes over small timescales in the future — even from one year to the next — once the glacier retreats beyond a shallow ridge in its bed.”

The scientists found that the glacier’s most recent rate of retreat is actually slower than what it has been in last few years. While on its face that may sound like a good thing, it’s actually a bad sign.

“Our results suggest that pulses of very rapid retreat have occurred at Thwaites Glacier in the last two centuries, and possibly as recently as the mid-20th Century,” said lead author Alastair Graham, of the University of South Florida’s College of Marine Science.

According to the researchers, as the glacier thins out, the amount of time before another rapid melting event shortens. The study predicted that the probability of another one could occur “in coming decades.”

“Just a small kick to Thwaites could lead to a big response,” Graham said.