It’s golden hour and the sun is just beginning to tuck itself beneath the horizon. Glassy waves dance under a cotton candy-toned sky. A pod of dolphins swims by, their dorsal fins swiftly and momentarily broaching, just before dipping back below the surface, then back up again. As a set rolls in, the dolphins repeatedly leap through the air with the waves – riding with grace, ease, and camaraderie.

While people in the lineup hoot and holler in gratitude for experiencing such an epic, yet wholesome, interaction – they may very well divert right back to competitively turning-and-burning with the sets that follow, spewing negativity at anyone who gets in their way. We all know that one guy who will howl at anyone whether it’s an ankle-high day or double overhead. Sure, it can be tempting not to put your own surfing first – and overcrowded waves with flying boards can be dangerous. But instances such as these lead one to question the pace and outlook of our own experiences and, perhaps, how maybe we should look to dolphins’ playful and cooperative disposition in the ocean as the best example of lineup etiquette.

Whether dolphins are curiously peeping through the surface, exuberantly trailing in the wake of a boat, interacting with blue whales as they surf together, or bounding through the air next to their fellow human wave riders – people have long been enchanted by dolphins and their behavior. As the ancient Greeks explored the oceans and grew to construct one of the world’s first seafaring nations, dolphins came to appear time and time again in ancient murals, mythologies, poems and texts. More often than not, dolphins are depicted surfing.

“Dolphin behavior is complex – which makes it fascinating but challenging to study,” marine mammal researcher Mackenzie Meier told me. “We do think that surfing is a fun and playful behavior for dolphins!”

Some researchers also hypothesize that these intelligent animals ride the waves for social bonding and communication. Others speculate that dolphins utilize the power of waves to help to dislodge parasites from their skin.While we can’t say for sure that dolphins are surfing purely for the stoke, clearly this is a species that knows what they’re doing – effortlessly coordinating oceanic movement between one another. 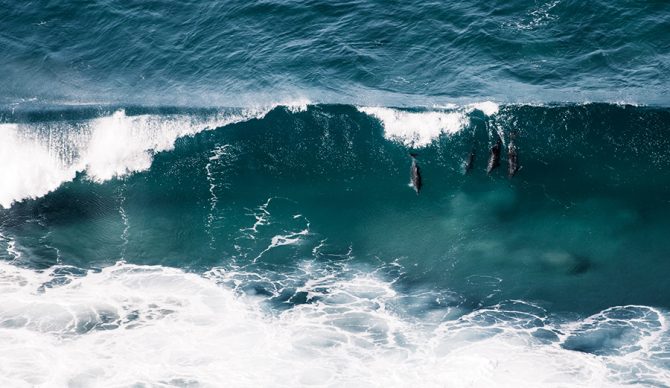 They aren’t picky, either. Photo: Unsplash

With swimming speeds of up to 25 miles-per-hour and a diving range of up to 985 feet in depth, dolphins are some ”effing” strong swimmers. They’ve even been reported using their strength and agility to aid humans – which possibly points to signs of compassion. In 2004, Rob Howes and his daughter hopped into the sea with her two friends for a swim on the North Island of New Zealand. Moments later, the group found themselves surrounded by dolphins, being herded closer and closer inward as the animals swam in tight circles around them. As Howes attempted to stray from the circle, the dolphins only pushed him in closer. It was then that he noticed a 10-foot great white shark approaching. The dolphins kept their guard for an entire 40 minutes, until the shark lost interest and swam off.

“It’s hard to assign altruism to other animals – we can’t ask them why they did something,” says Meier. “However, if there is any traction going in the direction of certain species evolving to be social, we literally need each other down to our genes…so why not be kind?! Cooperation is important.”

Think you’re the true local and that the last wave was rightfully yours? Think again. According to fossil records, dolphins have been riding these waves for the last 11 million years. And based on your lack of disintegration…we’d say that’s at least a few years longer than you.

So let’s try this again. It’s golden hour and the sun is just beginning to tuck beneath the horizon. Blue, glassy waves seem to dance under a cotton candy-toned sky. As a set rolls in and beautiful waves approach the lineup, riders carefully paddle into waves cheering each other on, immersing themselves in the pure joy and playfulness of wave riding – together.

After all, if you’re not thoughtful and jovial when you’re in the ocean, where can you be?