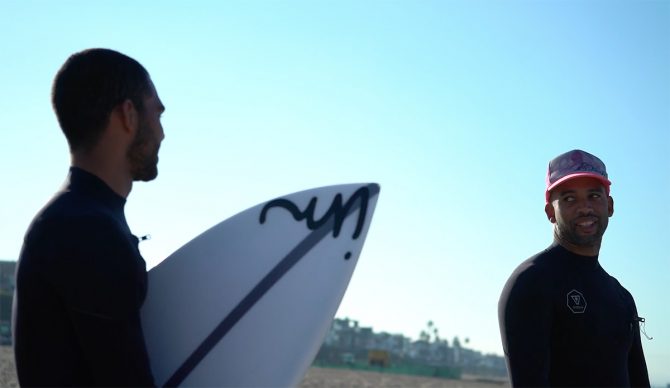 Ryan Harris once thought people only wanted to hear and learn about his industry-shifting, environmentally-minded approach to shaping surfboards. As the Founder of the world’s first zero-waste surfboard manufacturer, he felt like that was his lane. Then the COVID-19 pandemic, which had taken over all things 2020 in March, played second fiddle in the global social conscious for a moment.

“I was dead wrong,” he says. “I realize people do listen to what the hell I have to say.”

May’s revival of the Black Lives Matter Movement across the planet came at a time when Harris was already keeping busier than usual, as stay-at-home orders pushed more people into lineups, creating a refreshed demand for surfboards he estimates equaled about six month’s worth of orders in two month’s time. But with some nudging from his friend, Selema Masekela, Harris moved his platform and influence outside the shaping bay. He helped launch 1 Planet One People, a platform for social and environmental justice. And as an African American man running a business in an industry with few black voices, his became one people turned to for insight. Media started shining equally bright spotlights on his business and his new social advocacy work. It was a lot of change in a couple of months’ time.

“The amount of people involved in just talking about it — I think in sheer numbers — is bigger than what was going on in the 60s,” he says.

This year thrust Ryan Harris onto a bigger stage as both an environmental and social advocate. Even if he didn’t ask for the role at first. Nonetheless, he’s embraced it knowing they aren’t mutually exclusive. “Doing the different fundraiser things we do, we’re literally using our channels and connections to help.”

Our full feature with Ryan Harris is streaming now. Tune in to watch it here and learn more about the rest of our 2020 EVOLVE lineup. EVOLVE 2020 is presented by White Claw with support from Kindhumans.