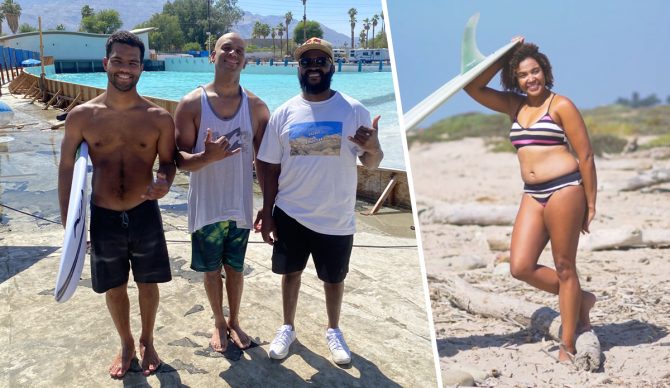 In the four weeks that have passed since George Floyd’s tragic death galvanized an American civil rights awakening, the climate continues to evolve. After furious, sometimes-violent protests engulfed American cities, many well-intending Americans have asked themselves an all-important and surprisingly complex question: What can I do to help? How can I make a meaningful contribution to improve our future?

Four surfers might have the answer. Or at least, they have an inspiring starting place.

“We believe the time is now for us to come closer together,” said 1 Planet One People cofounder Ryan Harris. “We are stronger united, not divided.”

And the unifiers are credentialed.

Masekela has staked his claim as a truth-teller and de facto voice of action sports. Ryan Harris pioneered eco-surfboard technology well before environmentalism became a marketing tactic; He even created the world’s first zero-waste surfboard factory using worms that eat all the scraps. Danielle Black Lyons cofounded Textured Waves, a platform intended to shine a light on underrepresented voices in surfing. And professional surfer Hunter Jones leads a cast of charismatic hosts on WSL’s daily broadcasts.

When Harris saw the horrifying video of George Floyd’s death, he was enraged. He felt like he had to take action.

“After talking to Selema, he lit a fire under my ass. He told me, ‘No one is like you. You do have a voice, and if you’re silent, you’re complicit. So speak your mind, and people will listen.”

But Harris didn’t think Earth Technologies was the right place for his ruminations on race relations.

1 Planet One People is that platform.

“I want it to cover everything and anyone who needs help,” said Harris. “We are all humans. These are basic human rights that we’re fighting for, and we need to establish change immediately.”

“The ocean sees no race, gender, economic background, social standing, or lifestyle,” reads their statement to press. “In that spirit, 1 Planet One People provides a platform to support the environment and communities that have experienced systemic racism, sexism, and inequality.”

“While it’s easy to think of them as separate issues, social justice and our environment go hand in hand,” said action sports icon, Selema Masekela. ”The intersection is undeniable.”

Masekela has spoken extensively to The Inertia over the last decade about his experience as a highly visible African American surfer, thoughtfully communicating the challenges, while offering an uplifting message of hope.

“No matter who you are, where you come from, or what you look like, there truly is no box,” Selema told us. “Every day when you turn on the television or turn on your phone, people are trying to huddle you and gather you in these places where they say, ‘This is who you are.’ I would just like to be part of making that a myth. You are who you want to be.”

1 Planet One People intends to provide a resource with accurate information from experts on critical social and environmental issues.

“Now more than ever, we all really need to focus on loving and respecting each other as humans while simultaneously making a conscious effort to take care of the planet we live on,” said Hunter Jones. “We hope that this movement can inform individuals on the various issues we all face as people and act as a catalyst for change and unity.”

“Many supporters are making generous donations to organizations during the #BlackLivesMatter movement,” said Danielle Black Lyons. “There is an abundance of organizations in need, but it can be overwhelming. We want to help guide people to donate responsibly so their dollars reach the communities they are aiming to protect.”

Harris has pledged to donate a percentage of all eco-board sales from Earth Technologies to non-profits doing great work listed on their site that align with their mission. 1 Planet One People encourages other companies to do the same.

“We launched Juneteenth,” said Harris. “The next day was International Surf Day.”

On International Surfing Day last weekend, Harris hosted an eco-board demo in solidarity with Black Lives Matter at his local surf spot, El Porto. The community showed up, equally drawn to his sustainably-produced surfboards and a call for unity.

The intersection between social and environmental justice has never felt more apparent.

Check out 1 Planet One People for more information, and learn more about Hunter, Ryan, Danielle, and Selema below.