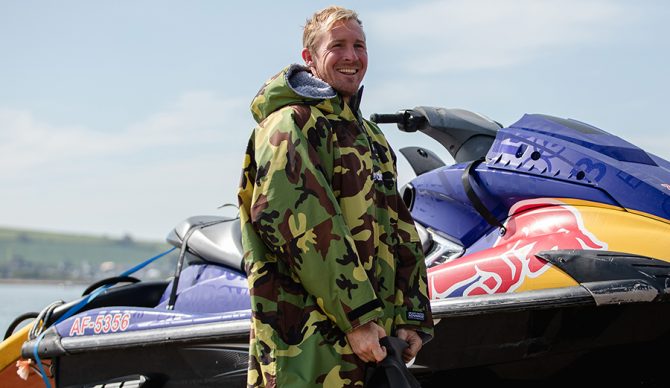 Always in a state of change – Mr. Cotton in his happy place. Photo: dryrobe

Editor’s Note: This podcast is brought to you by dryrobe.

Andrew Cotton won’t tell you this. Ever. But he’s one of the best, and most dedicated big-wave surfers out there. He’s been on the pioneering end of two of Europe’s most iconic big waves: Ireland’s Mullghamore, and of course, Nazaré . The latter of which has certainly captured the world’s imagination. Andrew, as documented in the recent HBO documentary 100 Foot Wave, joined Garrett McNamara early on to figure out the complicated locale. And of course he towed Garrett into the monster that created the hype around Portugal’s famous point of land.

In all that time, the Devon native has seen it all, from equipment evolution, to advances in rescue techniques, and of course, injuries (he suffered a broken back at Nazaré in 2017). That’s why it was so good to catch up with him to talk about that history, and the recent string of “world record” claims coming out of Nazare. One of the most interesting debates spawned from that particular spot is how to measure world-record waves? Andrew and I discussed technology that could make that more exact, and I made him rank the best riders of large surf in the world. We also touched on the economic opportunities, or lack thereof, for big-wave specialists. It made for a good conversation.