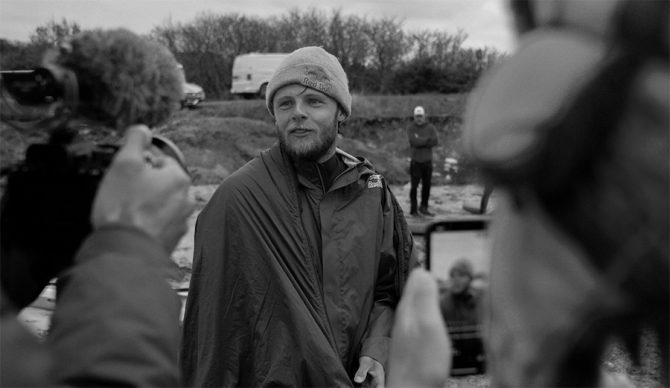 When I asked Casper Steinfath why he embarked on a 1,400-kilometer paddle circumnavigating his home country of Denmark, he resorted to a cliche, yet timeless quote by Edmund Hillary. The first man to scale Mount Everest famously said he did so simply “because it’s there.”

Steinfath, a 28-year-old Danish waterman who has amassed a trove of SUP racing accolades over the years, is approaching his current 900-mile adventure in a similar manner. He is currently underway on the marathon paddle (you can track his progress here).

“Why? That’s the million-dollar question,” exclaimed Steinfath. “But my simple answer is, ‘Why not?’ I’ve always had adventure in my DNA and this is a continuation of my next challenge. I love pushing myself as a human. I felt like I was drawn to this adventure, to know if it was possible to circumnavigate Denmark by stand-up paddle and conquer the seas. It excites me to see what it takes to actually do it.”

Steinfath’s coach of 10 years, Magnus Lindstedt, had a more precise answer when I asked him about Casper’s motivation: “I think he’s driven by wanting to explore both himself and all that life has to offer. Ever since he started SUPing, new paths and opportunities have opened up for him and I think he is inspired to see where these paths lead and if he has what it takes to discover what may be at the end of them.”

After brewing up the idea for a year, on April 2, Steinfath set off from his home of Klitmøller in northwestern Denmark atop a 14-foot paddleboard, with two paddles, and 30 kilos of dry bags containing the necessities for sustenance.

Between powering through the rowdy seas of Scandinavia, navigating hundreds of islands, and even a 40-kilometer haul of his board on land by foot, Steinfath predicts the mission will take 40-50 days.

Even though he already has an impressive resume of endurance paddles that includes a 137-km, 18-hour crossing of the Skagerrak Strait from Denmark to Norway and a 123-km foil between Denmark and Sweden, Steinfath admits that this trip has presented its own unique set of challenges.

“I’ve learned that it’s easy to look at a map and say that I’m going to go from here to there, but it’s a lot harder than I anticipated,” he said. “Spring conditions in Scandinavia mean you can have anything from snowstorms one day to sunny and 15 degrees (Celsius) the next. One day I’m in a wetsuit, another I’m in shorts. Sure enough, I paddled into a snowstorm five days into the project. Nothing is as perfect as you imagine.”

The “most challenging physical part” for Steinfath thus far was a 79-km open-ocean crossing that he did with his brother from Jutland to Zealand. It took him 14 hours to complete, battling strong currents and headwinds.

And while the physical, external journey has provided a worthy challenge, for Steinfath, the journey has become as much of an internal battle. 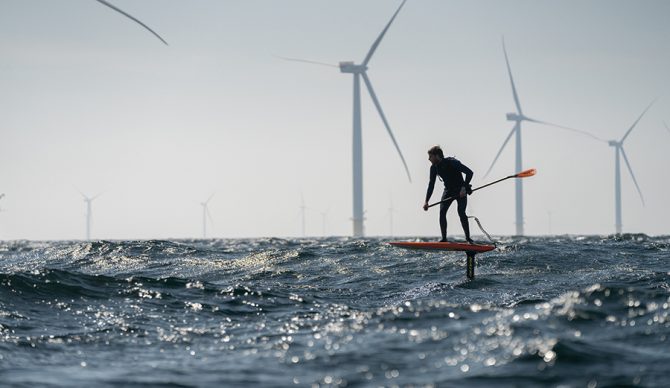 Casper during his Viking Challenge, where he foiled from Denmark to Sweden in 2021. Photo: Red Bull

“I have 6-10 hours a day on the water thinking, ‘What the f*ck am I doing?’” he told me. “I really envisioned a glamorous, heroic trip, but the reality is, I’m laying on the beach in a tent, frozen – way beyond what I signed up for. But at the same time, I know it’s cliche, but the journey is really the destination. Every single morning I need to psyche myself up mentally and somehow find the energy to get back on the water.”

Despite the physical and mental challenges, Steinfath has found the journey rewarding. The silver lining has been the chance to get a new perspective on his home country.

“The biggest highlight has been meeting people along the way,” he said. “I’ve been getting to see corners of Denmark that I’ve never seen before, and my encounters with curious people who ask what I’m doing, sometimes end in them joining me for a stage of the paddle.”

While reflecting on what he’s completed thus far, Steinfath has no regrets, but would have preferred to take a more “humble” approach that included more training and preparation.

“In my head, I thought this would be a piece of cake,” he said. “I’m a professional athlete who has been paddling for 15 years. But I should have prepared, or been smarter, as far as the rough conditions. When I got caught in that snowstorm, part of me felt it was beautiful, but there was also a part of me that thought I was stupid. I could have seen that coming.”

Cutting His Teeth in ‘Cold Hawaii’

While Steinfath has made a name for himself with big performances at international SUP racing events around the globe, it was on the frigid shores of northwest Denmark where he became the athlete he is today.

“Growing up surfing in the cold waters of Scandinavia was always rough and you had to pay to play,” he explains. “That means surfing with cold fingers and numb feet. It instilled a mindset of hunger. I was stoked anytime I went surfing no matter the conditions. Coming from Denmark and trying to emerge onto the international surfing and paddling scene was not necessarily in the cards. I would say that I was from Denmark and people would be surprised that we even have waves to surf. It was looked down on, so I enjoyed breaking down a path.”

The northwest stretch of Denmark’s coast that Casper calls home has started to make a name for itself as a center of Danish surf culture, earning the puzzling nickname “Cold Hawaii.”

“I have no idea why people call it Cold Hawaii,” he said. “The wave quality is nowhere near Hawaii, but I guess it reminds people of a good water culture, hence the name. Denmark isn’t a classic surfing nation, but we definitely have waves”

And while Casper may not have grown up in the true Hawaiian isles, he certainly felt a connection with that water culture, drawing inspiration from its athletes.

“I was very influenced in my teenage years by a lot of Hawaiians – not just the surfers but also paddlers like Dave Kalama, Laird Hamilton, Robby Naish, and Kai Lenny.”

“Surfing in Denmark really only began in the ’90s,” he continued. “We had no strong surfing culture or heritage to look at around us. When I started traveling I was introduced to the Hawaiian watermen and I admired how they approached the water. They were not dedicated to only one craft. It was about harnessing the conditions for whatever craft was best suited. That mindset rubbed off on me and led into the whole stand-up paddling era.”

It was at the ISA Worlds in 2013 that Casper realized that he in fact had a place in the world of elite SUP racing. In an iconic moment forever etched into his memory, Steinfath nudged out his idol, Australian surf and paddle legend, Jamie Mitchell, on the homestretch of the technical race to cement himself and his nation as a force to be reckoned with at the highest level of the sport.

“That moment was a catalyst for me,” he said. “I got a sense that I had a place at the top of the sport. I really looked up to Jamie as a surfer and endurance paddler. He encapsulated everything that I wanted to be. For an 18-year-old kid that was big. I enjoyed that underdog role.”

As far as the recent development of SUP and surfing in Denmark, Coach Linstedt argues that the foundation for the future was largely set by Steinfath: “All the incredible work [Casper] has proudly put in to compete and perform for Denmark is worth many, many more gold medals than he already has. He has been a true role model for so many people, both as an athlete and as a fellow human being.”

After nearly a decade of competing professionally, Steinfath doesn’t plan on slowing down, but he has also re-centered a lot of his focus back home around the surfing talent that has grown in Cold Hawaii.

“[The future for me] will be a mixture of staying on the water myself and using my skills to help make sure Denmark stays on the map,” said Steinfath, who’s getting married in August. “It makes me proud to see a younger generation coming after me now in Denmark. I’ve been paddling [professionally] for 10 years and I get the feeling that we started something here. I really enjoy making a difference by using what I’ve learned to help young talents improve and reach the world scene. We have some incredible young surfers and stand-up paddle racers that could break through in the next couple of years. I want to help them break down more doors.”