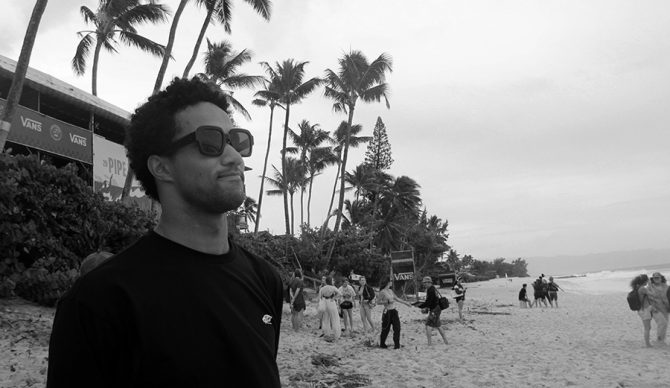 Mr. February, ahead of the Pipe Masters. Photo: JC

Mikey February is one of the most beautiful people on the planet to watch surf. His style defines subtlety – little movement, gorgeous results. It’s an approach that belies the competitive world. That’s probably why he only spent a year on the Championship Tour. But this week, Mr. February returns to competition at the Vans Pipe Masters, where the format has been flipped. There’s no priority, and he’s guaranteed to surf at least three heats. I caught up with him to talk about the contest, the insecurities of being a full-time competitive surfer, and what he has planned for the year ahead.

So how’s it been being away from competition?

It’s been super nice. I’ve been off the tour for several years and it’s nice to be on a different program and a different schedule, surfing some different waves.

You’ve been doing a lot of work with Channel Islands on different boards?

Yeah, I mean competing, I’d just be on a bunch of thrusters that were different sizes. But I feel like now I’ve got like, five boards that are all different and go different in different waves. I’ve mostly been riding a lot of twin fins and it’s been really fun working on that. I think when I was competing, I didn’t really have the time to dial it in and always put so much time and effort into normal shortboards. But it was kinda cool to do that with twin fins because I could actually make such a big difference when I put some effort into working on them. We’ve been working on mid-lengths as well. But Britt Merrick and Devon Howard  – they’ve been leading that whole mid side of things.

How was it being home in South Africa for so long during the pandemic?

It’s good to be traveling again. I mean COVID wasn’t too bad because we could be home and we probably had one of our best winters. So that was really nice. And just to enjoy that. I feel like before, competing, you’d be away for a lot of the winter, which was our best time and I was able to enjoy it.

Would you ever go back to competing full time?

I don’t think I’ll ever get back to that. I mean, I obviously miss competing and that competitive side of things. But I don’t miss  the feeling of losing. I feel like when you’re losing a lot when you compete you’re constantly adjusting, constantly overthinking things, and thinking a lot about every little thing you do.

Sort of makes everyone insecure?

I think you end up being quite insecure, because I mean, that’s the only way you can make any changes and you’re kind of  hypercritical of everything you do. And I think it’s the only way to be because you have to continuously be adjusting. So I really don’t miss that.

I enjoy it. I think one of my best trips was probably when we went to Ghana – that was one of the films that I’ve worked on and it was just something different. I just enjoyed everything about it, you know, the music, the people, all of that. Obviously, you do that with contests, but it’s just different.

You ready to put the jersey back on at Pipe?

I’m excited. I mean, obviously, I feel like going back to competition is so different, and this contest will be so different compared to any other contests. I haven’t really had many crazy good waves out here and not many at all in contests (at Pipe). So I’m really looking forward to this opportunity, having three heats and obviously the different format, too.

What do you think about no priority?

I think no priority is cool. I feel like it definitely depends who you’re surfing against. There are different people who are competitive in different ways. And some people are pretty competitive and will take that role seriously. And then there are other people that will adhere to gentleman’s rules and (follow surfing etiquette).

What do you think about scoring airs evenly to barrels?

I think it’s nice to not live in a box. There’s so many different lines to explore in the barrel. Because when you take off on the wave we can be open to going straight or you can still value that wave and try to do something else. And I think it’s just going to  highlight other individuals’ surfing and what they’re all really good at because everyone’s different. I think it’s going be cool to see it.

From my side, we’re just going to be working on more creative projects involving music and culture. And more destinations and trying to get some good waves and have fun and explore. That’s kind of the plan – just to get good waves.