Editor’s Note: This CREATORS profile on Mikey February is presented by our friends at Quiksilver. Video shot and edited by Tao Farren-Hefer.

The year is 1992. Isaac and Marsha February, Mikey’s parents, are traveling up the coast from Cape Town to attend a friend’s wedding. En route, they stop off at one of South Africa’s most idyllic beaches tightly nestled away in a quiet little valley known as Victoria Bay. Isaac decides to paddle out, noticing graffiti on a nearby wall. It reads “Welkom in die Vaderland”, a patriotic Afrikaans phrase that translates to: “Welcome to the Fatherland.” Isaac sees a group of locals paddle toward him and starts to feel sick to his stomach. They circle him and start threatening, “You’re not allowed to surf here!” It’s not an act of localism, but a rule of law. Isaac and Marsha are unwelcome in their own country.

At the time, South Africa was governed by a political party that had institutionalized segregation and racial discrimination under a rule termed “apartheid” (the word translates, literally, to separateness or segregation). In the apartheid system, white and non-white people were not permitted to mix. Among many of the atrocities the ruling party implemented, one them was that certain beaches were reserved for those of fairer complexion. National signs that read ‘Net Blankes,’ translating to ‘Whites Only,’ grimly adorned South Africa’s most popular beaches, keeping darker skinned individuals at bay. Segregation laws were strictly enforced by the police. Many years before February’s incident, Tom Carroll boycotted the South African leg of the tour on account of what he saw during his time there. On one occasion, a hero of his, Dane Kealoha, was kicked out of a restaurant.

In order to understand where Mikey February comes from, and how big of a deal it is that he’s surfing at the J-Bay Open this week, you have to dive into South Africa’s warped past. We all know the Nelson Mandela story. How “Madiba” saved a divided nation from a civil war. A man who taught us to love those who persecuted, a man who united a divided nation. But the remnants of past political injustices are still evident in modern-day South African society. The white minority still holds access to better education, housing, and jobs. The political party that freed South Africans from the apartheid regime has fallen deep into the throes of corruption, shifting down the gears of change. As they line their pockets with wealth, the lower class, those most vulnerable to a flailing economy, grow increasingly desperate. The story of Mikey’s parents laid the foundation for his success. It’s the story of a young couple that broke free from a mindset of oppression and believed anything was achievable through hard work and faith.

In the heat of apartheid, a time when the best jobs were reserved for whites, when those with darker skin often earned a third of what whites earned, Isaac, unperturbed, approached all the ad agencies in Cape Town with his portfolio in hand. “I received my first brief on a Friday afternoon when no one in the agency wanted to work over the weekend.” Soon Isaac went from a one-man show to running one of the biggest accounts in advertising.  “The account was to service 15 countries in Africa, for ten different beer brands. I was asked to set up my own team to do all the finished artwork and retouching. This is where my life changed. We went from a one-man operation to a studio with nine staff members, working twenty-hour days, servicing different markets throughout Africa.”

Mikey was born in 1993, the year the first democratic election took place in South Africa. He grew up post-apartheid, as a “born free.” Following his father’s interest in the sport of surfing, Mikey soon began spending all the time he could at Muizenberg Beach in Cape Town. His parents noticed his love for the ocean and moved from the industrial hub of Woodstock to the hardy surf town on the outskirts of Cape Town known as Kommetjie. “I really think they made the move for me, because I was spending all my time there anyway,” February told The Inertia.

The wave types found in Kommetjie are some of the most diverse in the world. From playful beach breaks perfect for honing airs, to thundering split-peak barrels, to kelp-laden big waves, Kommetjie has it all. Back when the Februarys relocated to the coastal suburb, the area was a bonafide surf town, a hotbed of surf talent. If your life was the ocean, then Kommetjie was for you. The everyday beach break, Longbeach nurtured South Africa’s most talented surfers. “Every division was competitive, the older guys like, Matt Bromley, Damien Fahrenfort, and Dave Richards were battling Jordy (Smith), and there was a crew of younger guys like Brendon Gibbens, Davey and Benji Brand who I was in competition with,” said Mikey. Apart from that, Mikey’s adopted brother, Josh Salie and his friend Klee Strachan began hanging out at the Februarys newly acquired Kommetjie home, both superb surfers in their own right. Mikey was forced to tag along and keep up. 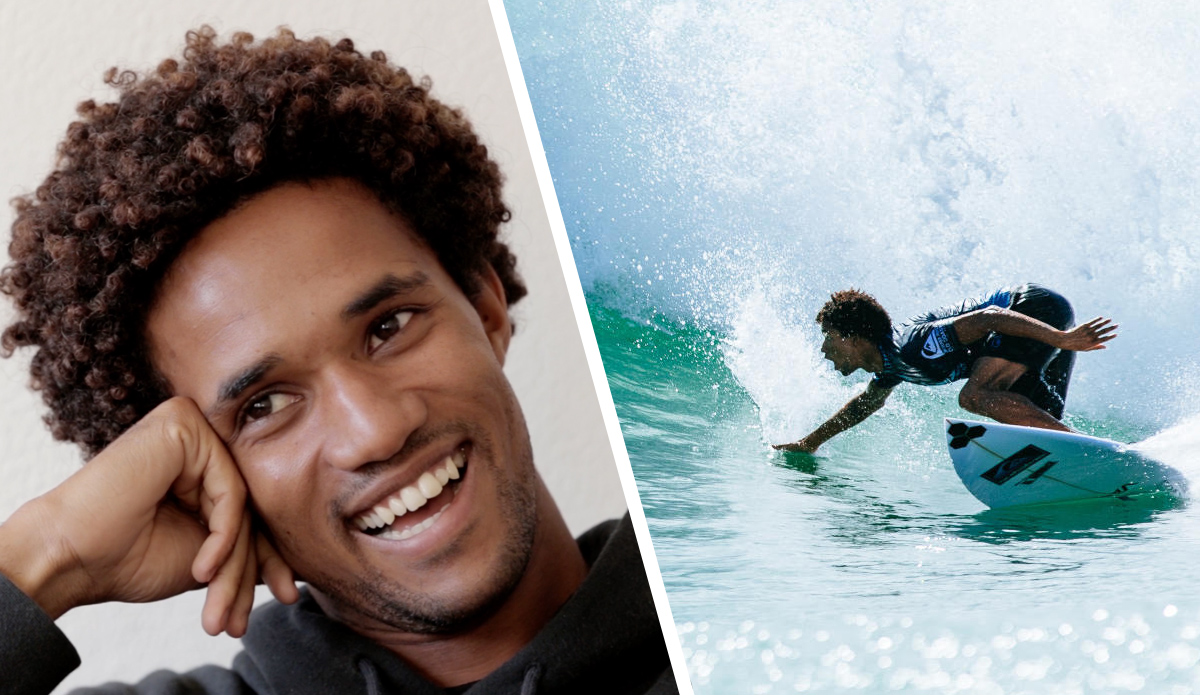 Mikey soon started surfing competitively and quickly excelled. When asked about his most memorable win, Mikey quips, “It was a Billabong Junior event, I was U14 at the time. The main reason I remember the win was because Motorola sponsored the event and the winner of each division ended up getting a cell phone. It was the equivalent of getting an iPhone 8 at the age of 13! It was one of the first camera phones! So I was pretty stoked!”

While Mikey remembers winning what he viewed as a game-changing smartphone, Isaac fondly remembers a different kind of victory. It was in Victoria Bay, and his son had just won a national contest.

“They asked him to make a speech,” said Isaac. “I was busy filming the speech and all he said was,’This one is for you, Dad!’” Looking back at the footage, you can see the camera shake. It was a profound moment, one I will always remember.”

In 2013, February began his slog on the QS tour. Aside from Jordy Smith, nobody from South Africa had made the tour in a number of years. At that stage, making the World Tour seemed far out of reach to any South African. In January 2014, I conducted my first interview with Mikey. He had just begun his QS campaign and things hadn’t panned out the way he wanted. “My goal was to make the top 100 in 2013,” said Mikey back in 2014. It took Mikey three more years to reach the goal he set. By the end of 2015, Mikey finished 90th on the QS. “The main thing was that every year I got better. It may have been a slight improvement, but my ranking on the QS improved every year from when I started… My father always said, a job worth doing is a job worth doing well, and it’s that type of thinking that’s stuck with me.”

But as much as making the tour is a personal success for Mikey, it’s also about a country gradually becoming what Nelson Mandela envisioned so many years prior. Mikey’s qualification isn’t just about a black person making it to the greatest show in surf. It’s about a country that’s healing. It’s about Nelson Mandela’s vision of achieving equal opportunity for all coming to fruition. It’s a triumph over circumstances. It’s starting your own ad agency when the rule of law stands against you. It’s believing in a dream and following it with reckless abandon. The Februarys are a testament to that.

Watch The Inertia’s HEADSPACE with Sal Masekela: “I would like to see a young black surfer make the tour in my lifetime. I will cry that day.”