Sharing Waves: Is It Too Much to Ask?

…and the surfer in front apparently thinking he’s the only guy out. Photo: Tom Servais

If there’s anything more unlikely than surfing Malibu over the Thanksgiving holiday, I’d like to hear about it. But that’s just what happened this year, as a very unseasonable south swell lit up First Point a full month later than could ordinarily be expected. Didn’t catch anybody by surprise, however, as I found myself watching about 40 surfers sharing this Thanksgiving treat, at least figuratively.

Because I don’t have to tell you what was going on out there: the drop-ins, the rail banging, with multiple surfers on each wave, each one determined not to acknowledge the existence of the other, each behaving as if they were the only surfer in the water. Nobody seeming to be having much fun. And for maybe the hundredth time I found myself thinking about how different the Malibu experience would be, if only surfers could learn how to share. With this thought followed almost immediately by memories of how well this idealistic concept worked at three surf spots where crowds weren’t an issue. 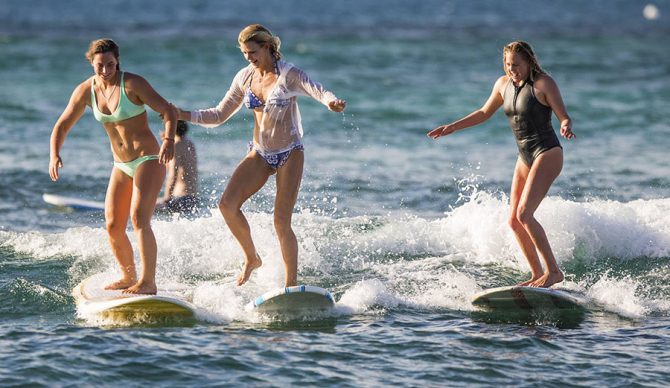 Too much to ask? Not for these suitably enlightened ladies. Photo: Tom Servais

I was up on the Hollister Ranch with Santa Barbara surfer-shaper John Bradbury, sitting in his rusty VW squareback, contemplating a go-out at one of this zone’s most exclusive breaks. Exclusive, in that even during this era of “new owners” the original Ranch locals kept this spot on lockdown, and had since the mid-1960s.  Four of these locals had the lineup to themselves on this day, surfing the tight little tubes that pitched uniformly over an impeccable reef whose configuration included a perfect, dry hair channel. Not that any of these guys cared about that particular feature, as following each ride they very deliberately paddled right back out through the break, as if to be in position to poach an inside section, or, better yet, more quickly establish pole position for the next set.

Trouble was, in such a compressed lineup, with a takeoff spot about as expansive as the VW seats we sat in, the four guys were constantly getting in each other’s way, running each other over or forcing an evasive turn back into the whitewater. After about the 10th ruined ride I turned to John, who actually named this spot, and said, “You guys completely control this spot, and have for decades. Why don’t you just sink a buoy in the channel and tell everyone they have to paddle around it to get back to the lineup. Keep the waves obstacle-free.”  John just shook his head. “That would mean cooperating with each other,” he said. “Actually thinking about the other surfer. Never gonna happen.”

And it never has.

A good friend, and a really good surfer, was telling me about his first trip to Tavarua. This was back when the island resort maintained exclusive access to the region’s two premier spots, Cloudbreak and Restaurants. Unlike Cloudbreak, however, with its vast playing field and multiple takeoff zones, the freight train left at Restaurants peels over an extremely shallow coral reef from a single takeoff spot. To make surfing here with more than three surfers out reasonably safe, the resort insisted on a “next up” protocol, meaning that guests would assemble themselves at the top of the reef and wait their turn, in order. Blow the takeoff, go to the back of the line. Get a hundred-yard barrel into the channel, paddle back out and get in line. “I hated it,” reported my friend upon his return. “It meant that some guy with three years experience and an Amex Platinum card had equal status, and that all the years I spent taking it on the head, getting better, developing judgment, lineup savvy, paddling skills, psychological advantages…all that work getting to the top of the pecking order counted for nothing.”

Which I took to mean was that all that work developing the ability to take a wave someone else wanted had been neutralized. And where’s the fun in that? 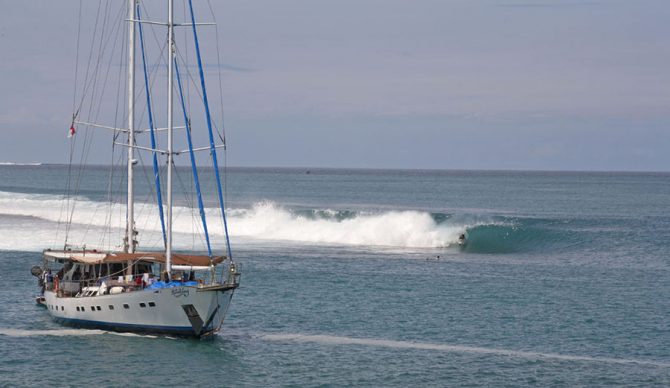 With a bit of cooperation among the Mentawai charter fleet, things could look like this more often. Photo: Jeff Divine.

My brother Matt told me about the time he was sitting on the riverside veranda of the classic Batang Arau Hotel, in Padang, Sumatra, drinking rum with a collection of Mentawai surf charter skippers, as salty a crew of pirates as you’re ever likely to meet. And every man jack of them discoursing on their favorite topic: crowded Mentawai surf spots. The crowds, in this case, being the clients on each other’s vessels. With the whole island chain to play with, literally dozens of surf spots that break on a variety of swells, suitable to a variety of skill levels, and completely empty except for the surfers on their boats…and they’re still grousing about the f-ckin’ crowds. So Matt piped up. “You guys are all part of the same fleet, sitting at the same table, drinking the same rum,” he said. “Why not make a collective agreement to cooperate with each other. If a boat is on a spot first, head to another. Or, for example, if there’s multiple boats at Macaronis or Lances, work out a one-hour-on, one-hour-off deal, so everybody’s clients get to enjoy an uncrowded lineup. You know, share the waves.”

The skippers just stared, Gudangs dangling from their lips, each conjuring a mental image of what a benevolent, considerate Mentawai fleet would look like, would operate like, would possibly offer their clients. Finally one of the saltiest, most experienced skippers broke the spell.

Looking at off-season Malibu now— the drop-ins, the back-paddles, the utter obliviousness when it came to the presence of other surfers — the words of that Mentawai skipper rang clear. If sharing can’t work there, or at the Hollister Ranch or Tavarua, how could it be expected to apply at a spot like Malibu, or the Superbank or Ala Moana, or any other of the well-attended surf breaks around the world?

Like the guy said, that’s just too much to ask.