Gear We Test: Casio PRT-B50, an Everyday Watch for the Outdoor Adventurer 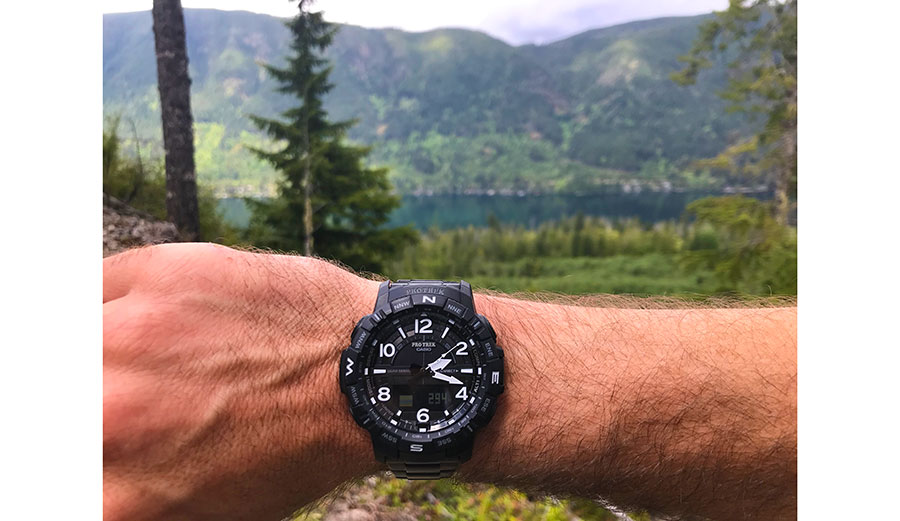 Are you a person who likes going to the top of tall things to look at the view? Me too. Bring this watch with you.

When it comes to watches, I am a man who enjoys simplicity. Give me a watch that tells me the time and date, and I’m happy. I don’t want a watch face crammed full of different graphics, all brightly colored and flashy. But — and here’s the caveat — if you can give me a watch that has all the bells and whistles without sacrificing that simplicity… well, you had me at “hello.” Hello, Casio PRT-B50 series.

This watch doesn’t look like it has all the bells and whistles. It looks like it’s a clean, rugged, stylish thing. A little bit of class with a little bit of rugged mixed in for good measure. Not too big for my average wrists and not too small. It sits there, unobtrusive to the casual glance, but catches the observing eye. Flash is trash, as they say, and the Casio Pro Trek B50 series almost has a bit of a military look about it. But under that unobtrusive finish lies a very smart watch. Inside it, there’s an altimeter, a barometer, a digital compass, a step counter, and even a thermometer. And if you’re so inclined, it’ll hook up to a smartphone — a nice feature if you still want to maintain manual control sometimes but hate the tiny touchscreens of many other watches. It’s water resistant up to 100 meters or 328 feet, a depth you’re very unlikely to get to. The band is titanium, which makes it incredibly light for a watch of its size.

PRT stands for Pro Trek. it’s the line of Casio watches that replaced the Pathfinder, a line of wristwatches that are fantastic for anyone who enjoys the outdoors. Whether you’re hiking, swimming, climbing, or just camping, the Pro Treks will come in handy.

Now, there are Casio watches that have touchscreens and GPS maps and music players and all that, but if you’re planning on leaving the house for more than a day, those are going to die without a charge. The PRT-B50, however, has everything you’re going to need with a battery that lasts about two years. Mind you, I haven’t had this watch for two years so I can’t vouch for that from experience, but that’s what the specs say. With it, you get most of the functions of the full-blown smartwatch without needing a cell signal and a place to charge it.

Like I said before, the Pro Trek line isn’t a small watch. It’s a little on the thick side — 16 mm to be exact — and the buttons on the side are big, which can be a good thing. They’re textured, too, which comes in handy if you’re wearing gloves while hiking somewhere cold.

When it comes to durability, it’s obvious that Casio designed the Pro Trek line with that in mind. The titanium band makes it weirdly light, and the face has a mineral crystal covering. Mineral crystal is a hell of a lot better at not shattering than, say, the sapphire crystal on a lot of the high-end wristwatches. While it is more likely to scratch, mineral crystal will take a big hit without breaking.

Let’s talk tech for a second. The altimeter, which of course determines your altitude, works by measuring the atmospheric pressure changes, which is pretty wild technology to have inside a little thing on your wrist. The barometer is basically a simplified weatherman inside your watch. It takes those atmospheric pressure changes and tells you whether they’re rising or falling. If they’re rising, the weather is likely to get better. If they’re falling sharply, it’s probably time to start heading home, especially if you’re in shorts and a t-shirt.

Having a thermometer on your watch might seem like overkill, but if you’re heading into the mountains, it can be exceedingly helpful. Since temperature generally drops by a few degrees as you go up, using the temperature before you head up will help you predict the temperature when you reach the top of where ever you’re planning on going. No one likes a mountain-top picnic lunch when the temperature is below freezing.

Of course, this wouldn’t be a review if it was all just glowing compliments. The only real issue I have with it is the setup. Call me an old man, but the initial setup was a bit of a struggle. The instructions read like a calculus textbook. Once I had everything figured out, all it takes a bit of doing to remember which buttons do what — something that, if you use it as frequently as I do, doesn’t take too long at all. With all that crushed into a watch that also looks sharp with everyday clothing, the Casio Pro Trek B50 series is a go-to for anyone with an active lifestyle.