Gear We Test: The Super Simple and Rugged Official Watch of the Hawaiian Lifeguard Association 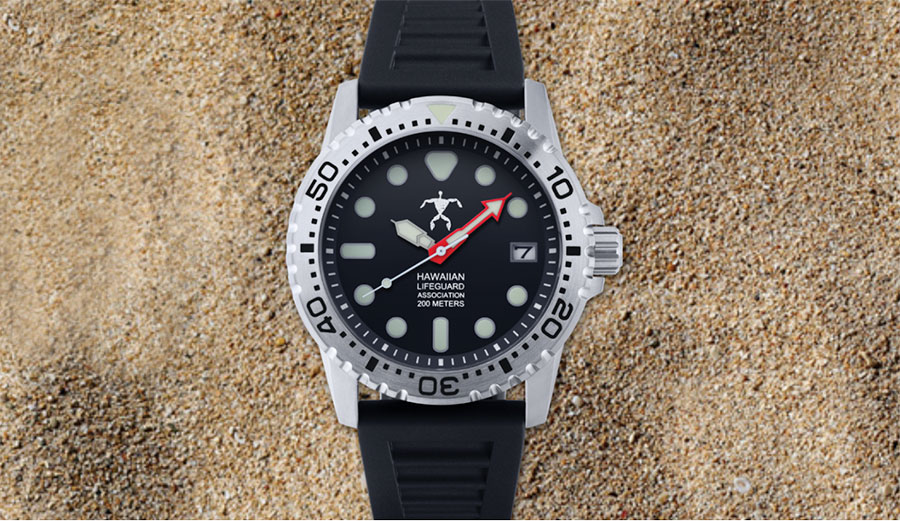 The watches are made to stand up to the enormous power of the ocean, but are also excellent knock-arounds, suitable for most any water environment, whether in Hawaii’s big waves or less challenging situations. Photo: Time Concepts

I have a hard time with my possessions. I break shit all the time. It’s a constant battle, fighting my clumsiness. Years ago, I worked as a snag faller on a wildfire crew, and a common refrain, even when working with generally rugged things like chainsaws and axes, was “he’s tough on rigging.” Meaning, of course, that I broke shit all the time, even back then. Especially watches. My wrists seem to have some strange attraction to hard objects, so instead of consciously trying to be more careful, I’m always on the lookout for things that won’t break when I inevitably smash them. Which brings me to the official watch of the Hawaiian Lifeguard Association, made by Time Concepts.

It’s not a smartwatch. It doesn’t tell you your heart rate or your footsteps or assign a number to how well you slept. It doesn’t play music or answer your phone. It does only what it’s meant to do: tell the time and date. But it will tell the time for a long, long time, no matter what you throw at it. It feels more like a tool than a watch, heavy and beefy and solid. Hawaiian Lifeguards are, of course, the Navy SEALs of lifeguards, so when legends like Archie Kalepa and Brian Keaulana are giving a watch a ringing endorsement, it’s a watch well worth your time.

For lifeguards — and especially so for Hawaiian lifeguards, time is extraordinarily important. When lives are hanging in the balance, every minute and second counts. They need a reliable, easy-to-read watch, and that’s exactly what’s great about the Time Concepts HLA.

HLA watches are built to stand up to the power of the ocean. The key to that is simplicity. It’s a heavy watch, but that weight comes from its ruggedness. Built with 316L stainless steel cases and bezels, the HLA watch has 120-click unidirectional ratcheting bezels for diving, as well as screw-in case backs and crown to ensure 200 meters (a little over 650 feet, which, hopefully, is not a depth you’re at accidentally) of water resistance. It’s made with a highly accurate, low-maintenance Japanese quartz movement and has a face made with scratch-resistant K1 glass crystal, which, as far as I can tell, is pretty much bulletproof.

The strap on it is simple, as well: just straight-up thick rubber. Not leather, not canvas. Just a piece of rubber that will last forever and not fall apart after a few days in the salt. I’ve been wearing mine for a little over two months now, bashing it off gunwales, covering it in fish blood, diving, and dropping it off things, and it looks exactly the same as it did when I pulled it from the box. Last but not least, it comes in at a reasonable $250, and a percentage of every watch sale goes back to the Hawaiian Lifeguard Association to support the incredibly important and dangerous work they do.

Find out more about the watch here.