Australian Researchers Are Testing a New Non-Surgical Treatment for Pterygiums 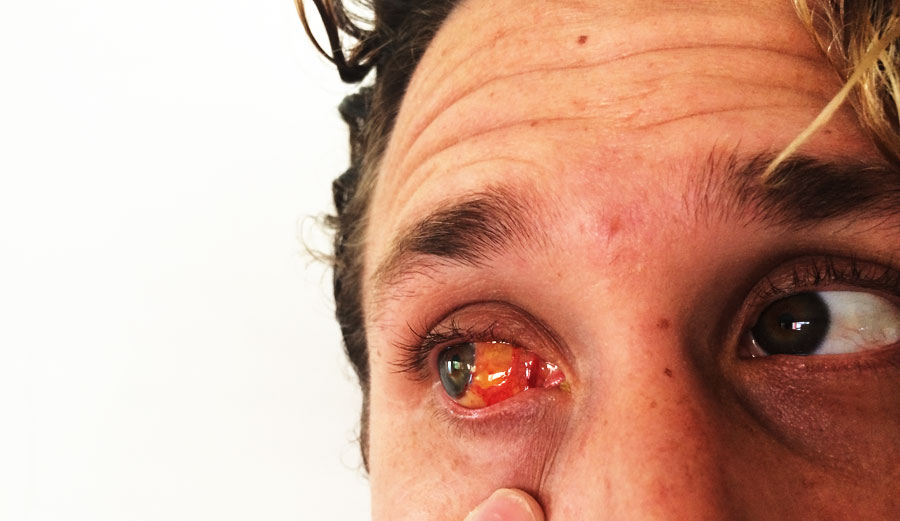 Our own Zach Weisberg went the surgery removal route back in 2015. If only these drops were available then. Photo: The Inertia

Despite their appearances, pterygiums are not, in fact, tiny alien life forms that have come to make house in your eyeball. They’re not living things at all, really. Just tissue that slowly grows on the cornea. The exact cause is unclear, but scientists believe it’s some combination of genetics and extended exposure to ultraviolet light.

Globally, surfers have some of the highest rates of pterygiums. To the point where the condition is colloquially referred to as “surfer’s eye.” Our own Zach Weisberg had one removed in 2015.

Surgery, though, especially on the eye, can be a daunting prospect. Just read Zach’s opening sentence describing his experience: “He slid his knife into my eyeball, and I smiled.” Yeesh. No, thank you.

Thankfully, a group of researchers in Australia is trialing newly-formulated eye drops that could curb a pterygium’s growth or get rid of the fleshy tissue altogether, eliminating the need for surgery.

To be clear, pterygiums in and of themselves are benign. But, many of those afflicted choose to have them removed for fear they might grow over the pupil.

“As it grows, it pulls on the cornea and distorts it and causes a form of astigmatism and in extreme cases, it can grow all the way across and block your sight directly.” Professor Minas Coroneo, a Sydney-based ophthalmologist who is leading the trial there, told News 9 Australia.

Short of surgery, current treatments available to those suffering from surfer’s eye include steroids and anti-inflammatory medications that are not recommended long-term. Depending on the method, surgical removal can also have mixed results in terms of re-growth.

The new drops are a reformulation of a drug called Nintedanib used to treat lung cancer, says News 9, albeit at a significantly reduced dosage.

“The drug knocks off some of the blood vessels that are growing or most of them and also stops some of the scarring,” Professor Coroneo said.

Researchers are hoping to recruit participants in Western Australia, New South Wales, Victoria, and Queensland to test the new drops by May 31. The acronym of the study, the SURPH Trial, is appropriate, but a stretch at best – it stands for the StUdy of the Response to AG-86893 in patients with Pterygium Hyperemia. There’s more info, here.