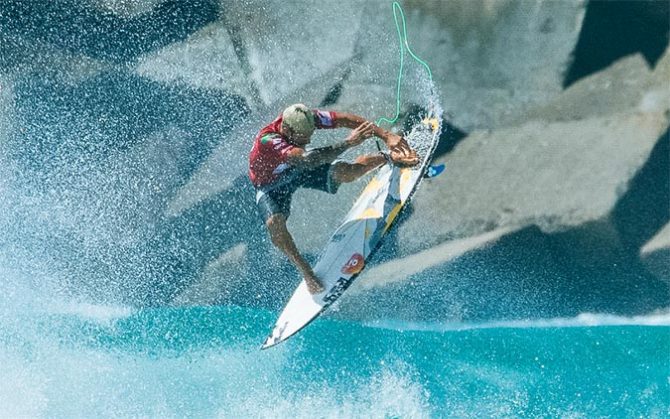 Yep, coffee and “just surfing” gets you here. And a diet that doesn’t include alcohol might help, too. Photo: Dunbar/WSL

After a stellar 2018 season where he won more events than any male athlete competing in 2018 (Bells Beach, Bali, and Portugal), Brazilian flyboy Italo Ferreira opened his 2019 account with a win at the Quik Pro Gold Coast, narrowly defeating Californian Kolohe Andino with a Hail Mary full-rotation air in the dying minutes of the final at Coolangatta’s Duranbah Beach.

A repeat World Title contender, Ferreira has been turning heads since his first year on tour, when he was crowned the well- deserved 2015 Rookie of the Year. Now 24 years old, the man who first won this reporter’s heart with a heavily accented “I am so eh-stoke-ed” after finishing fifth in Tahiti his rookie year is still working on his English fluency, but with the WSL riding high on the Brazilian Storm fan base — and with lifelong pals like Marcos Casteluber around to help translate, as he did for this interview — the only thing Italo needs to focus on these days is staying at the top of the podium and landing the ungodly aerials that have made him one of today’s most beloved surfers.

After conferring briefly in Brazilian Portuguese, Casteluber said Fereirra enjoys physical training in the gym with activities like running and lifting weights to strengthen his legs, shoulders, and back. “This is the part that he loves after the comp, because he knows he needs to be prepared to be competing in big waves. If he’s not, something can go really wrong like broken ankle, knee…because he does a lot of airs, so he needs to work out in the gym to be really…,” Marcos and Italo paused, looked at each other, then said in unison, “STRONG.”

When he’s home in Brazil between contests, Casteluber said Ferreira also works directly with a trainer in Baía Formosa and a physical therapist in Sao Paulo to ease any aches and pains.

Nutrition
When it comes to food, Italo enjoys keeping it home style and simple with Brazilian dishes like barbecue, rice and beans, pastas, and couscous, Marcos said.

Then, proving that some English phrases are more important to master than others, Italo chimed in excitedly, “I like a lot of chocolate, too!”

Fereirra has clearly chosen well, traveling with friends from home since Casteluber knows exactly what foods he enjoys and is happy to prep them for him. “We try to make him feel at home out of home,” Casteluber explained. “So in the morning usually it’s eggs and bacon —” “Bacon sometimes, not every time,” Italo clarified, showing that being health-conscious is definitely on his mind.

“His favorite plate is rice and beans, with meat and lettuce,” Marcos finished, before Fereirra added something we already know. “I love coffee, too,” the naturally energetic Fereirra said with a laugh. So is the WSL video that showed him downing 7 cups of coffee a day accurate? “Almost!” he chirped.

To keep himself in a good head space, Fereirra turns to a trusted source of support for renowned Brazilian athletes.
“He has a mentor called Nunu [Nuno Cobra], he used to be one of those guys for [late, famous Brazilian Formula 1 racer] Ayrton Senna,” Casteluber explained.

For Italo, home is truly where the heart is, Marcos said. When he’s home in Brazil, he loads up on the cruisey good vibes that get him through the stresses of the road by staying at home and watching videos. “When he’s at home, he feels good to go wherever he has to go next,” Casteluber said, adding that keeping the friends and food from home with him while he travels helps to make that cozy, homy feeling last.

For the final and most important question of the interview, Italo had the answer ready to deliver all on his own and it was just as straight forward: “No drugs, no alcohol, no bad vibes,” he said with a grin. “Eat and surf and coffee, and repeat every day!”

Editor’s Note: This is part of our Champs on Health series, where we ask CT athletes for insights on how they train and prepare. You can find more here.