What Is it With Joggers Becoming Serial Poopers? This Guy Was Busted in Oz 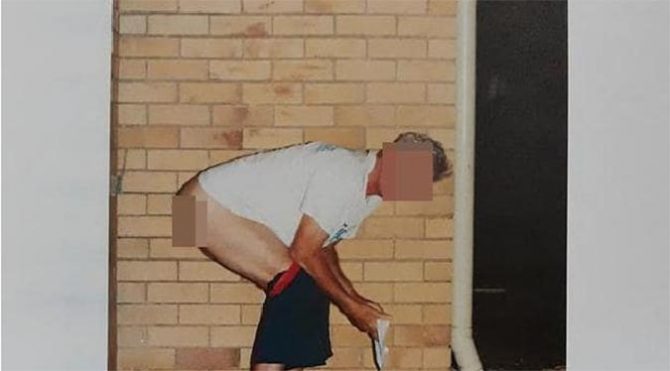 Busted: This serial pooper was taken to task by people living in the neighborhood.

This much is certain: I know myself well enough to tell you with an absolutely straight face that I do not have a fetish for poo. I do, however, have a passing interest in things that turn people into serial anything–serial drug addicts, serial killers–and “serial pooper” just happened to pop up on my radar while news hounding. I swear.

This story stared me in the face: a serial number two-taker from Brisbane, Australia was busted this week. Dubbed the “poo jogger” by locals in the Greenslopes suburb, the gray-haired jogger is estimated to have ducked down a walkway in the neighborhood some 30 times to do the duty while out running. Neighbors became sick of the “disgusting act,” and took matters into their own hands, timing the man’s digestive patterns and finally catching him on camera. Instead of going to the police, residents told local media they hope posting the picture on Facebook would shame him enough, he’d never do it again. We’ll see how that works out.

If the #MadPooper turns herself in, we’ll give her a year’s supply of TP to help with her “runs” 💩 #EnjoyTheGohttps://t.co/GgEAyYp6aM

Poo jogging has become a thing, I guess (or a good excuse for me to use the word poo over and over while doing my job). Another woman terrorized a Colorado Springs neighborhood over this last year, earning the nickname, “The Mad Pooper.” Since her acts became highly publicized, her public defecation has slowed to a mild growl. Her fame even earned her a sponsorship offer from the toilet paper brand, Charmin. In a bizarre twist, a man claiming to be her relative posted a video to YouTube claiming she was suffering from a traumatic brain injury after gender reassignment surgery. He later retracted the statement as false and the ‘Mad P’ hasn’t been heard from since.

While you won’t find any original sources in this piece (I don’t want to talk to someone about their fetish for taking a dump while on a perfectly good run), I will try to piece it all together. What is it with pooping on the jog?

Jamie Wells, a doctor writing for the American Council on Science and Health, actually delved into the cesspool of public pooping in a piece called, “Is Public Pooping a New Trend?” Reading the piece, you can tell she has no idea why these people do this but she theorized that it may have to do with using poo as a means of controlling others, comparing them to kids. “Young children can often act out in ways that manifest stool withholding behaviors,” wrote the good doctor. “Because they can’t sufficiently express themselves verbally, they may obtain control of their parents or an extremely distressful situation by refusing to defecate.”

And that actually lines up. What’s the one thing we absolutely have control of in this crazy world we’re living in (well, mostly, anyway)? Our bodies. I can’t begin to theorize why it’s joggers dropping hot carls everywhere they run, but I do know that people don’t always feel in control–work, taxes, when or how they die. But what they do have (again, mostly) is a choice of when to drop a load. And some people get off by using their shit to terrorize others. Did you hear about that Canadian lady who became upset and chucked her poop at employees in a Tim Horton’s coffee shop (yes, Canucks can be crazy, too)? Playing with poo in public must give these serial shitters a feeling of control.

So that’s it, maybe: a certain brand of crazy finds comfort in dropping loads and using it to manipulate others. I’m not really sure where that leaves us, other than with a really messy ending.