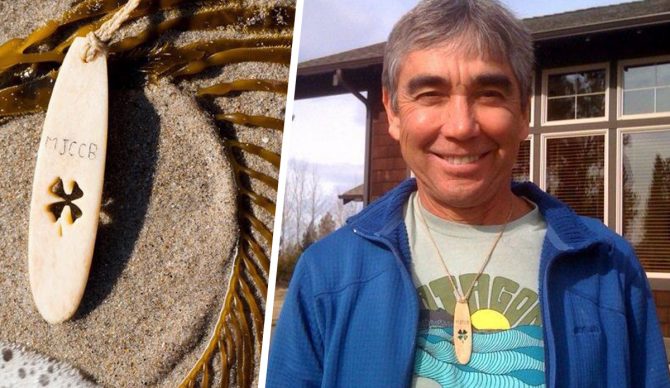 “I wish I traveled more. I always wanted to see Hawaii,” my mother whispered, reaching for my hand as we lay in her bed.

I gently held her smooth, cool hand, stroked her soft white hair which was now fragile from chemotherapy and confidently replied. “Then you will.”

I had no idea how I could make this possible, but I did know then that I would not, and could not, deny anyone their dying wish. Certainly not one wished by my own mother.

Lying there quietly I rubbed my surfboard pendant like a worry stone hoping somehow it could grant her this wish. The little whale bone pendant was carved with her initials on the back, MJCCB. It had been made after her diagnosis to remind me to be safe whenever I was alone in the open water. It was only months earlier that we’d learned she had pancreatic cancer and so I had the pendant made, knowing it would house her spirit.  What I didn’t know, what I could never have known, was that that little surfboard pendant would hold far more than her spirit and far more than I could have ever imagined. So as I rubbed it I wondered how I could get her halfway around the world. She just smiled, gently touching the mustache the cancer drugs gave her, knowing somehow, I would.

I didn’t even know a single person in Hawaii. Not even the friend of a friend of a distant cousin. Quite literally, the only person I could think of was 5,000 miles away and still even he wasn’t in Hawaii, my surf hero and real-life hero, Gerry Lopez.

On a wing and a prayer, I emailed him a simple request, asking if he could wear my pendant in Hawaii, believing my mother could see paradise through his eyes. Immediately, Gerry replied with an answer that changed the course of more lives than I could ever count. Of course, he would help. His family had recently been visited by cancer and he understood the words I struggled to type.

I didn’t know what to expect when I’d sent that email. He had no way to know or likely even care that people dubbed me the “small wave ambassador” or knew that when big sets rolled in off Piha, New Zealand, I burst into tears and had to ride my board in on my tummy, crying the entire way to shore. Although I drive the two-hour trek to my small break in Rhode Island as often as possible, the truth is I am a terrible surfer. I fall more than I stand, I shake with exhaustion trying to get my boots off and on more than one occasion that pendant reminded me that safety must be my priority.

He didn’t know any of that but even if he did he would have helped anyway. We help each other as surfers, even in high winds, weird vibes and heavy chop. We reach out to those who are in distress. Gerry did just that.

I immediately packed up my little pendant with a journal he could write in and sent it off to his home on the West Coast.

“Can Dad come with me?” Mom asked, not fully understanding how her wish was going to be granted.

“Yes, of course,” I whispered as she dozed off to the place somewhere between sleep and death. She was making her way up the rungs of the ladder to Heaven with each breath and I knew time was of the essence.

Because Gerry responded so quickly and kindly, I immediately began thinking of other watermen who might want to help by wearing the same pendant. With each email I sent, a reply came almost as fast saying, “Of course” to such a simple request. All would help, all would be honored, and everyone understood what I was asking and why. Now aptly named the “traveling pendant,” it would go on to travel the world with a surf photographer, a shark diver, many more surfers, and continue to gain momentum. Before I knew it people from around the globe were not only wearing it and documenting their time with the pendant, but the list of people waiting to wear it was growing at a steady pace.

Setting a path that seemed its own, the pendant took nearly three years to find a quiet place on a beach in Hawaii where Haumea Ho (Don Ho’s widow) said a prayer, thought of Mom, and placed flowers upon the water in her memory. Gerry Lopez was the first to say yes, the first to wear it (although not in Hawaii) and the first to set in motion a five-year project of peace. A symbol of faith that offered hope to the hopeless and love to the hurt, the traveling pendant changed the course of hundreds of lives all because a stranger said yes.

My mother died peacefully just a few weeks after Gerry wore the traveling pendant for the first time, knowing that although her time on this planet was over, it really wasn’t.

Editor’s Note: Christine Brooks is a New England-based writer and poet. Her book, The Cigar Box Poems, is due out in late 2019.