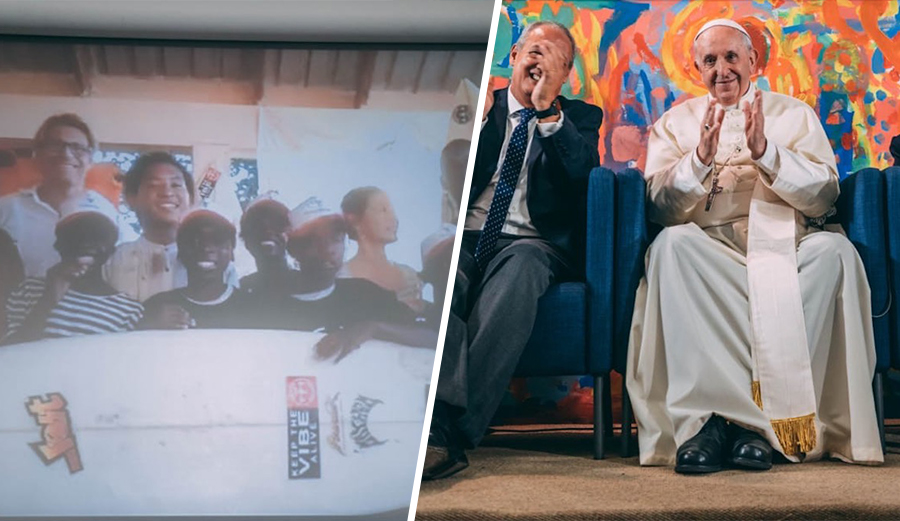 “Yeah, it’s a crazy story!” said Tom Hewitt in an email. Tom is the founder of Surfers Not Street Children, a non-profit out of Durban South Africa that has been instrumental in raising awareness of and trying to find a solution to a phenomenon called street children, or youth that live on the streets.

South Africa, like many developing countries, deals with elevated levels of homelessness among youth. Kids end up living on the streets, often resorting to lives of crime and drugs as a result. Surfers Not Street Children, as Tom has explained to me before, lends these kids surf equipment and gets them so fired up to surf that negative outlets often fall by the wayside.

What does this have to do with the Pope? I’ll let Tom explain:

“Basically, we’ve been looking to expand into Mozambique for a while. We’ve been planning a chapter in Tofo (think epic point breaks, warm water and heaps of local need among a cool, vibrant community). I’ve been visiting Tofo to surf since just after the civil war.

“Anyway, last year, as you know Kelly featured us in his video Continuance Part 2 (by Alek Parker). It was so rad for us as it really put a spotlight on our work.

“Unbeknown to us, or Kelly, a guy working for an organization called Scholas Occurrentes saw the Kelly edit. The Pope founded this organization before he was Pope and is still the figurehead. This guy called me from Argentina and said, ‘Hey we’d be keen to work on a project with you, have you got any ideas?’ I said ‘Yeah, man, Mozambique!!’ He said, ‘Can you come to Rome and brief Francisco?’ (Yeah, that Francisco!) 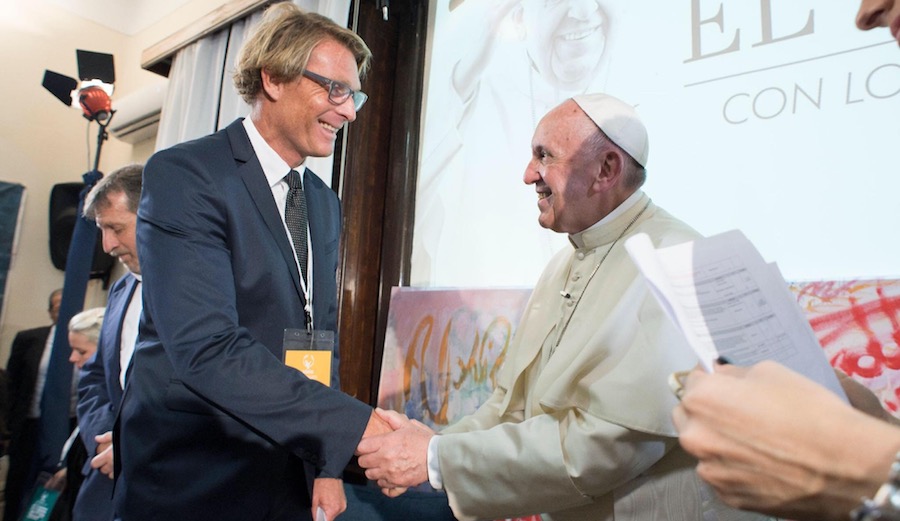 “I went to Rome and met with the Pope and here’s the thing. Everyone knows he loves helping the poor and disenfranchised, but what we didn’t know was that he loves the idea of surfing! I mean, he seriously digs it. He was so stoked about the Tofo project and his organization has partnered with us around supporting it.”

Surfers Not Street Children opened Tofo Surf Club on May 10th – it combines mentorship and coaching to develop kids’ surfing talent and inspire them. All the club’s staff are locals including Mini Cho (19), one of Mozambique’s best surfers, and his brother Junior (12). Both serve as role models to the kids at Tofo Surf Club. 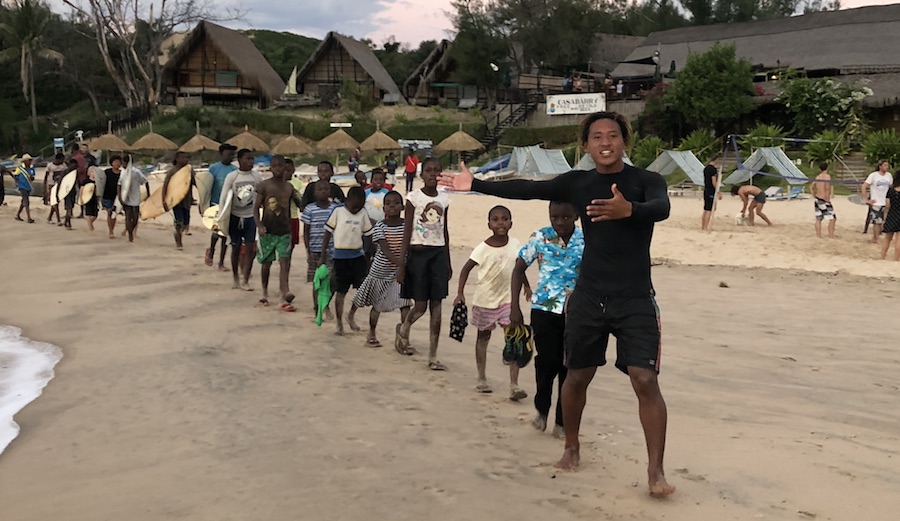 Mini Cho about to take the kids in the water. Photo: Hewitt

To commemorate Tofo Surf Club’s launch, the rest of the crew spoke to Pope Francis over Skype, who blessed the project.

“We’ve been pretty fortunate with some epic supporters such as Prince Harry and Kelly Slater…the Prince, the King, and the Pope is a pretty awesome line-up!”

The Gudauskas’ brothers’ also ran a board drive late last year to support Surfers Not Street Children, some of which are now in the hands of Tofo Surf Club surfers. How’s that for a feel-good story?

CAN’T STEAL OUR VIBE🙏🏽 We are so thankful for all the support for the #cantstealourvibe surfboard drive. It started off as an idea with @patrickgud @danedamus @tannergud and @mikeyfebruary to help support foundations @surfersnotstreetchildren and @wavesforchange to provide them with surfing equipment to help provide a positive outlet to the community. The sport of surfing is used as therapy for many of these kids and to see the surfing community rally and give back STOKES 🙏🏽🙏🏽🙏🏽 us out more than anything. This couldn’t have been done without the support from @jackssurfboards @surfride @prooflab @wsl @freelinesurf @fleahab for being a drop off location and making this process run smoothly. Also to @surfindustries _ for donating 80 beginner boards to help the first experience in the water become a positive one. Lastly thank you to all of you who found a surfboard, wetsuit, boogie board or any equipment to donate to this board drive. You made this possible and the journey to bring positivity into the lives of thousands of kids starts today. 📸: @jimmicane #PassthePositivity #keepthevibealive