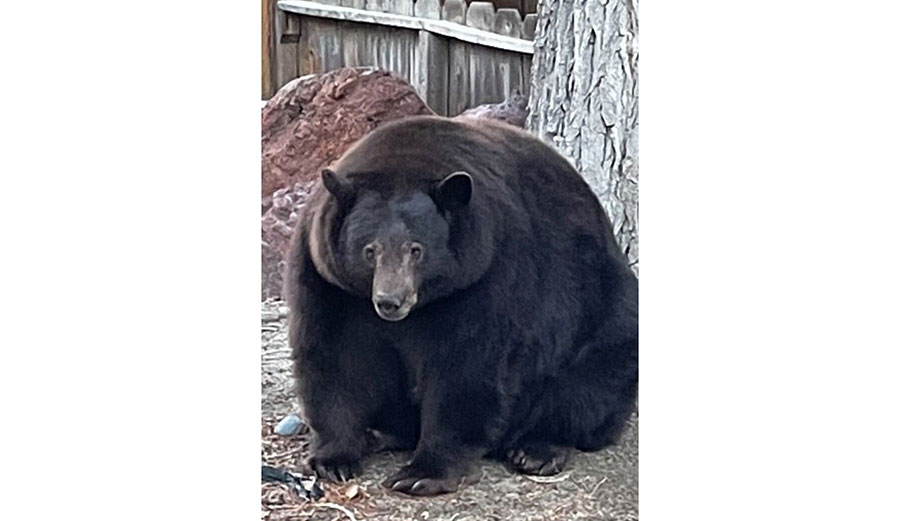 There’s a reason for those “Don’t Feed the Wildlife” signs you’ll see in towns with a little less pavement than a big city. Feed a bear, for example, and it learns that your garbage can is an easy meal. It’ll return. It’ll get a little too comfortable. And then, if it gets to a certain point, the bear will be killed. Such is the sad case for an enormous black bear in South Lake Tahoe, California. Tahoe Keys is a waterfront gated community within the city, just 20-minutes from Heavenly Ski Resort.

I live in a very small town on the West Coast of Canada. In the spring, it’s not uncommon to see a drowsy black bear stumbling up our driveway. Last year, in fact, I was running my dog up a mountain. We rounded a corner, my handsome boy running ahead of me, tongue lolling and ears flopping. Suddenly, he stopped and released a very strange single bark, then retreated in a panic. When he stopped behind my legs, I realized that, not ten feet ahead of me, what I thought was a large stump was actually a large bear sitting on his haunches. I waved and yelled as one is supposed to do with black bears. He looked at us, stood up heavily, and lumbered away, seemingly not too disturbed by our intrusion. Later on in the week, I awoke to find the entire back wall of our garbage shed had been torn off and the contents strewn about. Nothing happened to that bear — at least not that I know of — but it’s pretty damn common around here. I like the fact that we can generally share our space with wildlife, but we can only do that because everyone in town knows that garbage should be locked up, hard to get to, and not an easy meal for bears and the like.

But the California bear, known as Yogi, Jake, or Hank the Tank, has been causing a lot of trouble in South Lake Tahoe. The bear is somewhere around 500-pounds (which, one would assume, may have something to do with the amount of garbage he’s been consuming) and according to reports, it’s damaged nearly 40 homes and prompted 150 emergency calls.

The bear has been on the loose for months now and residents have come to know it on sight. Now, California Fish and Wildlife officials are going to deal with it by killing it. “Paintballs, bean bags, sirens and tasers cannot keep the 500-pound animal from seeking leftover pizza and other food,” the New York Times reported.”

To put the bear’s size into perspective, the average black bear in the western United States weighs 100 to 300 pounds, according to the Washington Department of Fish and Wildlife.

“The trapping activity is a measure of last resort to capture and euthanize a specific, and what we call a severely habituated or human-food conditioned, black bear,” wildlife official Peter Tira told KCRA. “For months – and despite hazing and other mitigation efforts, the target bear has caused extensive property damage and forcefully entered several homes.”

Of course, no one wants to kill Yogi. “It is the point of no return for this bear, but the public needs to fix the things that brought us to this point, or it will continue,” Jason Holley, a supervising wildlife biologist at the Fish and Wildlife department, told the Independent. “This is hard on staff, they don’t become biologists to kill.”

Animal activists, however, aren’t too happy with the plan. An aptly named non-profit, BEAR League, says that some residents are livid with bear traps that have been set up. Some residents of South Lake Tahoe are calling for the bear to be relocated to a sanctuary. The BEAR League places the blame at the feet of home owners who aren’t doing enough to secure trash.

“New out-of-town owners left food in the garage with a wooden door,” the group wrote on Facebook. “Neighbors told them the bears would break the door to get inside. Owners were not willing to make changes. Bear came back, got into the garage again. Rather than fixing the problem the owners called for a trap. It arrived today. The neighbors are furious.”

It is, however, a reality that problem bears — often called dump bears where I live — can be dangerous. Generally, black bears just want to be left alone. They’ll run away unless a cub is involved or they’re cornered, but when they learn that humans are both a source of food and not a threat, things can become a little iffy. When a bear becomes too reliant on humans as a food source, they can lack the basic skills to survive in the wild, which can lead to a slow and agonizing death. This is the case with Yogi, according to the Fish and Wildlife Department. And while the bear is still on the loose at the time of this writing, its future looks bleak.

“You relocate a bear like this, you relocate a problem to another community,” Tira, a spokesperson for the CDFW, told the New York Times. “You relocate it to the wilderness, and they starve because they’re not used to hunting for food. They die a slow, agonizing death… It’s a stressful environment. They can suck up veterinary resources and time. And there may not even be a facility that can take the bear in at this time. We may not be able to get permission, and there’s lots of laws that restrict and rightly safeguard the movement of animals across state lines.”