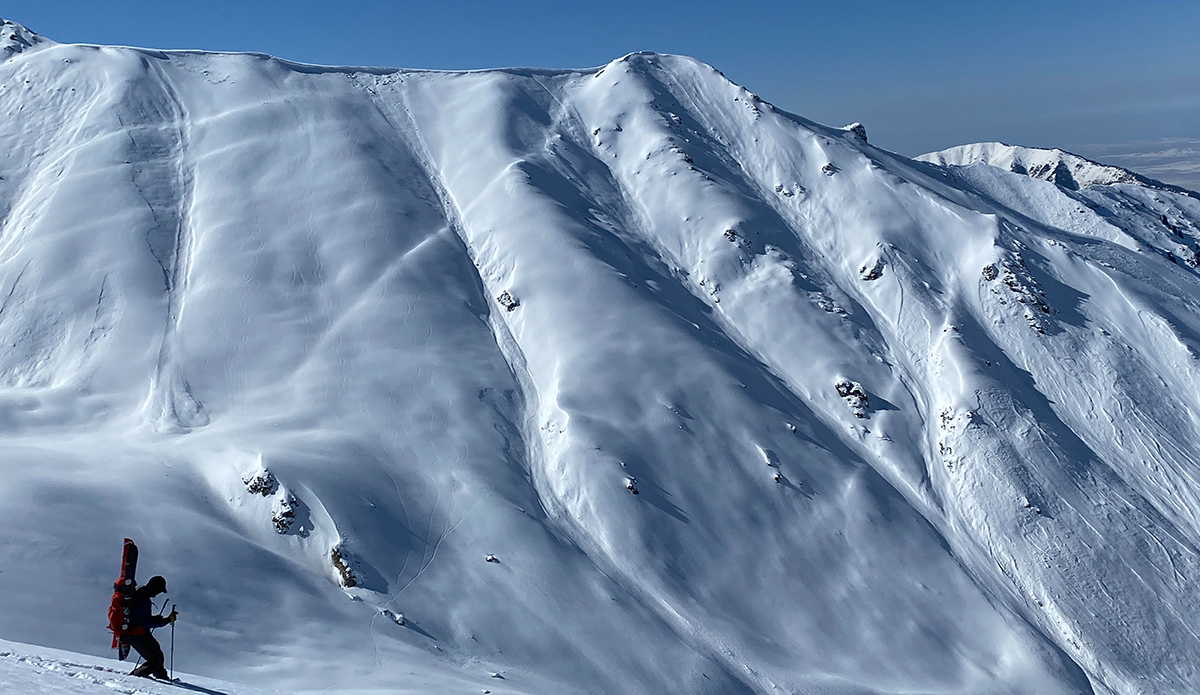 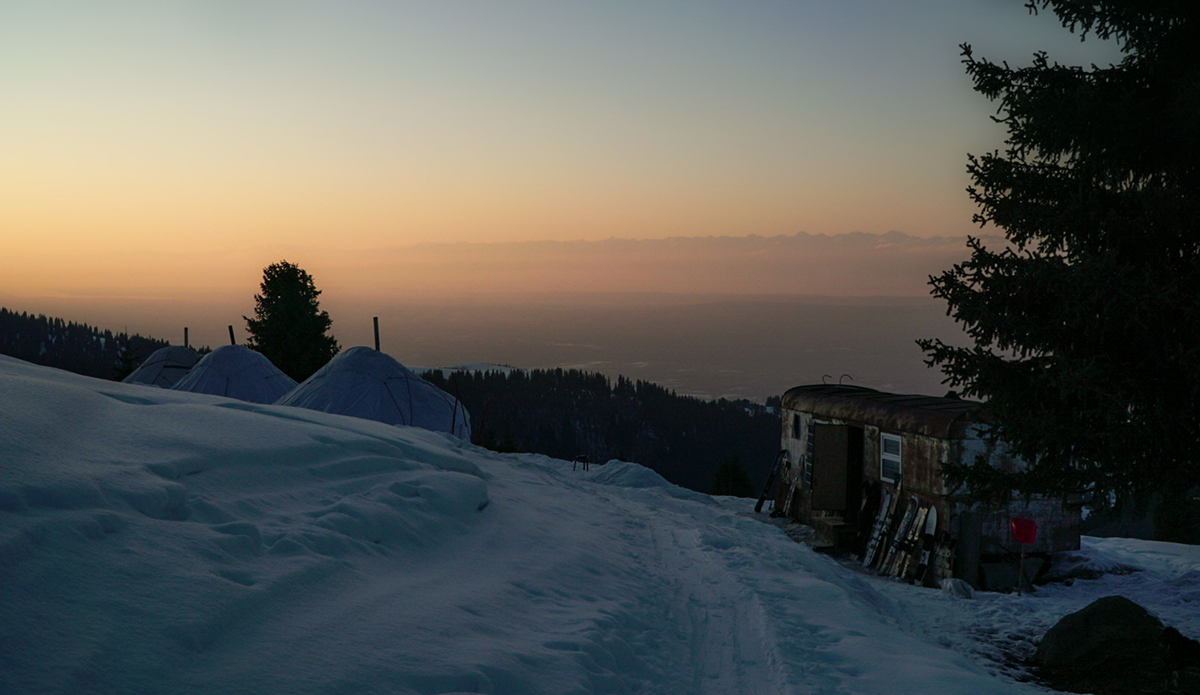 Waking up to a view. Photo: Pierce Cameron 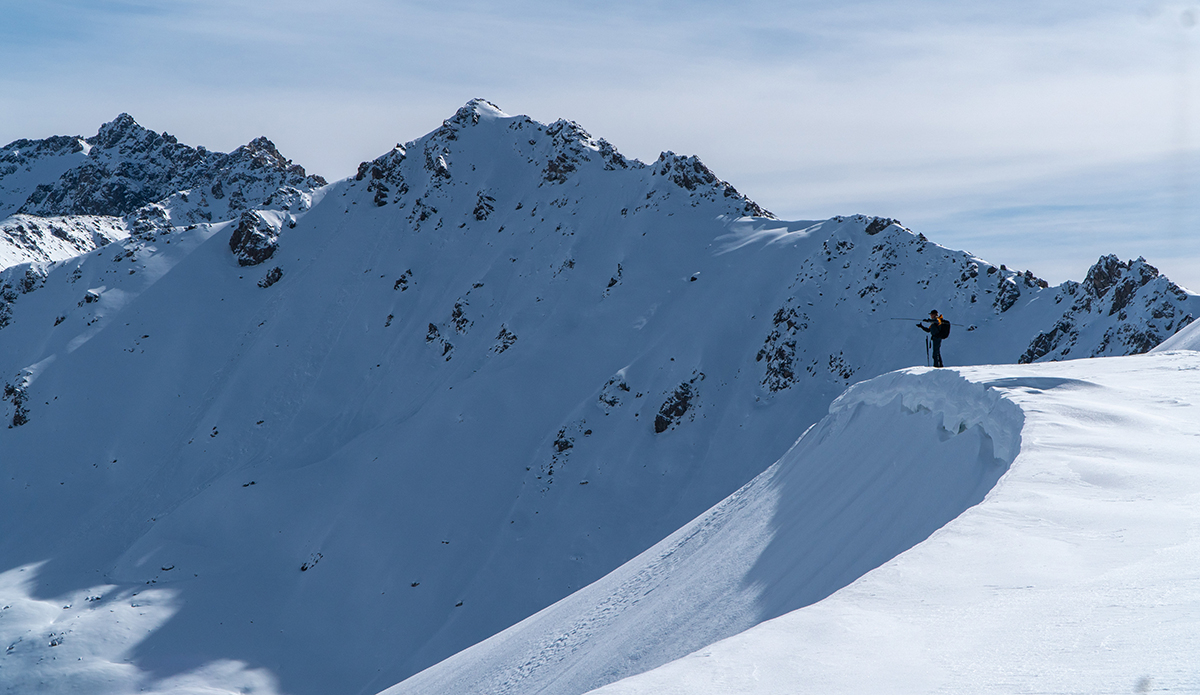 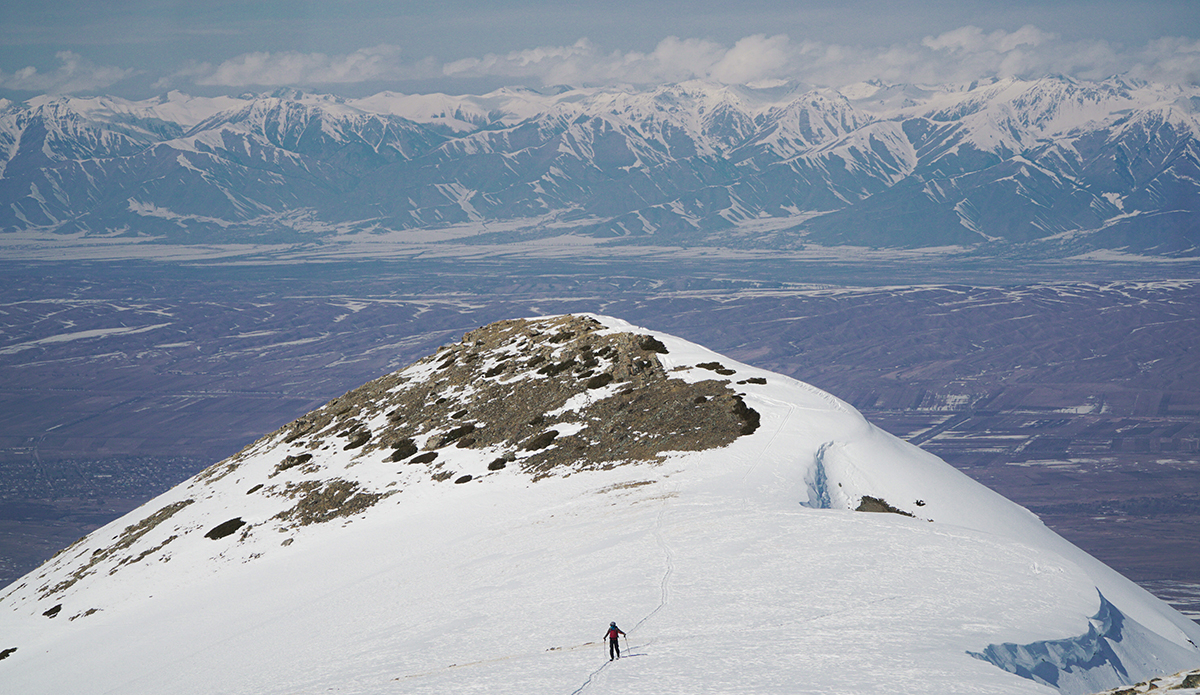 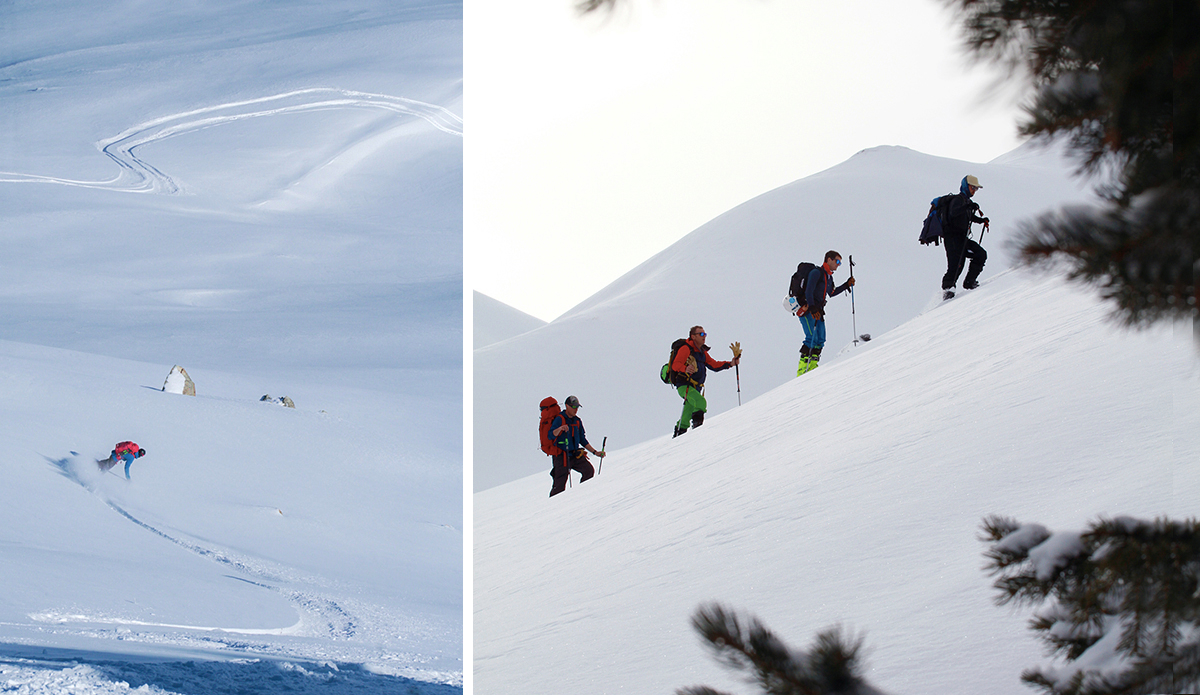 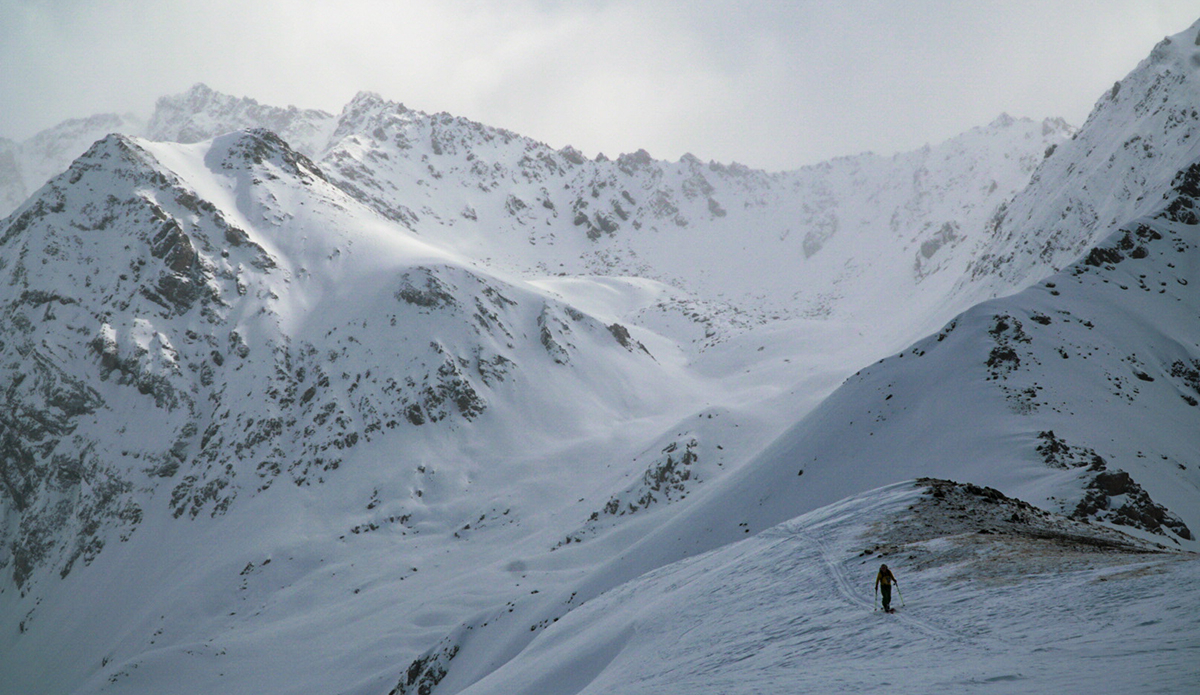 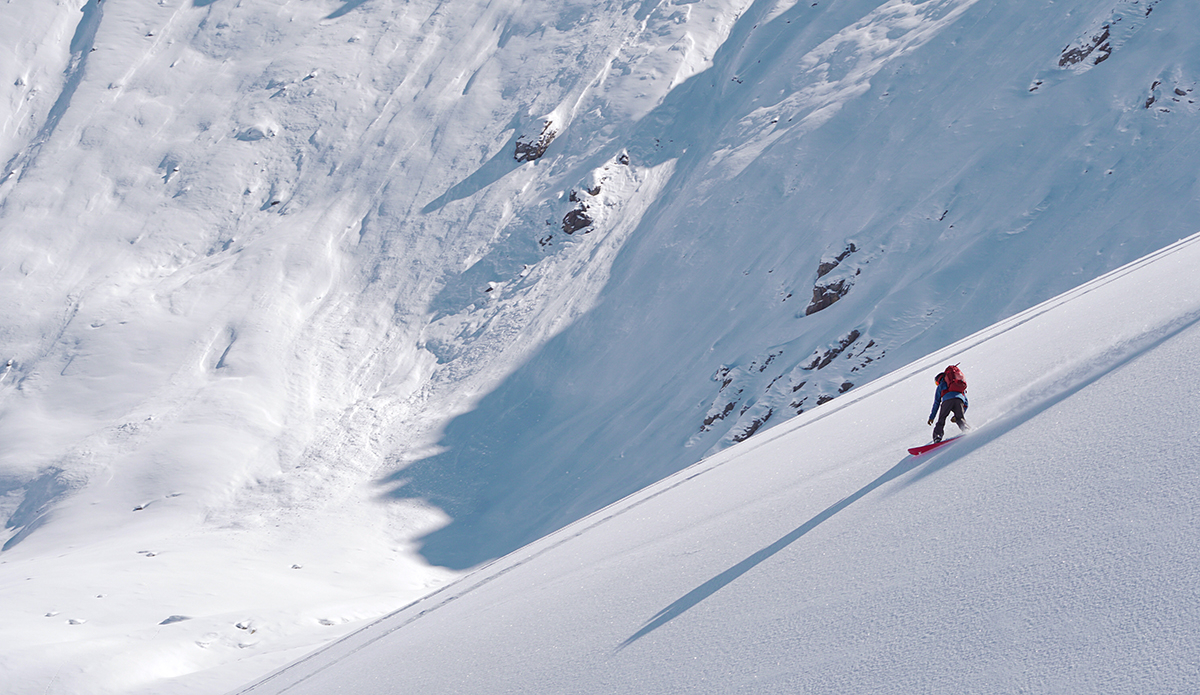 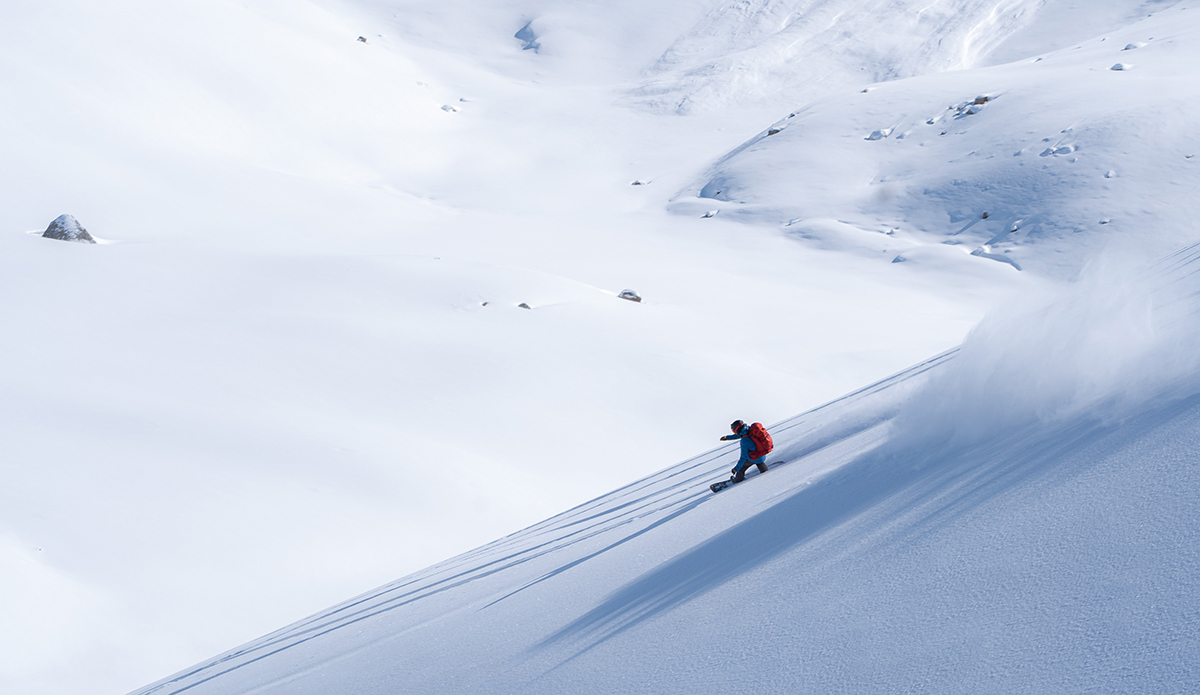 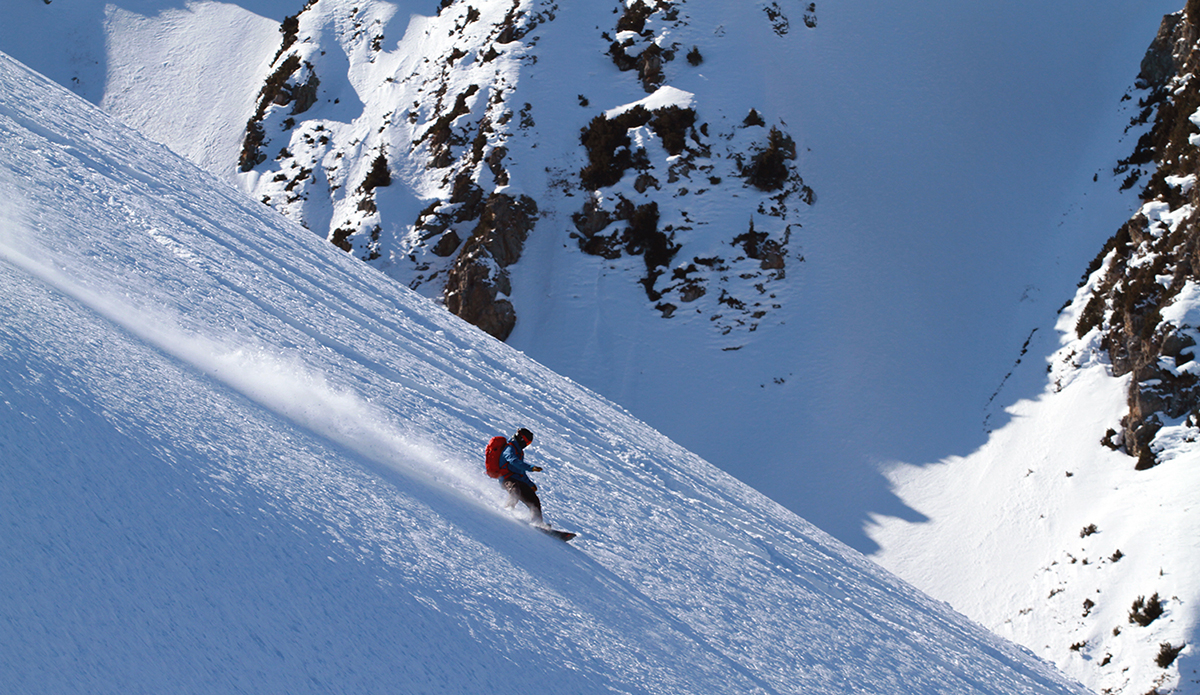 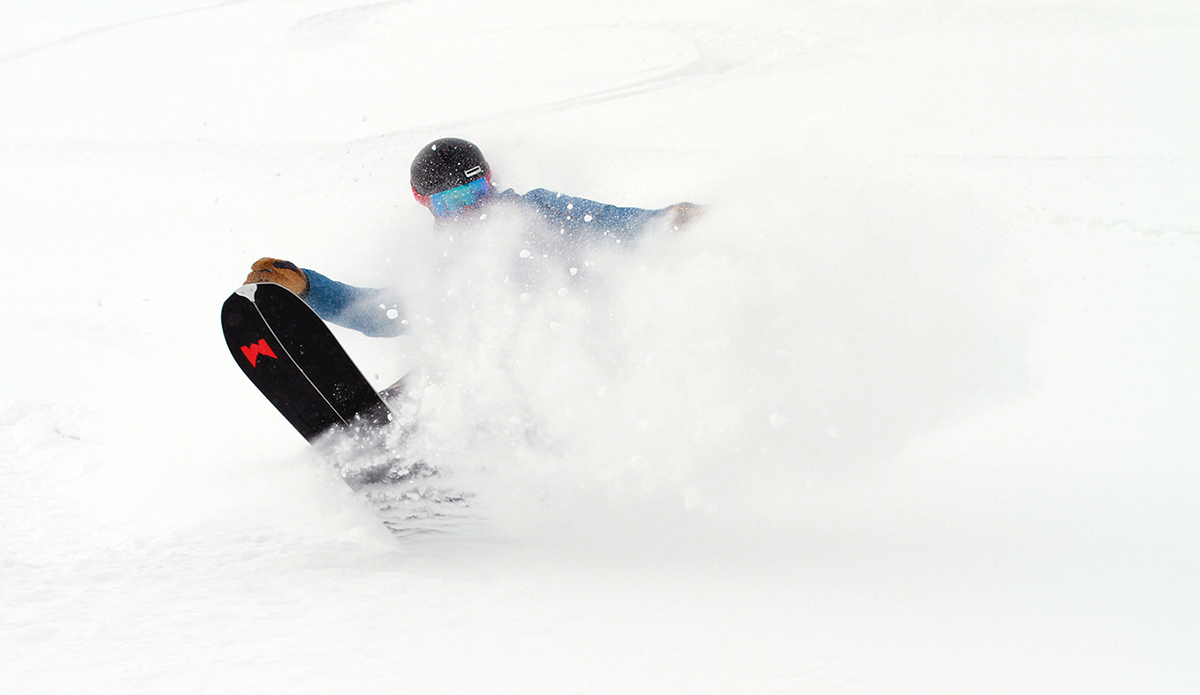 The author, getting a feel for Kyrgyzstan powder. Photo: Ryan Koupal 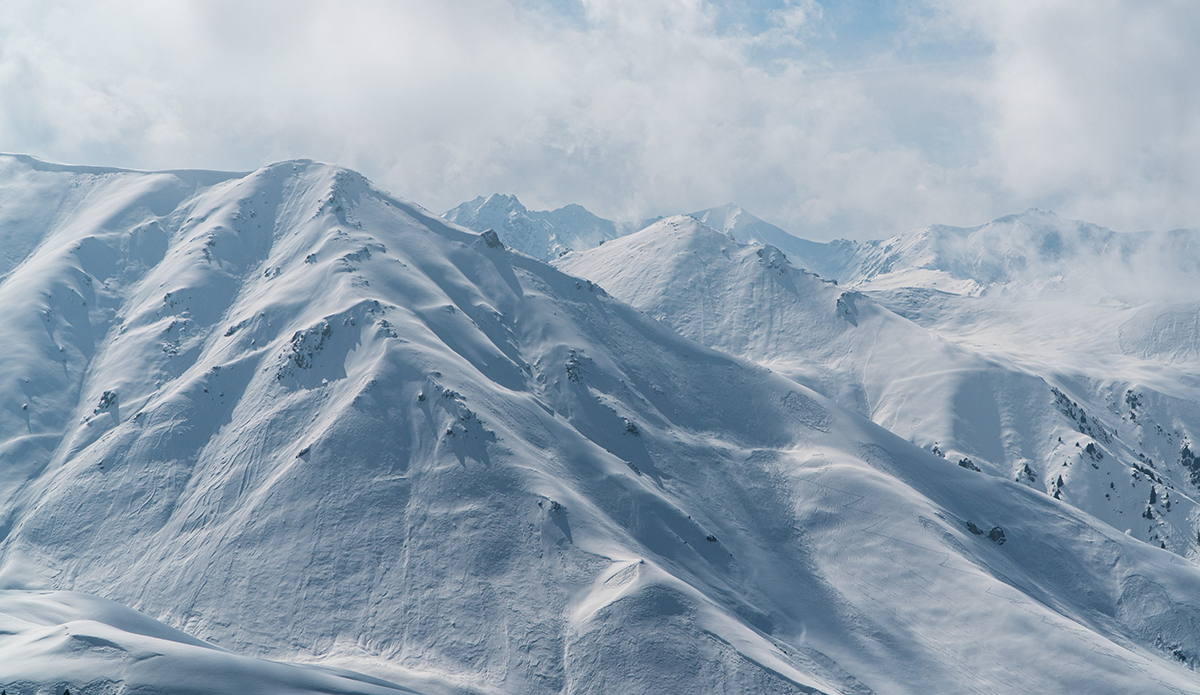 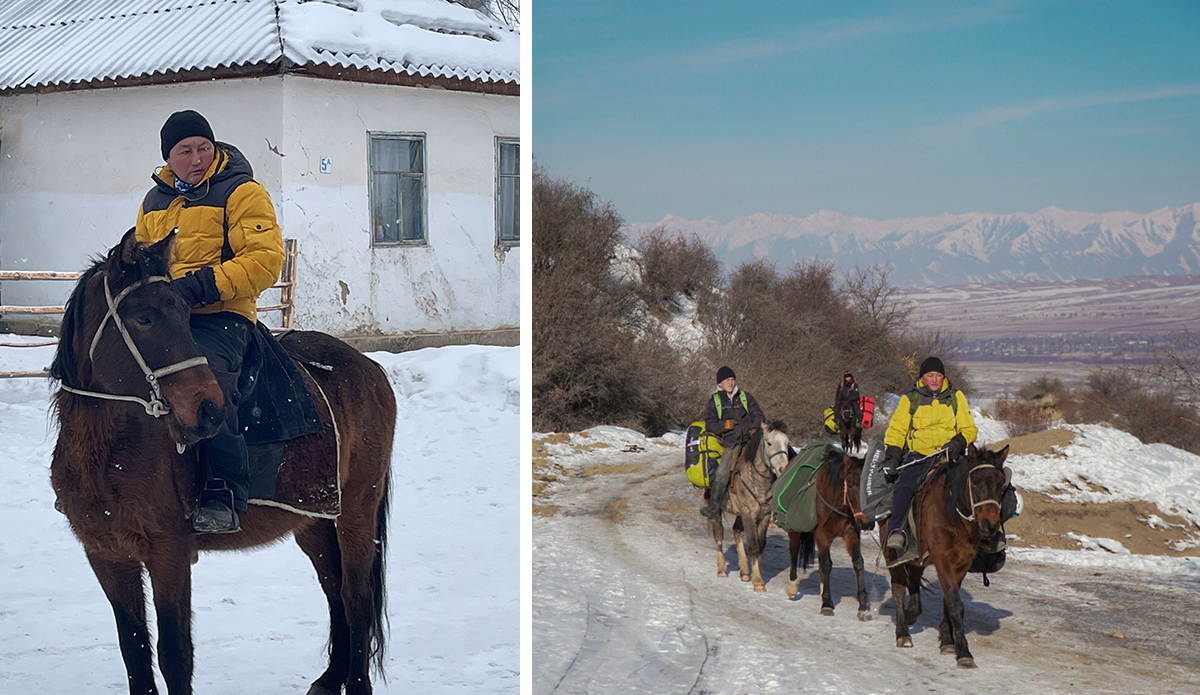 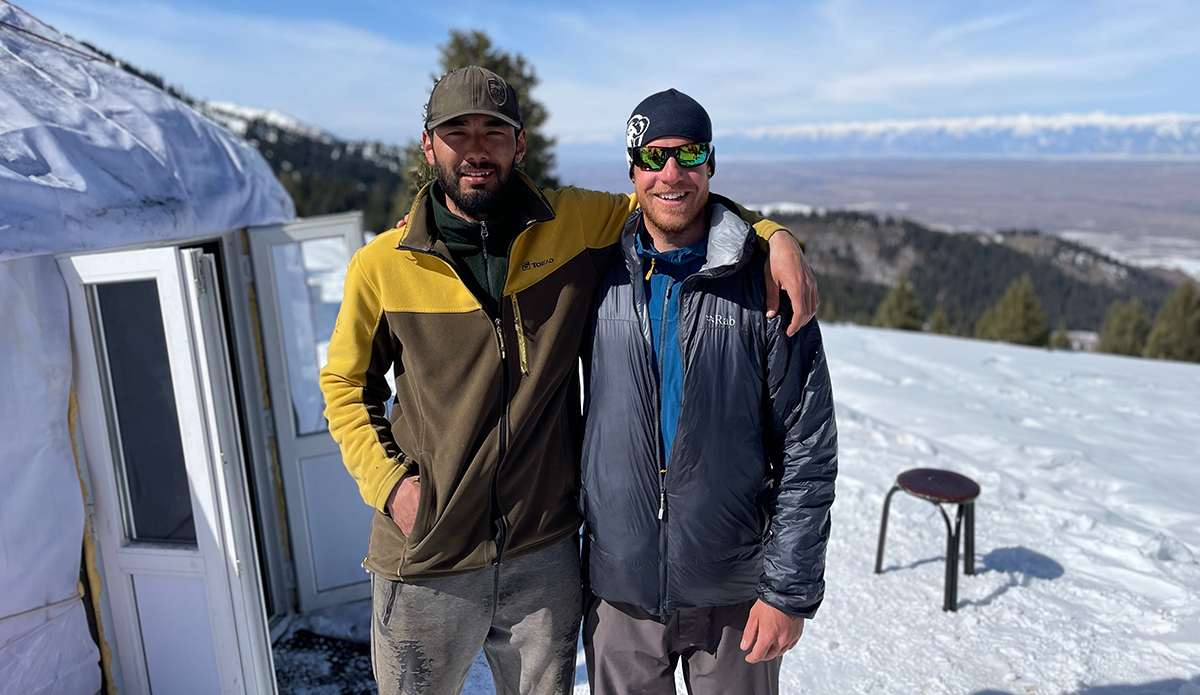 Akim, one of the hut keepers and pow surfer extraordinaire, and the author. Photo: Pierce Cameron 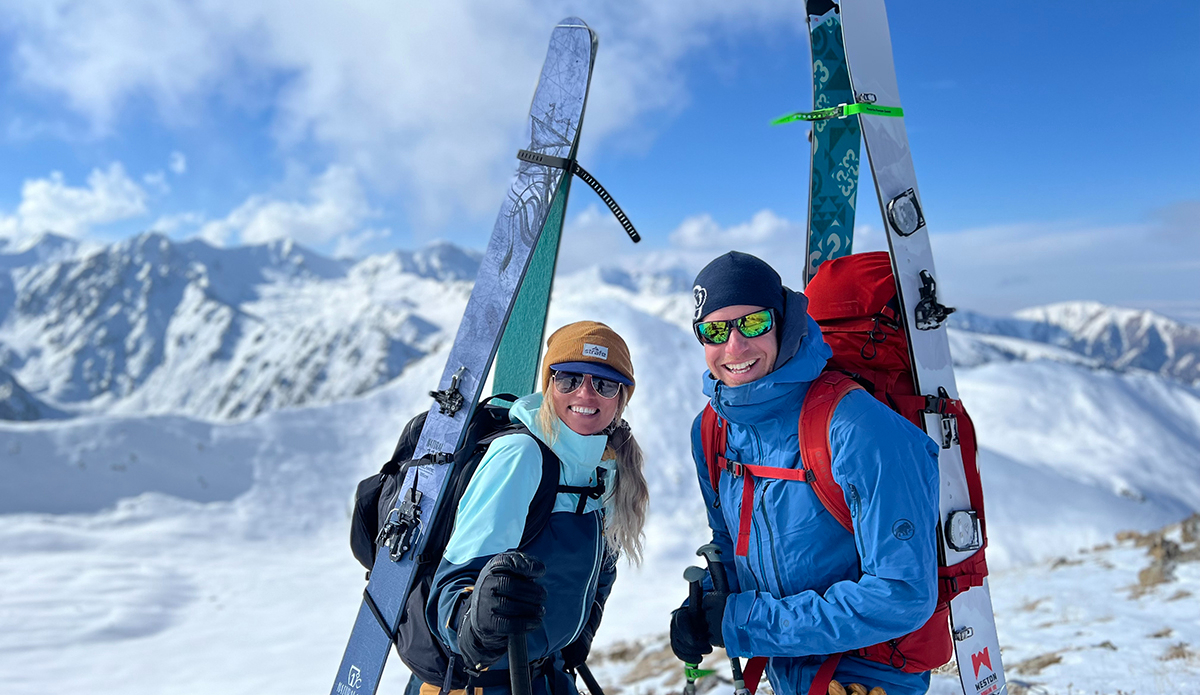 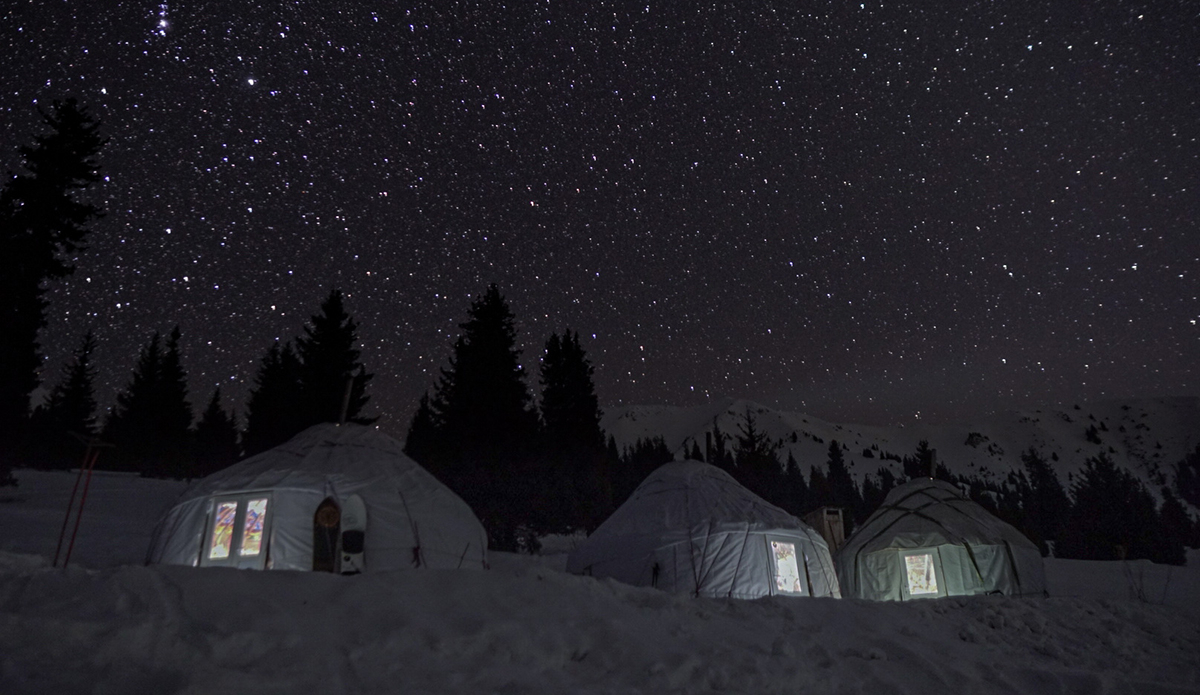 Kyrgyzstan. The name elicits different thoughts and emotions for everyone. Some immediately remember the tale of Tommy Caldwell and Beth Rodden’s harrowing travels there in 2000. Others imagine gray streets, gray cement buildings, under gray skies, while Soviet tanks roll through. Others conjure images of Genghis Khan’s hordes on horseback ravaging the Steppe. Perhaps the most common reaction is an empty thought cloud, a WTF, or a series of stutters as someone attempts to repeat the name.

The country is indeed all of these things, but so much more. As an actual country, it’s younger than I am, but has a history dating back a millennia. That history is steeped in conquest. At times in the past, it has been ruled by the Chinese, Mongols, Persians, Muslims, and Soviets. Not until 1994 did Kyrgyzstan gain independence. With such a tumultuous past comes quite the melting pot. People clearly of Mongolian or Chinese descent, others with Slavic ancestry. Mosques and Eastern Orthodox cathedrals dot the cityscapes. Cement buildings which look like World War II-era bunkers, sickle and hammer-carved above the doors. Others with giant pillars appearing more like ancient Greek or Roman citadels. Massive sculptures of Manas, the legendary and mythical ruler who united the 40 Tribes of Kyrgyzstan, along with sculptures of Buddhist monks. Cities familiar to any modern Westerner and a countryside harkening back to the days of the Wild West. A country still reeling from the collapse of communism, but learning how to move forward as a globalized democracy. One foot planted in the future and another rooted in a distant past.

My initial draw to the country was the large, remote, and infrequently ridden peaks. A combination that is invariably appealing. As a splitboarding guide, I was lucky enough to connect with 40 Tribes, an outfitter that leads trips in Kyrgyzstan, France, Greenland, Chile and other locales. I landed in the capital city Bishkek following 34 hours of travel and was met by a driver who spoke about as much English as I speak Kyrgyz, who would take me on a six-hour journey to the opposite side of the country. Portions of the drive reminded me of my home in Idaho, others made me sure I was in a far-off land. The majority of the drive traversed the shores of Lake Issyk Kuhl, the second largest alpine lake in the world, and dropped me at the foot of the Tian Shan Mountains. The following morning, I started the skin from the village up to our yurt camp at 8,000 feet to meet my fellow guide, support crew, and settle in for the coming five weeks of work.

I still find it difficult to describe the snow in the Tian Shan. One thing I can say for sure, is that it is unlike any other place I’ve been. It’s a shallow snowpack averaging about three feet per season. The majority of which comes from moisture picked up from Lake Issyk Kuhl as storms roll over and crash into the Tian Shan. It’s also cold, which sent alarm bells ringing in the heads of all of us avalanche nerds. Cold and shallow equals FACETS, the nightmare snow grain that haunts every backcountry skier and snowboarders’ dreams. The entire snowpack consists of facets and depth hoar, some as large as seven millimeters, where you can see the cupping and striation with the naked eye. The saving grace is it’s rarely windy and storm totals don’t often amount to more than 10 centimeters, meaning there usually isn’t a slab on top of all that sugar snow. Riding with speed is your friend, and the unconsolidated snow meant you could get face shots on demand, All Day Every Day. “Never not powder,” as we say.

In the first few weeks, every step was exciting. New terrain, new views, new snowpack, new coworkers, learning Kyrgyz words, living life at 8,000 feet in traditional Kyrgyz yurts and snowboarding every day. Yeah, it was a dream! There was seldom a moment when I wasn’t smiling. Getting to know fellow travelers and skiers on the skin track, endless fresh tracks and stoke by day. Amazing local cuisine, Yahtzee, and the famous Kyrgyz cognac by night. Options were plentiful for riding and it was possible to ski for weeks without ever taking the same run, let alone crossing a track. Each day was met with sunny skies and barely a breath of wind.

We really sunk our teeth into everything the zone had to offer, shredding from bell to bell every day and returning to cozy yurts as the sun sank behind the distant Kazakh skyline. It is hard to overstate how cool of an experience living in a yurt for weeks on end was, fully immersed in the mountains. There are a few places in the world where we imagine standing on top of a 1,500- or 2,000-foot run and being able to see all the way to the bottom. Alaska and the Alps immediately come to mind, but Kyrgyzstan is one of those places as well. Standing at 11,000 feet and peering into the distance at mountains towering above the one I stood on left me dreaming of future expeditions. But those thoughts were quickly replaced by a flow state as I dropped into untouched slopes of powder with giddy friends waiting below.

During week three every step got REALLY exciting! A series of storms rolled through putting down several feet of snow, setting off the largest avalanche cycle I’d ever personally witnessed. The first morning after the storms we woke to see a ridgeline spanning well over a mile that had avalanched wall-to-wall during the night. We tip-toed our way into the mountains, cringing as every step sent a shockwave of collapsing facets rippling away from our feet. We proceeded to remotely trigger avalanches for the next several days. Partially terrifying, partially amazing, wholly an eye-opening and educational experience.

Despite the dicey avalanche conditions, we were able to have a blast riding the fresh snow in low angle trees. We began to slowly step back into steeper terrain by traveling and riding slopes which had already slid. Eventually it seemed like everything had slid or we had collapsed every square inch of the place, still we remained diligent. Finally, our patience was rewarded by more days in the alpine and some beautiful ridge walks. We were even able to ride one of the most aesthetic lines above camp, known as The Shrine, which required multiple descents, traversing several alpine bowls and ridgelines to access. Indeed, we had come a long way.

A trip like this would be extremely difficult, if not impossible without the support of locals, and we were lucky to work with many. “King Nurbek,” as we refered to him, really made the magic happen. In a previous life he worked for a decade as a cook for the Soviet army, and then another ten years for the Kyrgyz. Now he is a cook at the yurt camp, local knowledge keeper, and horse packer extraordinaire. All while running his family farm which consists of horses, a handful of cattle, a herd of sheep, and an orchard. During the summer months he also works as a truck driver. Nurbek is a testament to adaptability and ingenuity. We gained so much by having his support and it’s a two-way street. Through this partnership he has been able to put an addition on his house, add indoor plumbing, and send his daughter to college in Karakol. It’s safe to say it has changed his and his family’s life and is an example of what responsible ecotourism can look like.

There are many aspects of my time in Kyrgyzstan that will stick with me. The lessons learned about snowpack and avalanches are invaluable. The opportunity to meet mountain lovers from across the world is always welcome. And certainly, the endless powder turns and face shots were worth every minute crammed on a plane. The Tian Shan or “Heavenly Mountains” weren’t named by accident. They are a powerful range creating the borders of many countries. For us, they created one amazing playground and a conduit to connect with locals and fellow world travelers. The snowboarding was amazing, but a trip to Kyrgyzstan is so much more. One thing that can’t be overstated is the kindness and generosity of the people. It’s common for locals to carry a stoic expression, but it doesn’t take much more than a smile to get a beaming grin back. Both are traits I’ve found in many poor parts of the world and a beautiful reminder of what is important in life. From a Western perspective, Kyrgyzstan may have a long way to go, but it also has plenty to teach – about snowboarding and life!