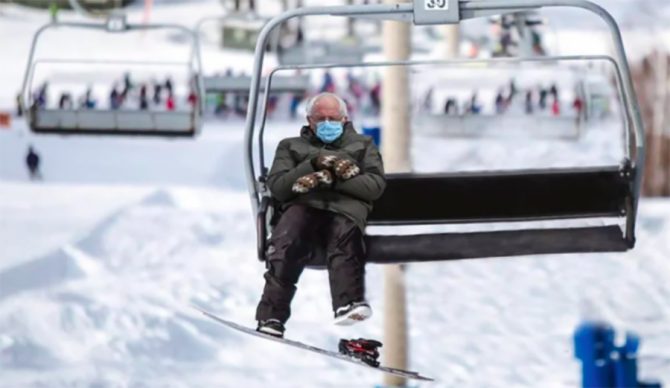 Bernie Sanders is a fashion god, it would seem. At yesterday’s Presidential Inauguration for Joe Biden, Sanders, a Vermont senator, was sporting a Burton jacket. (The company is of course headquartered in his home state.) He also wore a pair of homemade mittens, mask, and sat in a chair in his typical staid pose.

Burton was quick to point out (and cleverly, we might add) that Bernie was wearing its Edgecomb jacket (below). But he also wore a cozy pair of homemade mittens that had internet pundits wondering where they came from. As the Burton Instagram post states, and the Washington Post confirms, the warm-looking mittens were made by Vermont native Jen Ellis. As a side hustle, she makes them from repurposed wool sweaters and lines them with fleece made from recycled plastic. The teacher says she’s always admired Sanders so she sent him a pair in 2016 after he lost the presidential bid.

“I thought, ‘I’d like to make him a pair of mittens.’ And I did,” she said. “I totally remember the night I did it. I was thinking to myself, ‘Is this crazy? I don’t even know this guy.’ But I wanted to make them for him, so I did.”

Sanders obviously loves them (who doesn’t love mittens) – he wore them on the 2019 campaign trail as well – and his getup inspired an absolute meme fest online. Below are a few of the classics from the day. Enjoy the national treasure that is Bernie Sanders.