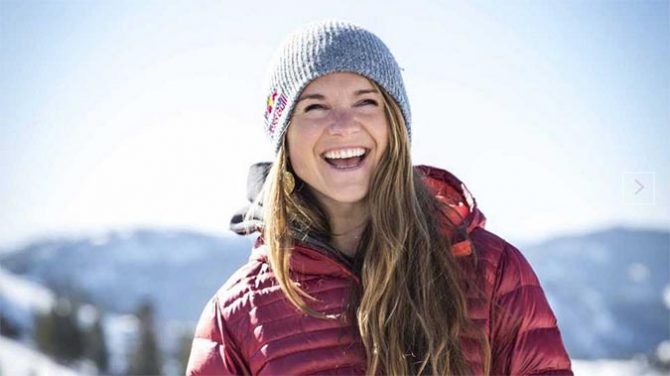 Michelle Parker has become a leader in her sport, both as a skier and producer. Photo: Squaw-Alpine

Editor’s Note: On August 17, The Inertia’s EVOLVE Summit will celebrate individuals making positive contributions to surf and outdoor culture. Michelle Parker is arguably one of the best freeskiers in the sport today. She’s become a leader in the ski industry but it’s taken time for her to find her voice. She’ll be discussing how women have broken through in male-dominated sports with Keala Kennelly in Los Angeles at EVOLVE next month. Tickets sold out quickly last year, so grab one before they’re gone. Enter LASTCALL at checkout to save $35 tickets until August 10th.

When I started filming as a skier, it was really male-dominated. Until Ingrid Backstrom came along and Sarah Burke – women that really helped to pave the way. But when I was younger, I didn’t think of it as being a man’s world. My dad had me tagging along and I always felt like an equal to any of the boys. I played baseball and he was my coach.

So, I’ve been surrounded by guys my entire career and I’ve always viewed them as brothers. But there was definitely challenges like unequal pay, and a lack of women both in the mountains filming and behind the lens. But one of the most challenging aspects for me was finding my own voice and being able to say what I felt and take on a leadership role in the sport. That took some time. And I think it applies to so many women in the outdoors as they try to find their voices in this world that’s changing.

This is an interesting time as female equality is such a hot topic. I think it’s also being forced slightly but that’s a good thing overall. I certainly stand behind the fact that it has to be the best person for the job, no matter who’s getting hired, male or female. But the pay gap is real and something women have to deal with. I’ve been filming with Elyse Saugstad, Angel Collinson and Tatum Monod the last two seasons and we’re all amazed that we’re in such high demand from sponsors who are using us more and wanting us to do more, but the gap in pay is still an issue. Contracts aren’t necessarily public but we know women are getting paid less because of our connections in the industry.

I’ve always wanted to stand up for equal rights and equal pay, but how do you do that without pointing fingers and blaming men who’ve worked hard, too? I think I really started finding a voice when I was able to land my own web series with Red Bull and I’m so thankful for that. I had to step into a place where I needed to be the leader, I had to find my voice, and have the confidence to say, ‘this is what I think.’ Whether that’s, booking trips at the right time, making important choices in the mountains regarding snow conditions or line choices or just the business aspect. It took me more than a year to really work on that as a producer. It opened up my personal experience and I was like, ‘wow I’m a leader,’ and I’ve never been in that situation. Now it’s the second year and holy shit, I learned so much.

Editor’s Note: Special thanks to our partners OluKai, 4ocean, Zola, Caliva, Klean Kanteen, Pau Maui Vodka, Qalo, Kindhumans, Rise Brewing Co., All Good Products, and 805 Beer for making this monumental gathering possible. Thank you also to STOKE for enabling us to host this event as sustainably as we possibly can. Enter code LASTCALL to save $35 on tickets until midnight PT on 8.10!