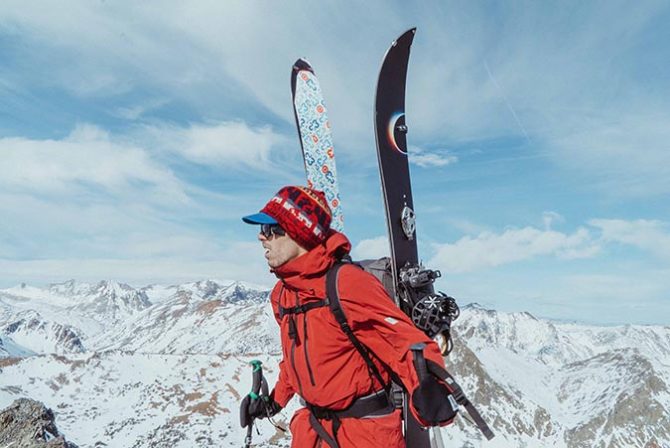 Gray Thompson’s vision as a shaper, filmmaker and rider has made the sport better. Photo: Eric Messier

Have you ever heard the term riding the white wave? It’s a way to link the process of snowboarding to surfing. But snowboarding is not surfing. Sure, they may have some commonalities, but Gray Thompson can’t stand the comparison. “I have a big problem with people viewing snowboarding as surfing or skateboarding,” says the California native. “To me, snowboarding is its own entity, we have these mountains, and this is our tool to be in this special environment.” The 27-year-old who has built a career in the industry has also paved his own path specifically dodging all traditional routes to the summit. From dishwasher to film producer to pro snowboarder to board shaper to mountaineer, he hasn’t been bashful about taking risks, and testing the boundaries of the industry on his own terms. “Keep the ball rolling and the doors open,” he says.

That gambling, hard work, and luck led to his partnership with friend, Eric Messier, spurring them to start Warp Wave, a creative collaboration that produced artsy, hi-fi style films that put snowboarding into experimental mode with the sounds, the shots, and the layout which is showcased in their dreamy film, Aurora Boardealis. More recently he has collaborated with friend, Max Hammer to start House Plant Creative, which Thompson says isn’t a “run of the mill production company,” focusing on storytelling, outdoor culture and sustainability. They produced The Range of Mystery, a film where a small group of splitboarders search for a mystic mountain range in Bolivia. In the near future the film Ducky Goes Up will be released, documenting Andrew Harris’ 2017 climb up the Grand Teton, helping to raise awareness in the Down Syndrome community. “The project with Bob has a powerful message behind it – being active and healthy, despite challenges,” says Thompson, who has embraced the idea of branching out to take on new projects that aren’t about snowboarding.

Thompson embodies a tenacious capacity of adapting and reinventing in an industry that hasn’t always had a clear path. One could call him a visionary, a renegade or just a solid person that felt a dedication to give back to the snowboard community in his own way. “I almost feel obligated to bring something to the table with snowboarding because it has given me so much,” he says. “I feel the need to give back to the greater culture in any way I can.” 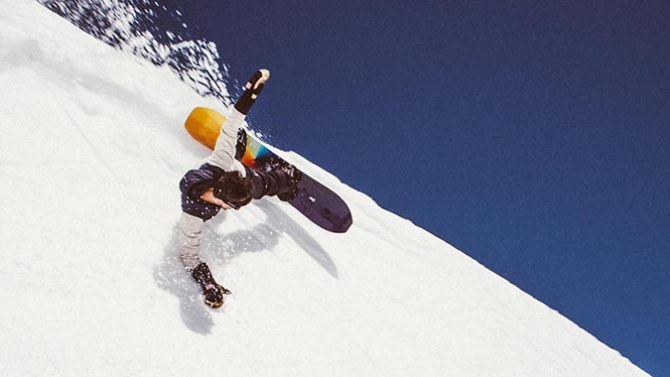 A classic shot, proving Thompson is just as good in front of the camera as he is behind it. Photo: Kyle Schwartz

How did you find yourself in the mountains?

I first came up to Tahoe when I was five or something. Growing up in San Francisco, Northern California, in general, was this kind of recreationalist zone. I tried skiing once at Diamond Peak and I didn’t really connect with it. My parents were outdoorsy, but they weren’t really mountain or winter people. We would camp and backpack, but they weren’t die-hard skiers. Between five and six I came across a snowboarding book and at the time I was really into skateboarding. The mountains were such a contrast to the concrete jungle, there was this freedom and no boundaries–this was 1997 and the industry was charging.

How did you end up in Tahoe?

Well, I was a weekend warrior up until high school and then I had the opportunity to move up here with my dad and go to high school. I wasn’t doing well in the city. I came up, barely finished high school–I don’t know how they gave me a diploma–but they did. Right after high school I was still super into snowboarding and I couldn’t just bail to college, so I moved into a flop house with like 10 other people. I was working at a sushi restaurant as a busser and a dishwasher, a pizza restaurant and doing family portrait photography as an assistant–lugging gear around and setting up flashes.

Is that how you got started with filming and photography?

Actually, that started in high school with a film/photography class. It was super fun and hands-on. I was up in the mountains every weekend and I had to take photos. Snowboarding is what I was doing so I just started shooting snowboarding more and more. I thought to myself, ‘this is a way I could sustain this passion.’ I was fired up and all of my friends were trying to be pros. I just went for it and shot photos. It was the next generation of Tahoe snowboarders: we partied and worked shitty jobs.

How did this evolve into making boards, films, and producing stuff?

For me, at this point, everything was just having fun and it lead into something totally different that I never really imagined would happen. It was never really a goal of mine to be a professional snowboarder, but snowboarding has always been the biggest part of my life and I dedicated a lot to it. I was just planning on shooting photos and it was through shooting photos that I met the Commune Crew–a local group of semi-pro riders. It was the big year of 2010 and when we connected and they saw me ride and were like, “you should be in our films.” I had never really filmed any segments and the next thing I know I’m going to all these spots, riding so much powder, and doing all these things I didn’t even know I could do. I was riding and shooting while still washing dishes to pay the bills.

Thompson humbly admits that snowboarding has given him everything. Photo: Steven Kimura

Is this how your Warp Wave Production started?

I got super tight with Eric Messier and we had the same vision and saw snowboarding a little differently than the industry. Essentially, we started Warp Wave at a coffee shop in Truckee during the summer which ultimately sparked our first project – REM cycle, which began this creative cycle of experimenting with all these different types of cameras with weird electronics and weird effects. We shot for the moon and got shot down by all the industry folks…. nobody was interested in our content. But we were documenting riding how we rode–fast, loose, slashing, hot-boying around. It was fun.

How did you get into shaping snowboards?

Warp Wave started taking off and we were actually able to pay for a website and some editing gear. We weren’t really making money, but we were doing it. I started riding for K2 and after a couple of years we were planning on doing a collab board, I had this idea of a board and then it fell through the cracks. At the time Eric and I were riding for this company, Owner Operator, that made classic retro vibe outerwear so when the K2 board fell through I was on the phone with one of the owners, Steve, and he was like why don’t we start our own snowboard company? All of sudden it was like this new art project and until that moment I had sort of been taking these random big leaps, never really taking any traditional path so I was like, ‘yeah let’s do it.’ Within a month we had a brand name, United Shapes, and a factory where we could make samples. We still didn’t have any money and I was still working odd jobs. Our first 20 boards were all messed up, but we had a product, a story, and we were contributing to the culture. Five years later we have this huge line of boards that are internationally distributed. I guess the point is you don’t know if you don’t try.

You do so many varied projects? What influences that?

For me, it all stems back to the feeling of being out of place in the city, this thought of not belonging there and then finally finding out where you do belong, which for me was the mountains. I finally felt like I was in the right spot and it gave me so much motivation and drive. It was like this idea of sharing where you truly want to be and this expression of leaving what doesn’t work for something that does work. Adding to this I grew up in a very creative environment and eventually incorporating the mountains almost made for this new test piece like how I can apply creativity to this texture or this aspect. I love learning and each project is like a learning project. I want to do it all, wear lots of hats, and be a jack of all trades, master of none. This was all a snowball effect from Warp Wave introducing me to filmmaking and this idea of storytelling and playing with viewers’ emotions in how they see and think about stuff. The Range of Mystery film for me was one of the first times I was able to tap into that storytelling aspect.

How much has travel played a role with your projects?

The past year was India, Europe, and Bolivia, if anything travel has almost drawn me further from snowboarding because all of a sudden you are seeing life through a different lens and you realize that everybody is just trying to live life and be happy; it’s as if there is this journey with all these awesome learning opportunities. Traveling has definitely opened my mind up to that and it’s made me want to give more back and to be grateful. 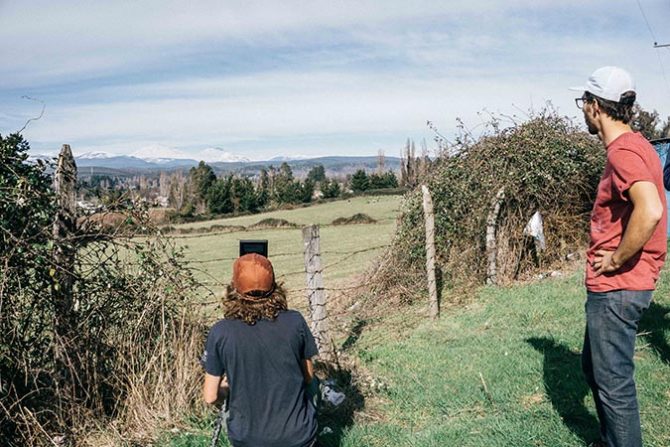 It also has seemed to change the adventure and different aspects of snowboarding for you as well?

I’ve been backcountry splitboarding since 2012-2013. I’ve always been sort of a freerider, so backcountry and big mountain has been the top tier for me. It was as if the Range of Mystery was like the next chapter as far as getting into high altitude and remote travel. People are creatures of comfort, so it has sort of been hard to find adventurers to delve into this style of getting out there. Personally, I’m trying to push this idea of climbing and snowboarding, getting into more technical lines. The down is great but I’m really starting to love the up–it’s special and if you start to look at it differently. It can really be a cool thing. It gets your mind going. Not only are you having to find the line up, but your line down as well. For me, it’s the next evolution.

What about the future of snowboarding?

I think it’s still pretty delicate. I’m concerned that there are not enough people with an authentic vibe that are going to push things in the right direction for the right reasons. You have to be careful not to step on toes in the industry and there are a lot of recycled ideas which can make things kind of stale. I think as long as people are bringing authenticity to the industry then it will continue to change.