Hilaree Nelson Has Perished on Manaslu After Fall During Ski Descent 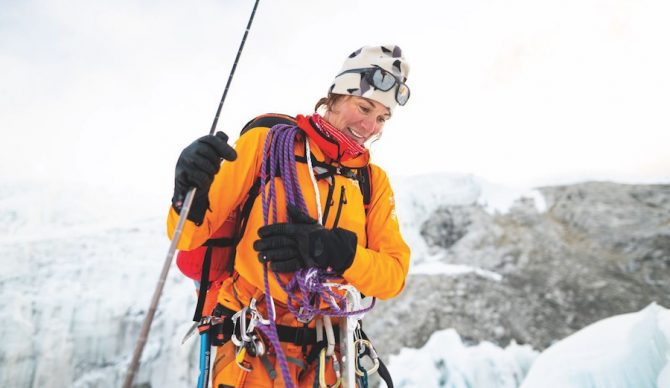 In news no one in the greater alpine community wanted to hear, Jim Morrison today posted to his Instagram account that he and a pilot had flown into a location on Manaslu in the Nepalese Himalayas where he and Hilaree Nelson had summited the mountain Monday before Nelson took a fall. He confirmed that they have recovered her body.

“There are no words to describe the love for this woman, my life partner, my lover, my best friend, and my mountain partner. She has been the beacon of light in my life day in and day out,” Morrison wrote.
On September 26th at 10:42 am we reached the true summit of Manaslu in tough conditions. We quickly transitioned from climbing to skiing in cold and wind with a plan to ski around the corner and regroup with our Sherpa team. I skied first and after a few turns Hilaree followed and started a small avalanche. She was swept off her feet and carried down a narrow snow slope down the south side (opposite from climbing route) of the mountain over 5,000 feet. I did everything I could to locate her but was unable to go down the face as I hoped to find her alive and live my life with her.
I spent the last two days searching from the air in a helicopter.
Today with the help of @capt_surendra an incredibly skilled pilot we were able to land at 22,000 feet and search for her. @nimsdai was instrumental in helping organize the best team and resources possible and I found her body with the aid of @mt.sherpa today at 10:30 am. I’m in Kathmandu with her and her spirit.
My loss is indescribable and I am focused on her children and their steps forward. @hilareenelson is the most inspiring person in life and now her energy will guide our collective souls.
🙏 Peace be with us all. Pray for her family and community which is broadly stretched across our planet.
I’m devastated by the loss of her.”

It was truly a devastating end to a tragic week as the mountain community held out hope that Nelson would be found alive somehow. One of the all-time great ski mountaineers, Nelson leaves behind an incredible legacy. In 2018, Nelson and Morrison became the first to ski the 27,940-foot Lhotse, adjacent to Mt. Everest. It was a monumental effort and descent that earned her a National Geographic Adventurer of the Year award. In 2012, she summited two 8,000 meter peaks in a 24-hour period, setting a standard for mountaineers of any gender. Her mountaineering descents took her all over the world and she truly became a beacon for women in the alpine world.

“We lost a legendary mountain athlete this week on Manaslu,” wrote fellow ski mountaineer Caroline Gleich. “Hilaree was one of the greatest ski mountaineers of our time. My heart is broken after hearing the news. As an athlete and activist, I always felt like I was following in her footsteps. Hilaree, you were an inspiration to us all. To people of all ages and genders, but especially to women and mothers.”

Indeed, Nelson wrote about the subject of women valuing themselves in alpine sports more for The Inertia in 2018. “I look back now and know that a big part of my struggles early on were that I was willing to acquiesce; it was me undervaluing myself,” she wrote. “As a North Face team captain now, I have female athletes asking me, ‘Am I not doing this right? Should I be doing this?’ Knowing the individuals, it’s such bullshit. ‘Come in hard,’ I tell them. ‘Do what you do, and go for it.’ That is a problem I’d like to see us change. Women need to stop underselling themselves. Stop acquiescing and know that if you’re out there, pushing the limits, then you’re worth it.

Nelson leaves behind two young sons, Quinn and Grayden. Our thoughts are with Nelson’s family and friends during this difficult time.