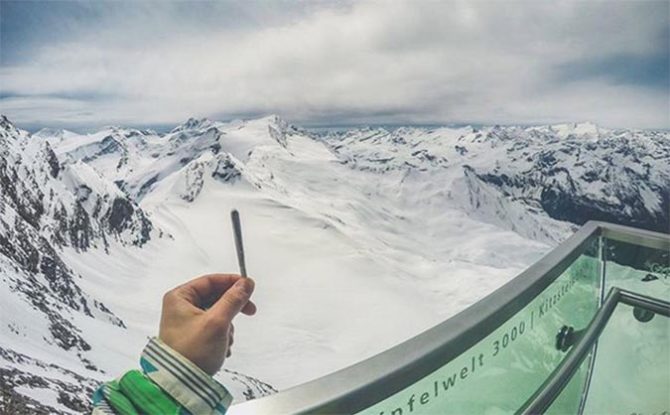 Can marijuana make athletes go bigger on skis or snowboard? Probably not. But it can help in recovery.     Photo: Weedmaps

Twenty years ago this week, when Ross Rebagliati won the first-ever Olympic gold medal in snowboarding and promptly tested positive for marijuana, sports fans around the world had just one question: How can weed be performance-enhancing?

Robin Williams summed up the general reaction. “The only way it’s performance enhancing is if there’s a big fucking Hershey bar at the end of the run.”

The positive test was no joke for Rebagliati. He was temporarily stripped of his giant slalom gold medal and spent a night in a Japanese jail.

Rebagliati got his medal back on appeal because nobody at the International Olympic Committee had gotten around to adding marijuana to the list of performance-enhancing drugs. That’s a pretty ironic oversight for a bureaucrat organization trying to shame an athlete for being a stoner.

The IOC quietly returned his medal, and immediately added marijuana to the “Prohibited List.” The World Anti-Doping Agency considers it a performance-enhancing drug, but let’s not kid anyone. Marijuana is banned from Olympic sports because it doesn’t fit the clean-cut image the self-styled “Olympic movement” cultivates. As the U.S. Anti-Doping Agency states in its marijuana FAQ, “Due to the illegal nature of marijuana in most countries, the use or abuse of marijuana does not exhibit the ethics and moral judgment that upholds the spirit of sport.”

But weed is not illegal everywhere. Even as the Jeff Sessions Justice Department doubles down on ‘Reefer Madness’ rhetoric, nine states and Washington, D.C., have legalized marijuana for recreational use, and medical cannabis is legal in a further 29 states. Starting in July, recreational marijuana will be legal throughout Canada. The rules are also relaxing for Olympians and athletes in other sports.

In 2013 the World Anti-Doping Agency (WADA) changed its policy from prohibiting any marijuana use by athletes to banning it only during competition. Because testing doesn’t show when an athlete last used marijuana, WADA increased the threshold for a positive test by 1,000 percent, from 15 nanograms of THC per milliliter to 150 ng/ml. Testing for weed is an inexact science, but as weed advocate Allen St. Pierre told USA Today, you’d have to be a “pretty dedicated cannabis consumer” to hit the new threshold. Rebagliati’s positive, which he has always maintained was caused by secondhand smoke, was 17.8 ng/ml.

Even more significantly, WADA removed cannabidiol from the Prohibited List. Commonly called CBD, cannabidiol is a non-psychoactive component of marijuana believed to have powerful anti-inflammatory properties. That could be a game-changer for athletes and where weed’s performance enhancing properties lie.

As the rules and social stigma have relaxed, athletes are becoming more open to using cannabis. Take UFC fighter Nate Diaz, who repeatedly hit a vape pen loaded with CBD during a press conference in 2016. “It helps with the healing process and inflammation, stuff like that,” Diaz told a room full of reporters after going the distance with Conor McGregor. “It’ll make your life a better place.”

The stunt earned Diaz a stern public warning from USADA, which he quickly put in perspective. “It don’t matter. I banked out in the cannabis industry from it.” 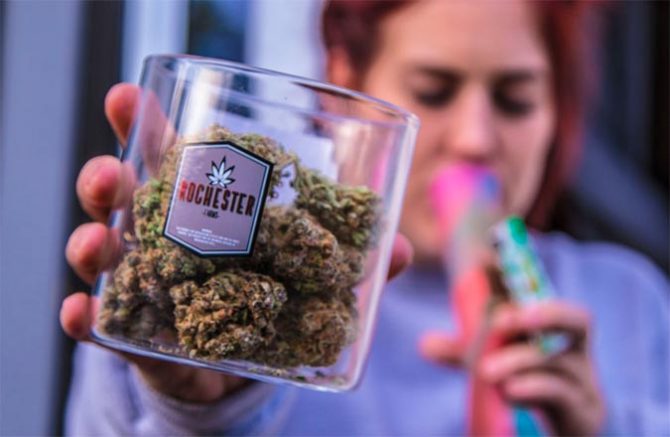 A host of prominent athletes have been outed as marijuana users, including swimmer Michael Phelps, who served a three-month competition ban after photos surfaced of him ripping a bong in 2008, and scores of NFL players including the eponymously named Eagles running back LeGarrette Blount.

Phelps is the most-decorated Olympian in history with 23 gold medals, and Blount just won his third Super Bowl. Maybe weed is performance enhancing after all.

Rebagliati sure thinks so. Though he says he didn’t smoke in the 10 months before Nagano—he’s never wavered from the Spicoli’s van defense—Rebagliati was a regular cannabis user until snowboarding was added to the Olympic program. He now runs a cannabis brand in Whistler, B.C. called Ross’ Gold.

“I was known as the guy on tour that loved smoking weed,” Rebagliati told me in an interview Tuesday.

That changed in 1997 when the IOC recognized the International Ski Federation (FIS) as the governing body for Olympic snowboarding. The power-play sidelined the International Snowboarding Federation, prompting three-time halfpipe world champion Terje Haakonsen to boycott the Olympics in protest. It also made dope illegal on the world cup tour, since the FIS had a standing ban with a 15 mg/ml threshold. Rebagliati didn’t like it, but he quit weed long enough to win the gold medal.

He says he never competed stoned, but he burned down more than a few joints in training and credits the enhanced awareness for dialing in his gear. “I found that I was able to use cannabis to get more in tune with my equipment, the snow conditions, how my wax was running,” he says. “All the little things like the color of the grass, or how sunny it is or how fucking nice it is outside—those are the things you notice when you’re using cannabis.”

Other athletes say marijuana can help with mental focus and soothe competition anxiety. There’s not much scientific research on the subject, because marijuana is still a Schedule 1 controlled substance under U.S. federal law, making it tough to get the research-grade dank good science demands.

Writer Gordy Megroz ran his own investigation for Outside magazine back in 2015, using himself as a guinea pig to test the effect of cannabis in a variety of workouts and outdoor sports. On skis, he wrote that he “felt invincible and proceeded to attack the steepest lines without fear.” On the mountain bike he reports feeling “flowy and fast,” but then misjudged a turn and rode straight off the trail.

Like any other drug, legal or otherwise, marijuana has negative and beneficial effects. But the best argument for athletes to use cannabis may be that the side effects are less harmful than alternatives such as anti-inflammatory drugs, which can be hard on the stomach, liver, and kidneys, and highly addictive opioid painkillers.

“The truth is that NFL players have been proving the viability of cannabis as a pain medicine for decades,” former pro Nate Jackson writes in an L.A. Times editorial. Using his own experience as an example, he makes a compelling argument for marijuana in place of the highly addictive opioid pain pills that are ubiquitous in the league.

Nothing can stop me, I’m all the way 🆙 #WinterOlympics

“By the time I tore my groin off the bone, in 2007, I was medicating only with cannabis,” the former Bronco’s tight end writes. “The team doctors cheered the speed at which I was healing, but I couldn’t disclose to them all that I was experiencing — no pain, no inflammation, restful sleep, vigorous appetite, a clear head.”

Cannabis doesn’t have the flat-out performance benefits you think of when you hear the term “Performance Enhancing Drugs.” It won’t make you jump out of the blocks like disgraced sprinter Ben Johnson on steroids. It won’t get you to the top of Alpe d’Huez like Lance Armstrong on EPO. It won’t even give you the boost athletes routinely get from bogus prescriptions for asthma, attention-deficit and thyroid medicines allowed under WADA’s gargantuan therapeutic use loophole. The Norwegian Nordic ski team brought 6,000 doses of asthma medication to PyeongChang. Who would have thought a pack of asthmatics would rack up so many gold medals in the world’s toughest aerobic sport?

What cannabis can do, Rebagliati says, is help with recovery and pain management.