This morning, with my snowboard tucked comfortably under my arm, I did two separate hikes off the storied Jackson Hole Mountain Resort. When I strapped in and began sliding downhill, the light, dry snow flew over my shoulders and filled my mouth, taking my breath away on several turns. It was one of my best powder days of the year. It wasn’t one of Jackson Hole’s best powder days. Not by a longshot. Because Jackson Hole gets plenty of good powder days. But for anyone that gets the opportunity to ride 10 fresh inches at JHMR, the steeps combined with the snow quality usually make it one for the books. Because us regular schmucks don’t get to ride places like this every day.

I’m here for one of the coolest contests of the year at JHMR, the Kings and Queens of Corbet’s. Jackson Hole has been on a heater when it comes to hosting great events lately, having just hosted the Natural Selection Tour. King’s and Queen’s brings similar action for its fourth year but focuses on the iconic Corbet’s Couloir, one of the most famous lines in North America, where 27 skiers and snowboarders throw themselves off the top of the couloir into the line, then get to choose their own adventure using several man-made jumps within the chute. It’s one helluva good watch. But there’s some changes this year. Here’s a rundown of what to expect. 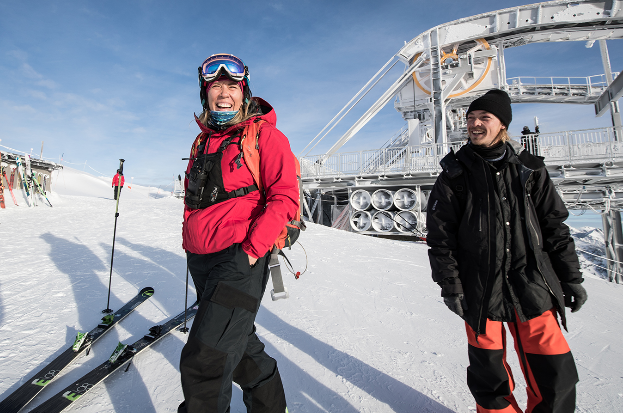 Jess McMillan (left) who runs events and partnerships at Jackson Hole (and the Kings and Queens event), is at the center of keeping athletes and staff safe. Photo: Amy Jimmerson/JHMR

As with every athletic event on Earth in the last year, Kings and Queens has been impacted by COVID-19. Protocols are in place at the resort (like only 25 people per Aerial Tram, mask requirements, etc.) which is trickling down to the contest. Each athlete, camera person, safety expert, and yes, media member, has been tested for COVID with a swab of the mouth and organizers are doing everything they can to limit risk to athletes, support staff, and the community of Jackson Hole, while still hosting a fantastic event. “Kings & Queens popularity will be met with a more scaled, manageable and intimate experience with adherence to strict policies and procedures aligned with COVID-19 protocols,” JHMR officials wrote in a release. Which means they’re keeping things tight. 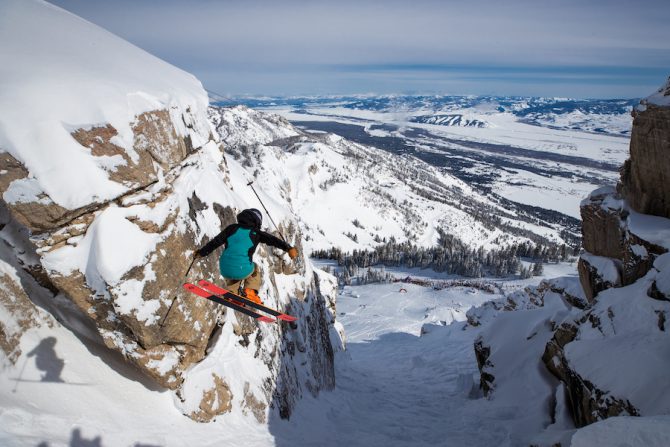 With all the COVID protocols, JHMR decided to air the entire, finished broadcast on Monday, February 22 on Red Bull TV and at JacksonHole.com at 1 p.m. MST. You can expect the production value to be the business, as it always is. Jackson Hole does a great job with its social media, too, so there will be up-to-minute updates all day on Instagram and Facebook (@JacksonHole). You can also find updates on The Inertia’s Instagram and look for a recap right damn here people. I’ll have plenty of imagery for you to oogle over. Fans will be able to watch live if you’re in Jackson from Tensleep Bowl but remember your COVID safety gear like masks and keep the distance rule in mind.

This is seriously the best part. Jackson Hole has one of the best brand names in the resort game – and some of the best terrain – so it isn’t hard to attract the best athletes. On the snowboard side, there’s some crossover from Natural Selection with Hana Beaman (one of my favs) and Elias Elhardt competing again at Corbet’s. While Nils Mindnich competed in NS, brother Hans will join the Kings and Queens lineup. I’m really looking forward to watching Red Bull athlete Yuki Kadona try his hand at Corbet’s as he crosses over from the slopestyle side of things and is obviously one of Japan’s best talents. Fairly packed lineup on the snow side.

From the skiing perspective there’s a lot of talent, too. Veronica Paulsen, who last year became the first woman to chuck a backflip into Corbet’s, is back to defend her title. I always like to keep an eye on Karl Fostvedt (aka Crazy Karl) – his lines are super creative and you never know when he’s going to pop off. There are some new faces with serious competitive pedigree as well: Alex Hall is on hand. He’s won three X Games golds, as is Aaron Blunck, a third-generation Crested Butte skier who won an X Games superpipe gold in 2017 and a world title in pipe in 2019. No one’s sleeping on 2020 champ Parkin Costain, either.

Oh, and did I mention the contest’s a go for tomorrow? It’s on!