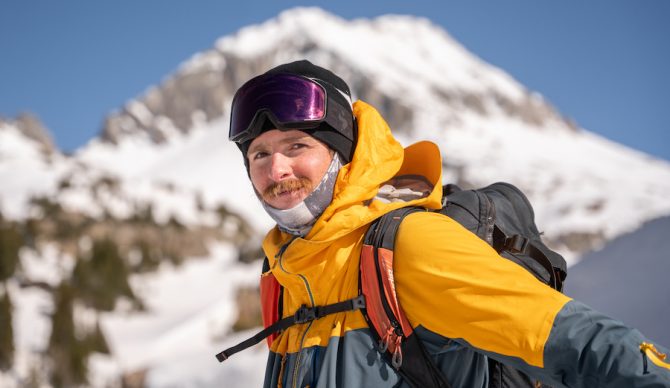 Michael Wirth is an interesting guy. Raised in Aspen, Colorado, I met Mike our freshman year of college, when he was deep in the pre-professional grind, studying economics and engineering. During the four years at school, I saw him change course pretty radically; going abroad on a semester to Europe and Morocco that turned into a year, and living out of his van on campus so he could spend weekends wherever he wanted. Mike is now back in Colorado chasing the dream of being a ski-mountaineer.

Colorado is known for its alpine peaks, specifically its “fourteeners,” or mountains higher than 14,000 feet. Seven of those are in the Elk Mountain Range, near Mike’s home in Aspen. Instead of sticking to the beaten path and skiing the well-travelled fourteeners, last spring Mike decided to tackle all 52 of the “thirteeners” in the Elk range, many of which come pretty darn close to the 14,000-foot mark anyways. The most interesting guy in my world ended up skiing all seven of the fourteeners as well for a total of 59 peaks in 61 days. Pretty impressive. He’s currently working to release a documentary of the story (trailer below), so in the meantime I got Mike on the horn to chat about his motivations for the project and what went in to his epic mission.

Mike! Nice work. Let’s start with the project’s inspiration and how it all went down?

So I grew up venturing all over the Elk Mountain Range as a kid. It’s my home mountain range, sitting right between Aspen and Crested Butte in Colorado. I did my first backpacking trip there and climbed my first fourteener, and I’ve always wanted to ski all seven of the fourteeners in the Elks. When COVID sent us all home, I was spending a ton of time out there in the mountains, and the second season that I was back I decided to try and experience them on a closer level.

The fourteeners are hyped a bunch because people want to climb the highest mountains. But the thirteeners definitely are less well-known. They’re a little bit shorter, but no less challenging, and there are a ton of them. And because people don’t really climb them there’s very little information about ascent and descent routes. So I saw this as a way I could get to know my home mountain range and do something new at the same time. So once the snowpack settled towards the end of March, I just started going out and skiing thirteeners.

And you ended up doing the fourteeners as well?

Yeah, so there are 59 peaks above 13,000 feet in the Elks, 52 of which are below 14,000. As the project progressed, I was dancing around the fourteeners, you know, getting every possible view of them from the surrounding mountains. Eventually I was like, “Yeah, I gotta ski those too.” And so I did. With the extra peaks it ended up taking 61 days in total. 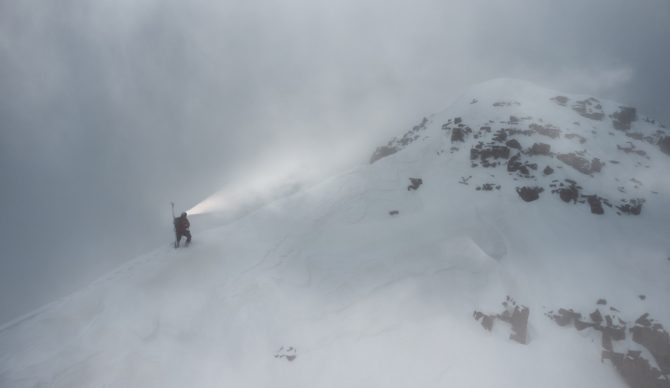 Can you give us a “day in the life” as you were out there?

In the spring, the primary concern for avalanche danger is a wet slide avalanche when the sun is higher in the sky. Depending on the aspect, you want to reach the summit around eight or nine a.m. in order to be skiing down as the sun hits the face so it’s no longer ice, but it’s also not slush that’s ready to fall off the mountain. So you wake up at two, start to skin around three or four and then you’re climbing up the face as the sun is rising, around six after you’ve trudged through a dark forest in the middle of the night. You get to the top and ski down around nine, make it back into town around noon. And in my case, with another mountain the next day, I’d eat the second I got back, dry out all my stuff, prep for the next objective and then go to bed. It felt like I was always moving for the whole project, whether I was climbing a mountain or getting prepared for the next day.

Were you doing a mountain a day? How did you space things out?

Yeah, it was pretty much a mountain a day. I took a couple of rest days here and there and then took like one day a week in April, which meant in May I wasn’t taking any rest days. But by then things started to flow really beautifully. I was understanding the snowpack super well and was feeling really fit, so I started linking together multiple peaks and I had a few really rad days like that. One of which I’m calling the “Granodiorite Traverse,” where I skied four summits above 13,000. That was a 30-mile day with 13,000 feet of vertical gain. I started with an east-facing aspect because that’s when the sun warms up first, and then did a southwest and then a north, and a west, just following the sun as it moved through the mountains. 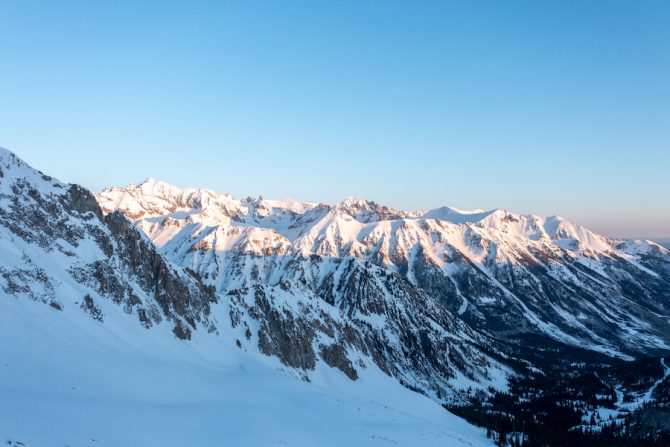 Tell us a little bit about the arc of the journey. Was there any point where you felt like you wouldn’t finish it or you were ready to give up? Or were you just dialed from start to finish?

So I started with some of the peaks that I kind of knew or that weren’t super hard to access and maybe had a report written about them. And then pretty early on in the project I had a bit of a gnarly experience. There were a variety of “crux” peaks to the project, two of which are on the same ridgeline as Pyramid Peak [one of Colorado’s fourteeners]. They’re right next to the famous Landry Line off of Pyramid Peak, and not that many people have skied those lines. I tried to ski one of them, which is called Lightning Pyramid, 10 days into the project and got about 300 feet from the summit before I had to turn around because of warming snow. And there were two other similar experiences where I failed to summit, also pretty early on. But I was able to go back and ski all three of those failed objectives, even adding on another peak in the same day as I learned how to play with aspects and sun exposure better later on in the project.

There was a defining moment where I ended up skiing Thunder and Lightning Pyramid in the same day, which are two of the most challenging summits in all of Colorado. And I did a first ascent on Lightning’s northwest face to its west couloir and that marked a pivotal moment in the project where I was feeling super fit, and knowing the mountains really well like being able to anticipate snowpack and how to move through them, and it just spiraled from there. 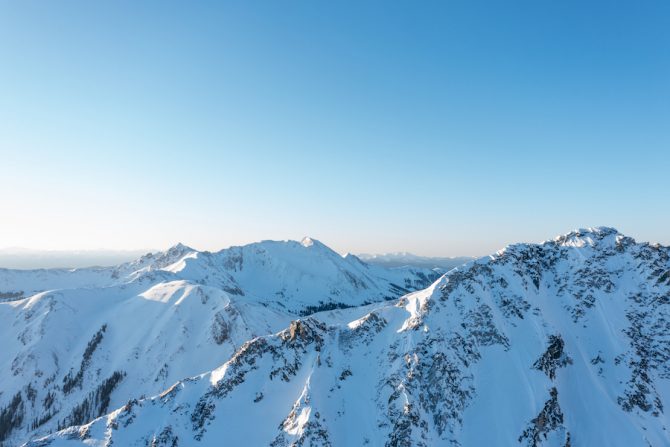 Tell us a bit more about these Thunder and Lightning peaks.

Totally, so Pyramid Peak and the Landry Line off of it are super famous. Anybody who knows ski mountaineering knows the Landry Line. Thunder is just to the south on the ridge line of Pyramid Peak, and it’s a 13,900-foot summit, so pretty much a fourteener. It’s also equivalently steep as the Landry Line, and the same with Lightning, it’s just a bit more south than Thunder. The whole ridge line is just super gnarly. It’s got 3,000 feet of straight up vertical relief, and so you have a pretty sustained 50-degree face on on each side of that ridge line. There’s no real easy way to get up besides climbing up a really steep face that’s 3,000 feet and then skiing back down.

What was your favorite line of the project? Anything you’re particularly proud of?

I’m calling the first descent I did on Lightning “The Bolt,” and it was a super-rad line. On Precarious Peak, I did another first descent on its north face that I’m calling “Shark Fin” because of the massive granite walls that tower over you towards the bottom. That was a really cool day. As for some stats on the project itself, I did six first descents, was the first person to ski all of the 13,000-foot peaks in the Elks, and I was the youngest person to ski and climb three of the most challenging fourteeners in Colorado which are Pyramid Peak’s Landry Line, Capital Peak’s East Face and North Maroon’s North Face. I also covered 519 miles, accumulated 220,000 vertical feet and spent 350 hours in ski boots over 61 days.

Wow, how’d your feet look after all that?

They were like, pretty gross honestly. Just because they get so wet from sweat or snow. And so if you’re out on 10 hour days, when you get back your feet look pretty bad, like you were just sitting in a hot tub for four hours, you know? 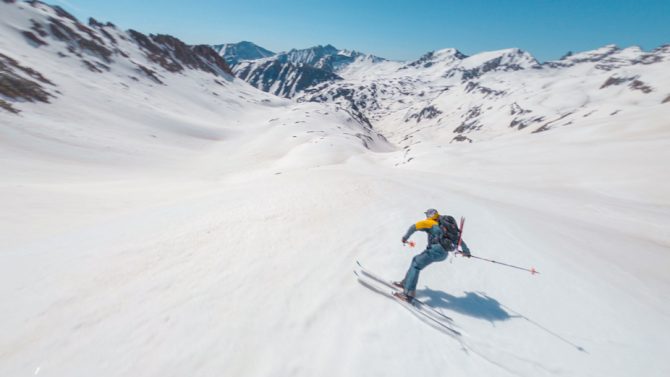 Yuck. What did you learn for yourself? Any takeaways? Words of wisdom? Nuggets of knowledge?

Yeah, the project meant a lot to me, both in connecting with the mountains, and really trying to indulge in the beautiful moments as they came. Waking up at 2 a.m. every day for two months was really hard. But then you make it into the alpine environment as the sun is beginning to rise and all of that fatigue disappears. It became all about waiting for those beautiful moments, being patient and knowing that they’ll come, and then indulging in them when they do.

Thanks Mike! Looking forward to the next project.

Thanks dude, me too!