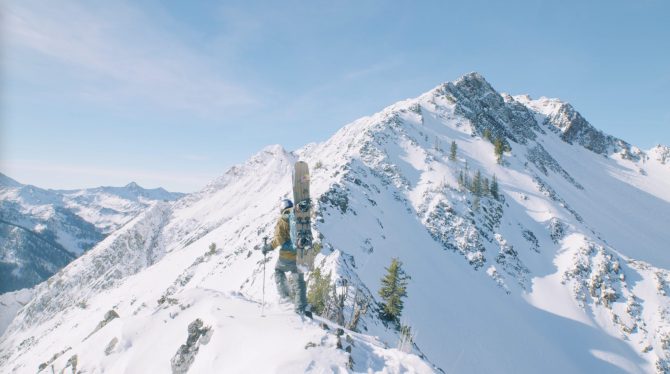 “You can’t blindly go out there trusting somebody that the avalanche danger is low. You need to make that decision for yourself,” says Nick Russell. Photo: Ming Poon.

Editor’s Note: If you’re interested in learning more about traveling, and riding, safely in the backcountry, check out Nick Russell’s Guide to Backcountry Basics here. The Inertia readers get a 100 percent discount with code WELCOME10.

Before heading out into the backcountry, expert splitboarder Nick Russell’s preparation begins days before the trip. This is emphasized heavily in his new class with Inspire Courses, Nick Russell’s Guide to Backcountry Basics.

Checking the weather, avalanche, and snow reports days in advance allows him to keep tabs on what the conditions are doing and how to determine the safest way to ride.

Depending on where you plan to snowboard, avalanche.org is a great website to gather information specific to a region.

While it is great to rely on these reports, they shouldn’t be something you put 100 percent of your faith in. Reports are fallible, and Nick emphasizes that it’s being out there and being aware that best helps you gauge your own sense of comfort with a given situation.

“That confidence comes with years of being in the mountains and noticing subtle changes. So you’re looking at the ways that the icicles are dripping off of the trees or the wind is blowing off of the roof of your house. It’s all of these little things that kind of paint this brush stroke to build the bigger picture,” Nick says.

Here are some of those subtle changes and red flags that Nick uses to decide whether he’ll switch to plan B or C for the day.

1. Has there been increased snow load, heavy snowfall in the past 24 hours? Was there just get a big storm?

If there has been snow, the avalanche danger is going to be pretty high. So you need to tread lightly.

2. Have there been high winds the past 24 hours?

3. Is the sun coming out? Are you expecting the sun to come out after a two-day storm?

The warmth from that sun can create increased weight on the snowpack and make it unstable.

4. When you’re walking around, are you noticing any cracking within the snow?

Is there any “whumping” or collapsing, which means that’s that new snow settling on a weak layer? And that is a major red flag. If I’m seeing cracking or feeling a little “whump,” or collapse I’m out of there.

5. Have there been recent avalanches?

You’re looking around. If you’re seeing a lot of natural avalanches out there, that’s a sign that it might be a good idea to head home, maybe go to the resort that day. It’s all of these little things once again, that paint this bigger picture of the complexities of being in the mountains. And it’s something that you really need to be vigilant of.

If you’re going to a new mountain range that you don’t know anything about, something that is extremely useful is seeking out local knowledge, finding that information from the people that are in those mountains every day is invaluable.

And if you don’t have any friends in that local area that you’re going to, hire a guide. There’s plenty of guide services in all the major mountain ranges in North America, which would just make your experience a lot more streamlined. They’ll take you to where the snow is good, and they’ll take you out there safely. And being able to mitigate those hazards is probably the most difficult part of this whole experience.

If you’ve noticing red flags, back down off the line. Celebrate backing down. That line is always going to be there. It’s going to be there the next day. And you can come back in better conditions and ride it the way you want to. If you were dead set on riding something and the stars aren’t aligning for it to happen that day, have different options because that only means you’re going to have more fun out in the mountains. It’s going to increase your chances for success, which is coming home with a smile on your face.”

Editor’s Note: If you’re interested in learning more about traveling, and riding, safely in the backcountry, check out Nick Russell’s Guide to Backcountry Basics here. The Inertia readers get a 100 percent discount with code WELCOME10.