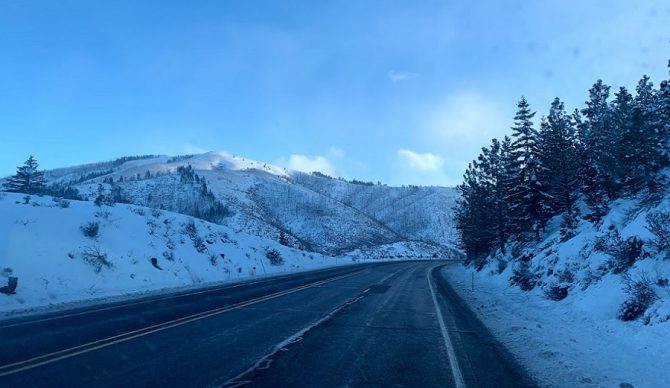 Snow is falling and ski resorts across the country are gearing up for a snow season that will be very, very different from years past. Snow sports may be naturally socially distant, but they do come with a couple of “pinch points” where social distancing is difficult, mostly centering around the lodge. One of the biggest changes for this snow season, barring the reservation system that most resorts will be using to limit capacity, is the suggestion that visitors use their vehicle as a lodge.

Joke’s on them, because I’ve been doing this “base out of your car” thing for a while now. Mostly because I’m too cheap to shell out $20 for a burger and fries from the lodge, but also because I’m usually based out of my car already. Going to college in the L.A. area for the past four years, standard operating procedure for a Mammoth pow day was load my roof box with skis to free up the back of my Volvo wagon for sleeping in, stop in Bishop to camp in the Alabama Hills, wake up freezing cold as the first rays of sunlight hit the jagged Sierra peaks, and drive the last 45 minutes or so to Mammoth Mountain. With a camp stove already packed, if I wanted a hot beverage I’d make it myself, beers would be packed as a matter of course, and I would snag some version of “lunch” on my way to the mountain (often candy and Cliff bars).

In an open letter to visitors, Mt Bachelor president John McLeod says “we expect and encourage guests to be prepared to be based out of their vehicles as a lodge this season, for booting up, warming up, and refueling.” Killington Resort in Vermont has stated the same, suggesting that the “new normal” will include “booting up in the parking lot, going straight to the lift and back to your car without ever going inside a lodge.”

While this may sound like a pretty simple plan on paper, there are a few hitches that could complicate things. First off, not all visitors to ski resorts come in a car. Many instead fly into resort towns (or as close as possible) and then use a shuttle service to get to their lodging and from there to the mountain. As a matter of course shuttles are going to be much more limited this season, and those who planned on using them might prefer to rent a car for their snow trip. Another potential difficulty will be getting to and from the car. On weekends at some larger resorts, if you don’t arrive at the mountain by 9 a.m., you’ll be parking pretty far from the lifts and then either doing that awkward ski-boot-swing-step (one of the few times I’m jealous of snowboarders) to the base of the mountain or taking a shuttle. Hopefully, with the crowd restrictions in place this year, there will be close parking for everyone, but in that case, only time will tell.

The biggest and most common difficulty, in my opinion, will be staying warm. While tailgating on a bluebird day sounds kinda exciting, on the coldest and stormiest of days, a poorly insulated car that’s been sitting in below freezing temps for a few hours is a poor excuse for a toasty ski lodge, especially for those with families. While I might be able to put down my back seats, hop in and get cozy in a sleeping bag, a family of five where all the car seats would be occupied won’t have as much luck, and will have a much more difficult time getting all the kiddos in and out of their ski boots to get warm in a vehicle.

Those with RVs or camper vans will probably have an easier (and more fun) time hanging out inside their vehicle to get warm, but for the majority of us without vehicles that double as houses, the ski lodge will be sorely missed. However, resorts are already thinking ahead on that score, in the same press release quoted above, Killington reports that it will be “…exploring alternative warming hut locations on the mountain like the K-1 Gondola barn for guests to re-charge.” Hopefully between the reservation system cutting down on crowds, cars being used as bases, and socially-distant warming huts all over the mountain, we’ll be able to enjoy a fun and safe ski season this winter.