Netflix Just Released ‘The Dawn Wall’; Here are 3 Reasons You Need to Watch It Tonight

A few nights ago, I watched a show I can’t believe I’ve never seen. I am not incredibly entrenched in the climbing world, so I can’t say it’s all that surprising, but The Dawn Wall is just… fantastic. A Red Bull Media House production in association with Sender Films and originally released in 2018 and just recently added to Netflix, it’s the story of Tommy Caldwell and Kevin Jorgeson’s first free ascent of El Capitan’s most daunting wall. Even more than that, though, it’s a story of love, heartbreak, friendship, and perseverance on a mind-boggling level. Tommy Caldwell’s story couldn’t be better for the silver screen if someone wrote it.

There are a whole lot of things in it that I didn’t know about Caldwell—which, I assume, are probably common knowledge to many of those in the climbing world. But with the soaring success of Free Solo, the Oscar-winning film about Alex Honnold’s historic feat, the non-climbing world has found a new interest in people who scale insanely large chunks of rock.

Here are three reasons why you absolutely have to watch The Dawn Wall tonight. 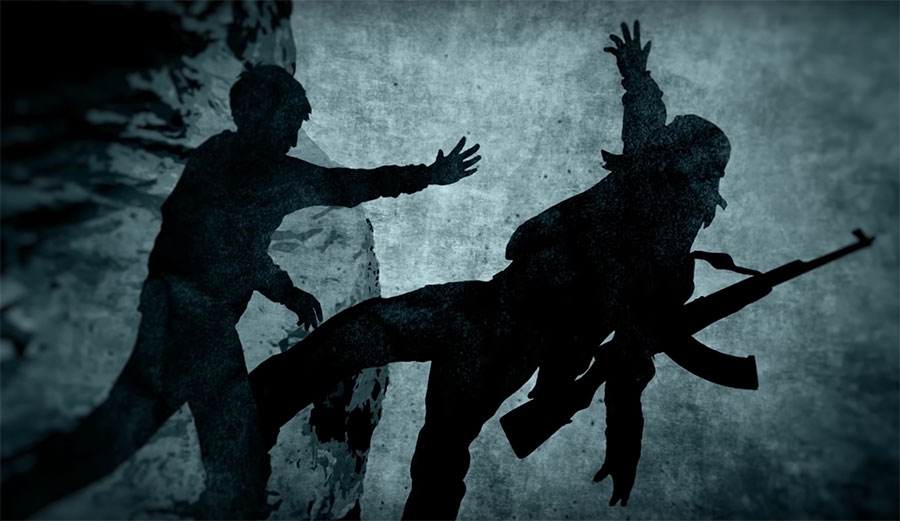 For years, Caldwell thought he killed his captor by pushing him off a cliff. Image: Screenshot

In 2000, Tommy and his climbing partners traveled to the Pamir-Alai mountains in Kyrgyzstan for a climbing trip. A few days into it, they were camped on a rock face. As the sun rose, gunfire erupted below them, bullets pinging off the rocks. “We were woken by three gunshots that came very near to where we were sleeping,” Beth Rodden, Caldwell’s now ex-wife recounted to National Geographic.

One of the climbers, John Dickey, volunteered to go down and see what was going on. He soon radioed back up to them and told them they had to come down. When they did, they were taken hostage by armed rebels who were at war with the Kyrgyz government.

For six days, they were led through the mountains by their captors. They were hidden during the day, starving, freezing, and exhausted. It soon became apparent that their captors had no real plan, and eventually, there was only one hostage-taker left to guard them. He was a 19-year-old militant, and on the sixth night of captivity, as the group stood atop a 2,000 cliff, Caldwell did something that would haunt him for years to come: he shoved him off the cliff. “I ran up behind him and grabbed him by his gun strap and pulled him over the edge,” Caldwell said. “We were probably about 2,000 feet above the river, but it’s a cliff that is pretty sheer. We saw him fall 20 feet, bounce off this ledge, and then fall basically into the black abyss below. I totally panicked. I broke down. I couldn’t believe I’d just done that, because it’s something that I never morally thought I could do and I never wanted to do. ”

Caldwell is a climbing savant. He is without a doubt, one of the best climbers who has ever lived. And he’s missing his left index finger. In 2001, the year after he was kidnapped, he was ripping two-by-fours into shims with a table saw to level a platform for a new washer and dryer.

“As I fed the pieces lengthwise, a two-by-four shot from the table into the hillside like an arrow,” he wrote in THE PUSH: A Climber’s Journey of Endurance, Risk, and Going Beyond the Limits. “I switched off the saw and noticed a few drops of liquid on the table’s black surface. I raised my left hand. Blood burbled up from the stump of a finger like water from a leaky drinking fountain. I saw the white bony stub of my index finger, the lower joint above the knuckle, some jagged flesh, and what must have been a tendon or ligament.”

Fingers, of course, are relatively important to a climber. His wife at the time, Beth, ran outside, found his finger in a pile of sawdust, packed it into a Ziploc bag. The couple raced to the hospital, hoping it could be reattached. Over the next few weeks, Caldwell underwent three surgeries. Doctors pinned the bone, patched together the nerves, and tried to sew together all the tiny veins. They were forced to remove the fingernail to drain the excess blood. It didn’t work.

“The index finger on my dominant left hand was now a throbbing stump, two-thirds of it missing,” Caldwell wrote. “The skin was stitched around the bone, edges protruding like a tiny calzone. Looking at it nauseated me.”

What followed was a comeback that will probably never be matched. He put his heart and soul into figuring out how to climb again, and climb again he did. 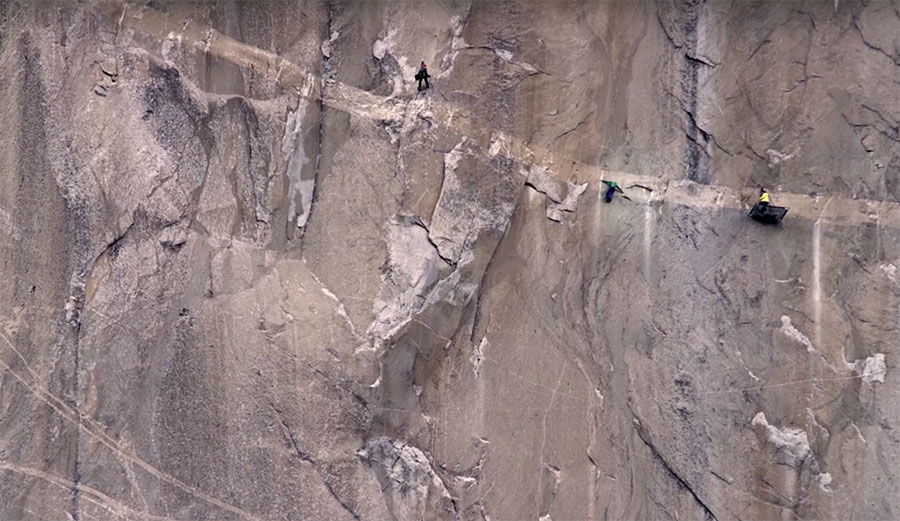 Pitch 15, a brutally difficult traverse of nearly bare wall, almost proved to be an impossible hurdle for Jorgeson. Image: Screenshot

Tommy Caldwell Might be the World’s Most Loyal Climbing Partner

Caldwell’s and Jorgeson’s ascent was years in the making. Caldwell knew El Cap better than anyone else on earth at the time, but Jorgeson was relatively new to big walls. Coming from a bouldering background, the partnership was an unlikely one, but as it turned out, it was exactly what both men needed to conquer the Dawn Wall.

One of the most difficult parts of the climb was something called Pitch 15. Essentially a bare wall, it’s a sideways traverse that’s necessary to get to the next climbable section. The whole route consisted of 31 pitches. After days of attempts, Caldwell finally completed Pitch 15. For Jorgeson, however, it proved to be nearly impossible. Attempt after attempt ended in failure, each one a little more heartbreaking. To make matters worse, the climb had attracted national attention, and crowds gathered in the field below to watch.

Caldwell continued up the route, rappelling back down to their portaledge each night, then climbing back up ropes to the spot he left off the day before while Jorgeson continued to try to get across the impossible traverse. Caldwell, now through 20 of the route’s pitches, could not wait for him forever. The wall was something he’d poured his life into. Jorgeson eventually decided he couldn’t be responsible for shattering Caldwell’s dream, so he decided to give up on the climb and belay Caldwell as he continued towards the summit.

Caldwell, however, had a moment of realization: he didn’t want to complete the climb without Jorgeson. With just 1,000 feet left to the top—and with the most difficult of the pitches below him—he returned to support his partner, telling him it didn’t matter how long it took. Eventually, Jorgeson completed Pitch 15, then went on to an 8-foot leap of faith in a section called the Dyno—one that was so difficult, Caldwell devised a much longer route to avoid it.

Eventually, the pair reached the summit together, but it never would have happened that way if Caldwell hadn’t proven his loyalty the way he did.

All in all, The Dawn Wall is a fantastic watch. It takes something that most people can’t relate to and makes it relatable. Interviews with journalists, family, and friends of Caldwell and Jorgeson provide a look into what it’s like to watch something so monumental in real life. The Dawn Wall has all the elements of a great story, each one made better by the fact that they really happened. If you’re looking for something to watch that will stick with you, block off two hours tonight.