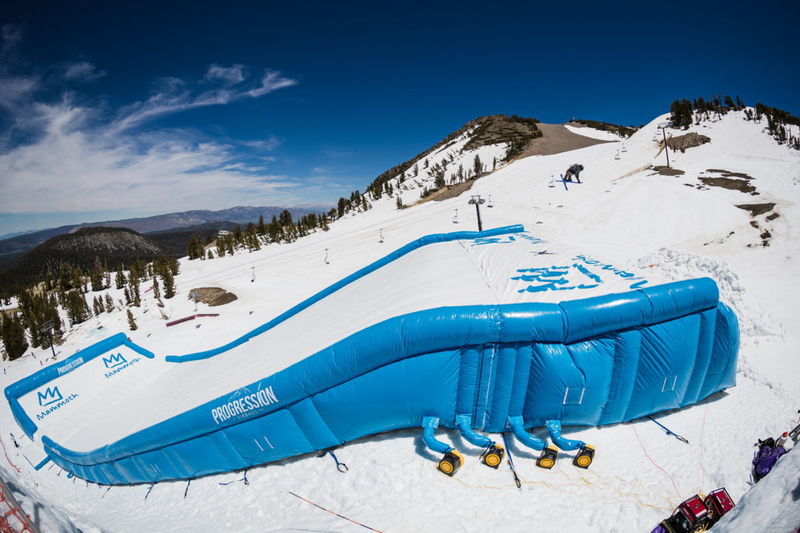 A new type of airbag is allowing Olympic slopestyle competitors to take their training to incredible heights. They’re called sloping airbags, and they’re exactly what they sound like – giant airbags in the shape of a mountain slope. The innovation is giving athletes the ability to perform tricks that may be difficult or dangerous with the confidence of knowing they aren’t going to seriously hurt themselves if they eat it. Not only are they able to land safely, as with a normal airbag, but a sloping airbag allows the athlete to ride out of the landing as they would during a competition.

It’s no secret that, to be a slopestyle competitor, one must get comfortable in the air, doing insane tricks, and then, of course, landing them. It’s also no secret that it takes an incredible amount of hard work. These airbags are cutting out all the waiting for pow-days, and jumping right to the training. Athletes can train year round without fear of injury – not just when enough snow is on the ground. The artificial slope is carpeted with short rubber prongs that provide resistance similar to snow. These training tools are being called dryslopes, but in some cases, they are covered in water to provide more speed.

Sloping airbags are becoming popular simply because anyone can benefit from using one – novice to expert freeskiers and snowboarders, too. One airbag manufacturer, Acrobag, builds airbags for facilities all over the world, including Mammoth, Whistler’s Summer Gravity Camp, Momentum Ski Camps, Camp of Champions, and for the national Olympic teams of New Zealand, Australia, Germany, Japan, Canada, Italy, Finland, Ireland, Spain, France, Switzerland and the USA. After partnering with Katal Innovations, the companies have formed Progression Airbags, with a goal of providing products and services to create dryslope facilities for clients everywhere. Again, the huge advancement with the sloping airbags is that a rider is able to ride out of his or her landing instead of just crashing into an airbag, ending the ride.

“It’s such a super safe set up,” Julia Marino, the 20-year-old winner of the 2016 big air world cup told the Denver Post. “Having that aspect with a pretty realistic jump takeoff into a close-to-realistic landing is so helpful in learning new tricks because you don’t really have a lot of fear knowing it’s a really safe landing. So you can pretty much try everything you want. The repetition part is so key because you can do that trick a bunch of times until it’s pretty much solid. Everyone is starting to use them now. Some people might say well, that’s not technically snowboarding, but I think it’s a good way to progress in a safe way. It’s a huge step in the progression of our sport.”

The use of sloping airbags is not only evolving the way athletes train but expanding the demographics of competitors in slopestyle sports. Now that year-round training can be available anywhere in the world, the sport is becoming increasingly more accessible. Though it seems like a win-win for all, some athletes aren’t exactly stoked about this new innovation.

“I think (it’s) really whack in general and I wish it was banned from snowboarding,” said Jamie Anderson, now a two-time Olympic gold medal winner after taking the slopestyle this weekend in South Korea. “It was a complete game-changer from when you learn things from the ground up like back in the day when you had to wait for pow day and build a jump and to try the tricks you want to do. I think airbags are cool and they are definitely progressing the sport, I just am not the biggest fan. It’s just changing our sport a lot and it’s awesome in ways and it stinks in ways.” 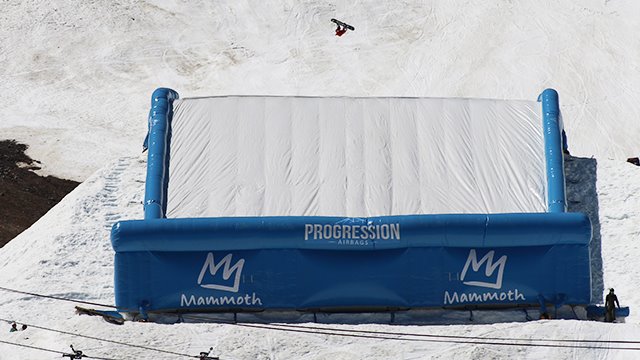 The Progression sloping airbag at Mammoth

What once required months of painful confidence building and waiting, is now obtainable in a few sessions of jumping into an airbag. Yes, it’s a pretty harsh way to look at such a good thing that prevents injury, but it’s the view some veteran athletes are taking. But is that like your dad telling you he walked to school in the snow uphill both ways? Okay, you can kind of see the old guard’s gripe, and how some athletes would rather have the future of the sport take the more difficult, character-building route.

But despite people’s opinions, professional athlete or not, there is no questioning the effectiveness of these new training tools. Sloping airbags have the ability to give anyone the chance at slopestyle freeskiing and snowboarding, and there’s really no telling what this could mean for the sport. We could see athletes coming from all over the planet to compete – not just guys and girls who spend most of their time in the snow. It may seem somewhat unconventional, unfair, or just plain lame, but there’s no denying the safety that it presents to its users, and the opportunities it may give to others.