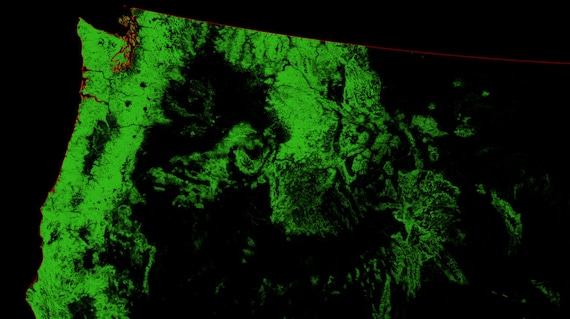 A depiction of the forests currently covering the western U.S.

Earth’s forests are one of the planet’s most precious resources. That’s why geographer Robert Szucs decided to present the world with a unique perspective of the tree-covered areas that still remain on our beautiful planet. Szucs, of Etsy page Grasshopper Geography, has created a series of maps depicting woodland areas, and they are absolutely stunning to look at.

If you didn’t know any better, you’d probably think that you were looking at a weather system through satellite imagery. Szucs used open-source Geographic Information Systems to compose these – the green being forest, and the black obviously not. The brighter and more vibrant green represents areas that are more densely forested.

I was pretty blown away to see the lack of forests in America’s western states, but I suppose that only makes sense with how much high desert exists there. In addition to an incredible U.S. forest map, Szucs has created forest maps of other locations as well, such as Canada, Sweden, Germany, and South America’s incredibly dense Amazon rainforest. This guy’s got you covered on almost every forested region that you might want hanging on your wall. Szucs created these maps as a follow-up series of watershed maps he created depicting the Earth’s major drainages. 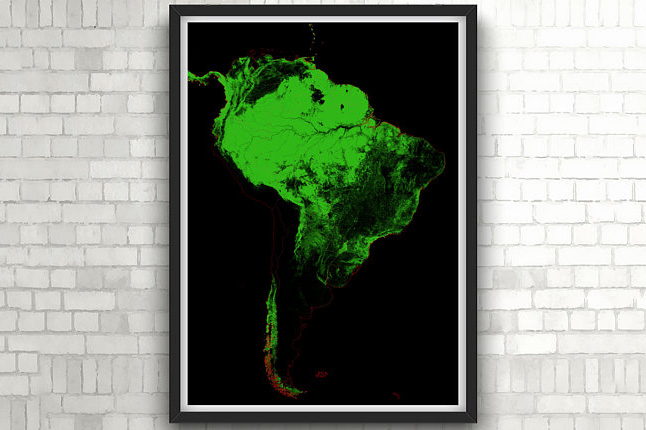 Not a bad look for your wall.

“My inspiration was similar to the process with my river maps,” Szucs told The Inertia. “Half of it was a frustration with all existing maps in that area, and how none of them made you say ‘Wow, I want this on my wall,’ and the other half was a strong belief that I could do better.”

You can get yours on the Grasshopper Geography page on Etsy, where the maps are sold for eight bucks. When you purchase the map, you also get the extremely high-resolution image file, which is 14,043 x 9,933 pixels . With the file, you can print the map on whatever you’d like, whenever you’d like – sounds like it could be a cheap Christmas if you have a wealth of nature-loving friends.

“I definitely wasn’t surprised by the end product,” Szucs said. “As a perfectionist, I spent days just to fine-tune little details, width of lines, shades of green and red, and quite early in the process I felt that the end result could be something special.”