Every fall, the collective attitude of ski town residents ebbs and flows on a chart that directly correlates to the snowline. Here in Whistler, that point was brought to light this week when winter showed up overnight after nearly two months of rain.

With a respectable start, the snowline started creeping down to the valley toward the end of October. In November, the temperatures rose more and it rained all the way to the peak for a week straight. When Whistler/Blackcomb announced they were opening a day early last week, the fanfare was minimal; at least to those of us living here and could visibly see the snow pack. Plus there’s been a bit of collective uncertainty about the future now that Whistler/Blackcomb is an extension of Vail Resorts and the powers-that-be just laid off 60 long-time employees. It was easy to see why that the rain produced crankiness in the village. 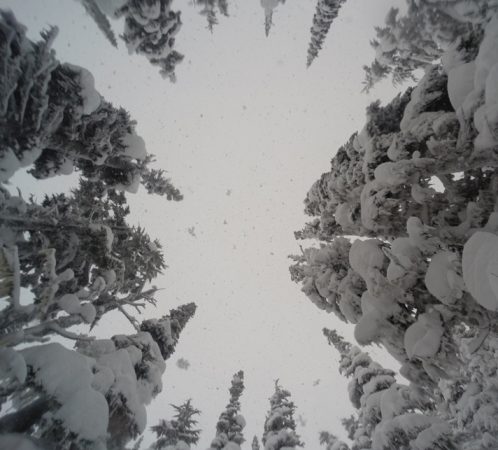 When it’s this deep, you see this view from time to time.

No matter what the conditions it’s worth it to be there opening day. The first day at any resort is mostly a celebration of what’s to come. Many of us who line up in the morning have been waiting since the last time we took off our boots 6 months ago in the spring. It’s a time when you see all your old shred pals: some you know well and link up for a few laps, others you simply recognize and give a courtesy head-nod in the lineup. It’s a ceremonial step into an old routine as you shake off the dust and remind yourself why you work that shitty job, live in squalor with too many people, collect coupons and blow your entire paycheck on the latest gear. Of course you hope for good conditions, but that’s not really what it’s about. Or so I told myself earlier this week as the rain fell outside my bedroom window.

And then it happened. Winter showed up overnight.  A huge dump of snow buried the valley on Tuesday, shifting the collective mood of everyone in town: pure stoke was in the air. All the motivational speakers will tell you how quickly things can change in a day; and I suppose this was Mother Nature’s way of proving that point. At the time of writing this, over five and a half feet of snow has fallen in the past week. That is a hell of a lot. Thanks Earth.

Diggin' deep with Dave at the opener today.

So as Whistler opened on Wednesday there was more to celebrate than the usual feel-good nostalgia that floods back as you get into winter mode. It was a pow day. A really good one. In two days we were basically dropped into mid-winter conditions with literally bottomless blower pow—the snow didn’t have time to settle before the lifts spun. If you didn’t know where to go or how to ski/ride in powder you might get frustrated, obviously, but for those of us who came prepared, it was a day of days. 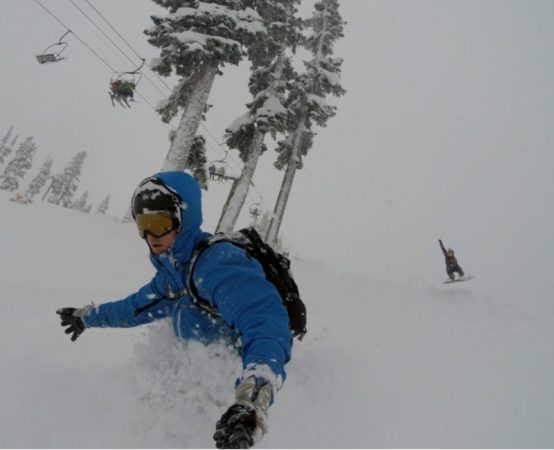 Waist deep and air, right underneath the chair!

Doing It All Again The Next Day: 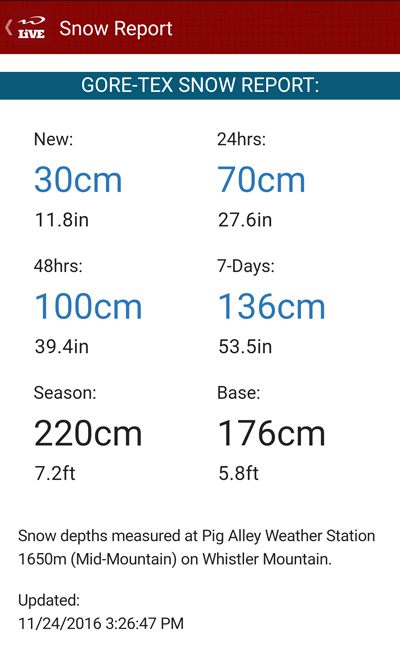 Blackcomb Mountain opened on Thursday. On Wednesday night it snowed another foot and a half. You never want to jinx a situation by claiming that the snow was too deep. But holy crap.  It probably didn’t help that I put in a full day the day before and my legs were basically trying to prove a point. No matter how long you go to the gym and try to bulk up beforehand, nothing prepares your lower body for the nuances of deep snow. There’s only one way to get through the gauntlet. Yet despite the pain and fatigue, that inner stoke was enough to power me through one of the best sets of opening days… I’m going to say it… ever.

How was your Thursday morning? Best opening day I have EVER had, maybe one of the best pow days on Blackcomb …ever! wtf @austensweetin #thanksforgiving #powderhounds #faceshots #waterdamage

Today it snowed another foot. There is more forecasted this weekend. Winter is here, and right on time. Happy Thanksgiving, indeed.