Words Of Wisdom With Donavon Frankenreiter 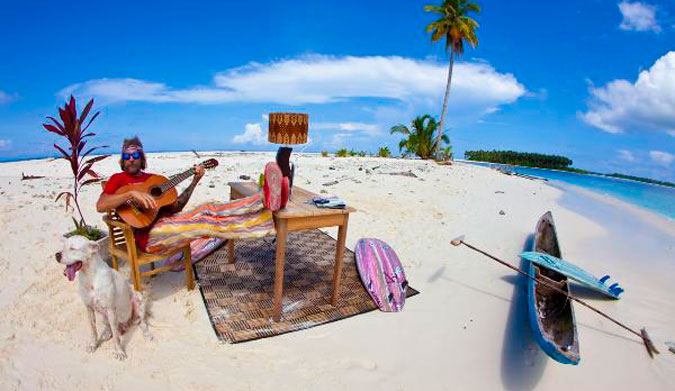 Donavon Frankenreiter is an ambassador of cool in the surf world. He’s always had is own style in the water, and since the launch of his self-titled solo album thirteen years ago we’ve been able to catch that style with groovy, funk filled tunes on stage.

He’s at it yet again with a new album on the way. Several tracks are already in the bag, with the crew hard at work in the studio RIGHT NOW and we’ve been able to catch them jamming away live all week.

Taking a break from his studio schedule, Donny jumps on the phone to offer his two cents on the unique path of a professional surfer and professional funkmaster, family life, and more. Here are some highlights from that convo…

This new record’s sort of going back to where it all began with acoustic stuff and some pretty basic harmonies, just like that first album, only thirteen years older. It’s a lot of what we’ve learned over the last thirteen years of touring and songwriting, so I think this is the best record we’ve ever made. Sometimes when you start a project it can take you a week to do a song but this one’s just crazy how it’s coming together. People have been able to log online and watch us create, but it’s cool because you can see us getting started at ten in the morning then check back in at the end of the day and think “no way, that’s how it all came together.”

I wanted to make this album as simple as possible. I wanted to break it down and make it the most honest and intimate I could. This is what we are now. What we’re living and what we wanted to create. So now we’re basically just an acoustic guitar, a bass guitar and drums.

I get to travel and play music and surf. It’s sort of the best of all worlds. It’s not like I ever have to do a live show at six in the morning, so people always remind me surf all day, play music all night and I’m like “right on!”

Surf culture’s so far and wide. It’s really everywhere. I find myself in some crazy places to play shows and it’s like a surf festival. You’ll ask “where’s the beach” and people are saying “no, we ride waves on the river!” Everybody loves surfing… it’s all over the place.

The family’s been all over the world with me. My wife and I have been married fourteen years. My kids have been everywhere with us. They’ll just pick and choose which places they want to go with us. But if I ever leave for more than three weeks, they’ll come out with me and we make it work. That’s our lifestyle. It gets hard sometimes because I haven’t been home for a birthday or an anniversary for thirteen years, but you think of what we’re doing and the payoffs are something we love.

I’ve known this life since I was fourteen. Now I’m forty-two. I’m used to it. Yeah, it would be nice to be home a little bit more, but that’s what the surfing does for me. It’s that adventure. It’s the travel. And it works with the music because nowadays you’ve got to take the music to the people, playing live music to make a living. It’s not like I can put out a record and sell tons of albums because nobody buys records anymore. So I feel fortunate that I get to tour more than just America. Australia, New Zealand, Europe, Japan. And I think a lot of that opportunity has to do with surf culture and the music crossing over to so many different places.

I just want to be the best husband I can. The best dad to my kids. Just like every time you make a record you want it to be the best that it can be. I just try to go with the flow and have fun. I could do this until I die, making a living playing music and touring. I have two really fun things, music and surfing, that are timeless. There’s guys in their 70’s ripping at San O, so I can always do that. And for musicians, as they get older, as long as they can still hold a tune it’s always great to see some classic musicians perform. I feel like what I do is a part of my life in such a way that I couldn’t just stop doing this.

For a sneak peek at some of those newly recorded tracks, check out Losing Streak, You and Me, Little Shack, Women, and Big Wave