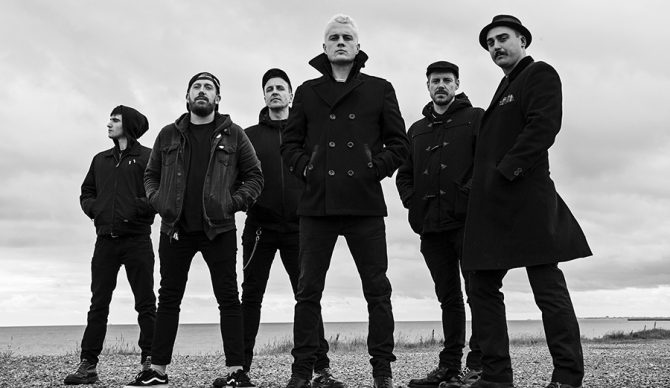 The Bar Stool Preachers are a band that’s excited to tell you about their beliefs, their passions, their goals, and their dreams. In August, the six-piece group from Brighton, England released its sophomore album “Grazie Governo,” an infectious collection of ska-infused ditties intended for today’s skankin’ youngster and intellectual punk alike. I recently caught up with frontman TJ McFaull (son of Colin McFaull of the legendary punk band, Cock Sparrer) to chat surfing, festival memories, and his fascination with the band Abba.

The term “bar stool preacher” has an obvious meaning, but is there a particular story or person that inspired the band name?

With the pub culture in the UK, we all grew up knowing a bar stool preacher. We all knew that one uncle that would get too drunk and start saying shit. For me, there was specifically one great uncle who was always the guy where it was like “Oh, he’s talking again?” He was the one dude that would spout whatever he felt was appropriate at the moment. There was a song from a cult-hero band in London – the band was called Chas & Dave – and one of their lyrics was “Barstool preaching. That’s my old man’s game!” and as soon as we heard it, it was like “That’s it! That’s us!”

My girlfriend and I were listening to your new record, Grazie Governo. She doesn’t know a lot of punk or ska but she heard the first track and described your music as “21st Century storytelling.” What do you say to that?

Fuck yeah! That is, without a doubt, one of the best compliments we’ve had, especially from someone that doesn’t have the scene context. We’re in a lucky position at the moment in that not many bands sound like us. We’ve always focused on the narrative and used the band as a way to try and relate to people. That’s missing from music right now. There is no sense of community. Being a touring band that gets across the world, we see the same things everywhere from Berlin to Baltimore. People feel completely underrepresented and unheard. So yeah, “21st Century storytelling” is absolutely perfect because that’s what we are trying to do.

You funded this album yourselves, correct?

We did, man. We absolutely did. We’re still eating dog food but we managed to put out an album ourselves again (laughs). We had a few good offers from decent-sized record labels but we wanted to keep autonomy of our music. We understand the creative process and it’s really hard to disengage with the connection you have to your own product. We’ve always had a rule that if you don’t care about our band as much as we care about our band, you’re not going to be part of the plan.

In another interview, someone asked you about your reception on stage as a new band and you said “I remember one big skinhead at a particular London show looking at us with our beards and spike green hair that looked seriously unimpressed before we’d even started. By the end, he was properly dancing away, all the while trying to look like he wasn’t enjoying himself!” Do you still find yourselves in those situations?

Hell yeah. The underdog card is something that we love. A lot of the modern music world right now has this mentality like “I’m going to doubt you until you prove to me that you’re worthy of my time.” That comes down to a few things. Live music is underfunded right now, so people show up and think “If I’m spending my time and money on you, you better be good.” For us, it’s always been like “Ok, let’s go out and impress these people. Let’s do whatever we can to make sure that whoever comes to our gig has the time of their life.” We play music to people sometimes that don’t necessarily align themselves with our leanings. It’s always a bit of a trying time to engage with everyone that is in the crowd. We deliver a message and try to talk about things that are important to us, but sometimes when you try to feed medicine, you’ve got to put it in peanut butter if you know what I mean. You need to make people dance and have a good time before they’re willing to listen to your message.

Your band has pretty diverse musical tastes ranging from the Menzingers, Woodstock bands, hip-hop, the Bosstones, NOFX and more. How does this mix of influences affect the music you write?

You kind of have to open your head up to other people, especially if you’re going to be married to five men at one time. You have to be totally accepting of what other people like and think, and you have to assume that they’re always right, which is not an easy thing to do. The musical diversity of the band provides us a really, really good springboard for new ideas. Some of our favorite bands – like The Menzingers or Bouncing Souls, for example – seem to have this set formula that works for them, but for us, it’s always been about what you can write and what you can create that has the most value to you. That’s hard to balance when you have five or six people in the dynamic. But again, if you work under the assumption that the guy next to you has a valid opinion, you’re always on good footing.

What music is currently in your listening rotation that a fan of yours might be surprised to know about?

Oh, that’s dirty laundry man! I won’t drop the other guys into the mix except for our drummer. Our drummer likes a lot of modern pop and old jazz. It’s a bizarre mix with him. One minute he’s listening to Rihanna and the next it’s Duke Ellington. For me, I love Abba. They wrote some of the greatest pop songs of all time! With our next album, we’re jumping into something we call the “Abba chorus” technique (laughs). It’s like come up with a verse, come up with a chorus, then write a better chorus and turn the first one into a verse. Those guys had hooks coming every which way.

I hear you are a master diver and you surf.

Well, first of all, this is one of the most “out there” interview sources we’ve ever had. When Vanessa got in touch and said we’d be doing an interview with a surf site, I said “Alright!” It’s fucking cool man. I’ve been diving for 14 or 15 years and I grew up as a kid with massive ADHD. I was in therapy starting at age 8 or 9 trying to get in touch with my own head. My parents suggested that maybe I would enjoy diving which was really left field for some kid from East London, but as soon as I did my first dive it felt natural. I’ve always felt a huge affinity to the ocean. I just can’t help that. It’s always been undeniable in me. The feeling of insignificance helps me to ground my head when everything is going a million miles an hour. To have something where it’s like “this thing is it’s completely own entity and I’m here doing my thing” always helped me keep a finger on my own mental health more than anything else. With diving obviously comes a hell of a lot of time in and out of water and if you’re a person like myself that gets a kick out of being anywhere near it, you might as well find some sort of activity where you can enjoy the rest of it.

Surfing, for me, probably came into it at about age 17 or 18. My last big trip to dive was at Komodo National Park. It was wicked. I was out there for three months leading people around and teaching classes and that sort of stuff.

Have you written any songs about the ocean?

Definitely, in the future, I’d be open to exploring it. There is a song on the new album that was included on the official Spotify punk playlist called “2:22” and it’s about not being able to relate to a partner. For me, the best example of that is when you’re going against a current or you’re just out in the middle of the ocean. That song probably has the most water metaphors or conveys the feeling of being in the ocean at the same time as struggling with your emotions.

What surprises you most about touring in Europe versus the United States?

The US is a lot like the UK. You turn up to the venue and they give you a bag of chips and a begrudging handshake (laughs). In Europe, they get a lot more government subsidies so they respect and treat the artists better. So I’ll do Europe versus America and the UK.

The reception, without a doubt, has always been incredible for us in all the European territories. The difference is that a lot of the stuff in the UK or America is a lot of self-made artists. Especially in the subculture, people don’t want to hear any more Ed Sheeran or Justin Bieber. They want to hear someone with heart, someone with more of a message. In Europe, it’s still a little bit glossier. But again, they get a lot of people that are genuinely interested in music out there. The artists get treated really well there.

Check out The Bar Stool Preachers on tour this fall with the Interrupters.  For tour dates, visit here.