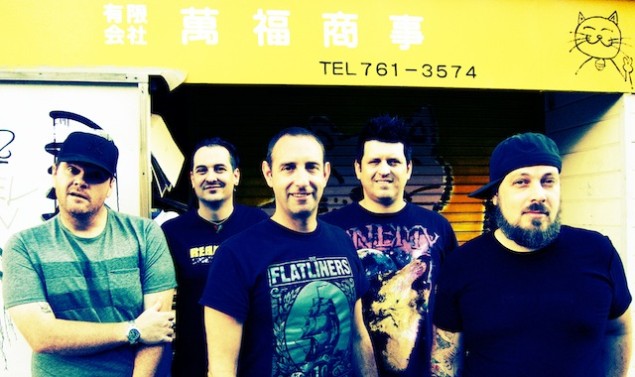 Corey Jones: So where am I catching you?

Chris DeMakes: I am in Florida at the moment. We haven’t left for tour yet.

Well, we’re gonna rehearse next week then we leave the following week. So yeah, we’re getting a couple rehearsals in. Been doing interviews lately and getting things together for the tour.

I got a chance to listen to your new record “See the Light” this week. Tell me about it.

Well, it’s thirteen songs that we recorded in Gainesville at our bass player’s studio. We had it mixed out in Colorado by Jason Livermore out of the Blasting Room. I think sonically it’s our best sounding record we’ve ever done as a band. The sound is amazing. We’re really proud of the songs. They’re some of my favorite songs we’ve ever recorded as a band, but music is so subjective that to say “This is the best thing we’ve ever recorded!” is, you know….Music hits people at different times. People that were listening to us maybe back in the ’90s or something might listen to this and it might not him them that way because they’re not 16 years old anymore (laughs). Again, music is very subjective.

How did the songwriting process differ – if at all – for this album versus your past ones?

You know, it’s all pretty much the same at this point. Our bass player and I write the majority of the riffs and melodies on the songs. Our sax player, JR, writes as well. He wrote a couple songs on this record. The three of us will write the stuff and once we get the shells of the songs together and the melodies, we’ll let Vinnie, our drummer, start writing lyrics and give us ideas of what he has around the songs. Then the horn players, of course, will get the songs at that point and they’ll start coming up with horn arrangements for the songs. Slowly but surely they end up coming together. Some ideas were floated around for this record that didn’t rise to the top for whatever reason, so that happens too. But for the most part we all kind of write on our own and then it comes together and from there it all sort of grows organically.

How many songs were recorded for this record and how many ended up getting scrapped?

Ummm….well, no songs were scrapped, per se. If they didn’t get past the idea or riff stage they were scrapped, but there weren’t any complete songs that were scrapped at all. There are two songs we recorded that didn’t make the record which I guess you could consider b-sides and then we recorded a cover song that went to a tribute comp for this band called Parasites – we recorded a cover song of theirs for their tribute record. And we put out a flexi disc that we released a month and a half ago in Gainesville – it’s the fight song for the University of Florida Gators football team. We recorded that (laughs).

How did you all decide on the first release, “My Money is on the Long Shot?”

We didn’t, actually. [Fat] Mike from Fat Wreck Chords thought we should go with that song. He thought that that was the one song on the record that sounded like old Less Than Jake and that our immediate fan base would gravitate to it. He knew without a doubt that if you like Less Than Jake you would like that song, so he thought it was a good introduction to the record.

So the Fat Tour starts in November. How did you end up headlining that tour?

Well they’ve been sending the Fat tour out now for probably over ten years, maybe longer than that. We found out that Anti-Flag was back with Fat Wreck Chords – they’re doing a new record with them probably next year – and we thought what a cool thing it would be to tour with those guys again because years ago when we first got signed to Fat, we did our first tour being on Fat with Anti-Flag. So it kind of tied in together with that. And it was also kind of a no-brainer. We have a new record coming out on Fat Wreck Chords, Anti-Flag is back on Fat Wreck Chords. We just decided to go with it.

Having been around for so long now, I’m wondering if there are towns or venues on this tour that you guys are playing for the first time.

Yeah, the venue in Chicago (Concord Music Hall) we’re playing for the first time. We’ve never been there because it’s a new venue, a new place (laughs). Other than that…umm…yeah, LA we haven’t played wherever we’re playing. Where the hell are we playing in LA? Is it The Fonda Theatre? It’s not the El Rey. I can’t remember the name of it…

What’s it like playing at Slims in San Francisco? It’s always seemed like such an odd place for a show to me.

San Francisco’s weird, dude. The venues there have never been my favorite venues. I mean, you’ve got Bottom of the Hill which is just a bar, essentially. Then we were playing this hotel place a couple times, but the shows weren’t that great there. For lack of a better term I guess, Slim’s is the best of the bunch (laughs). It’s alright, but it is weird. It doesn’t feel like a venue when you’re outside of it.