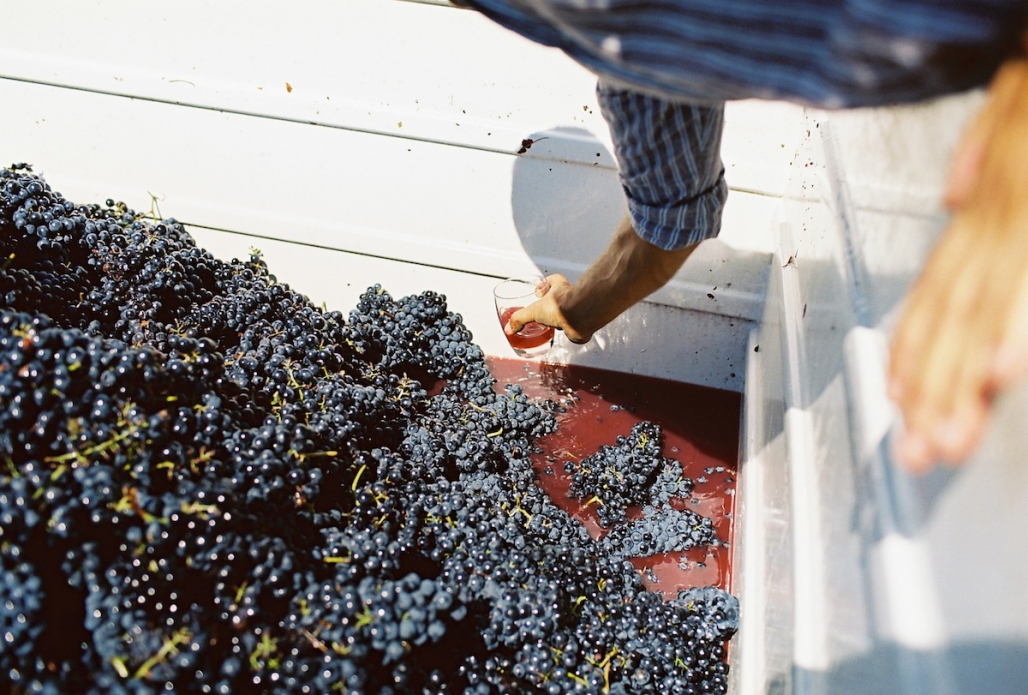 “The idea of three months in Italy with good food, friends, family and wine. That just sounded like a fantastic project to be a part of,” says the director Jason Baffa. Photo: Bella Vita 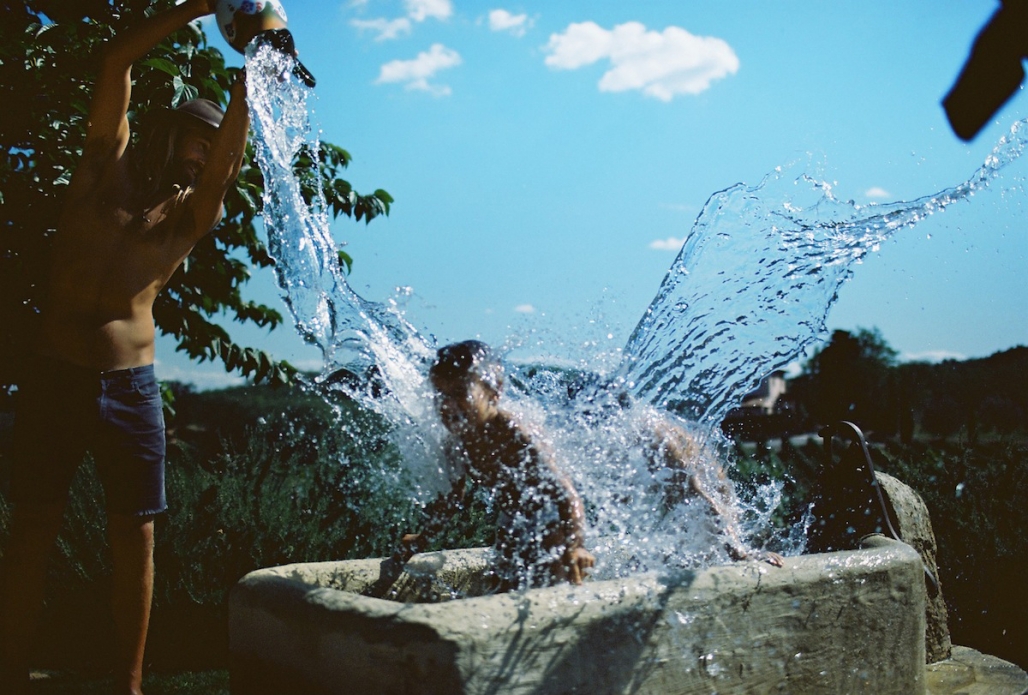 Italian culture is based on simple things. It’s mostly being natural, such as kids having some fun with water. Photo: Bella Vita 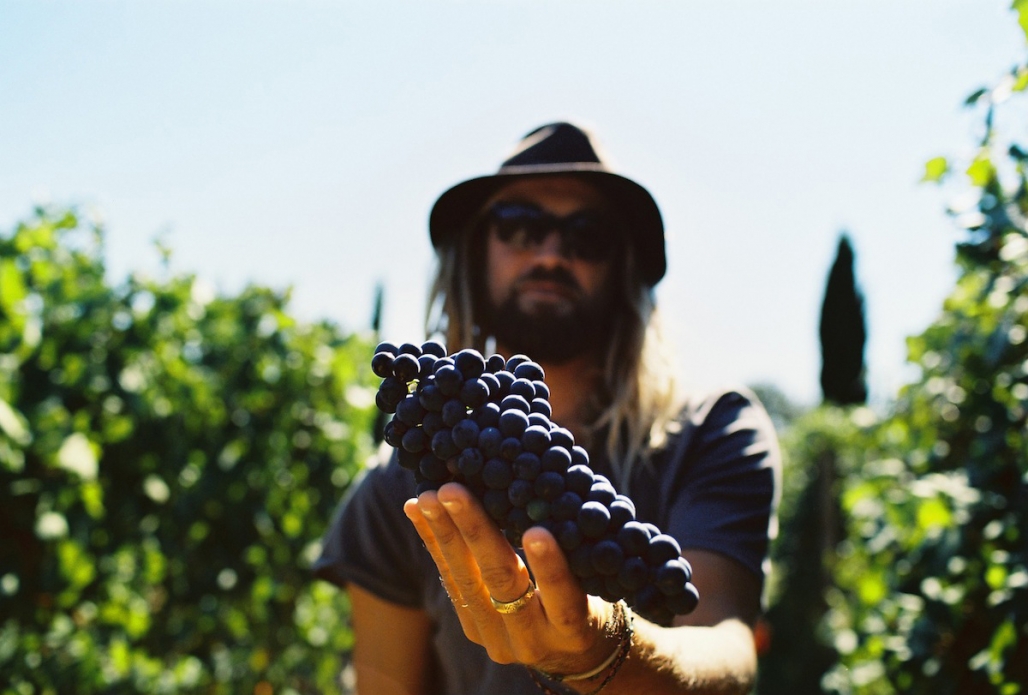 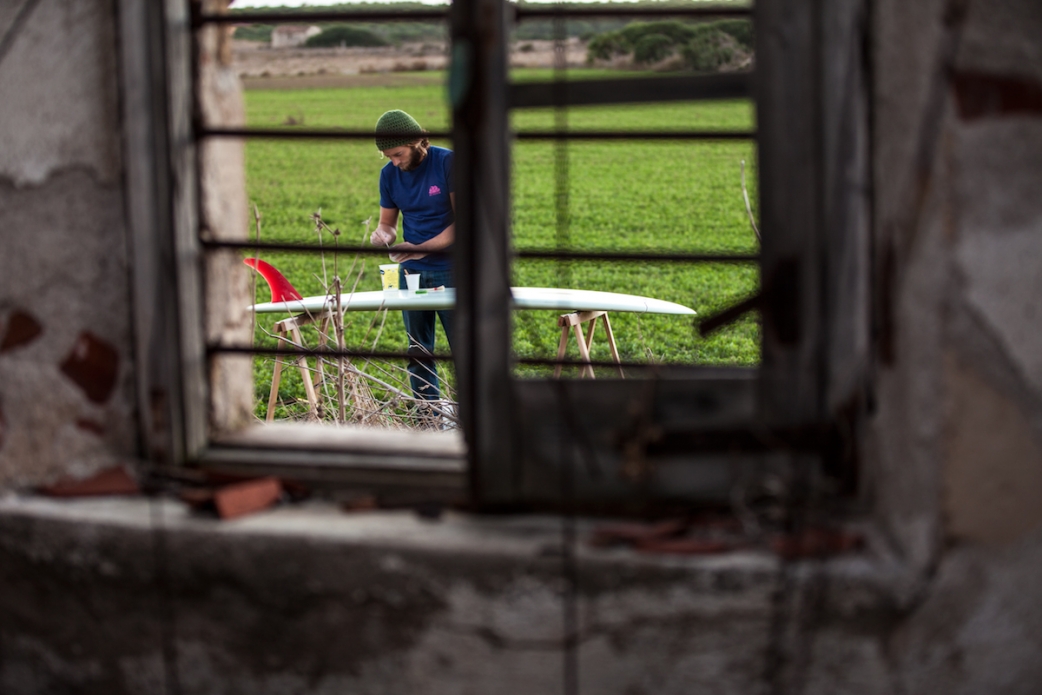 Surfing is also about taking some time for yourself, and painting your favorite single fin board. Photo: Bella Vita 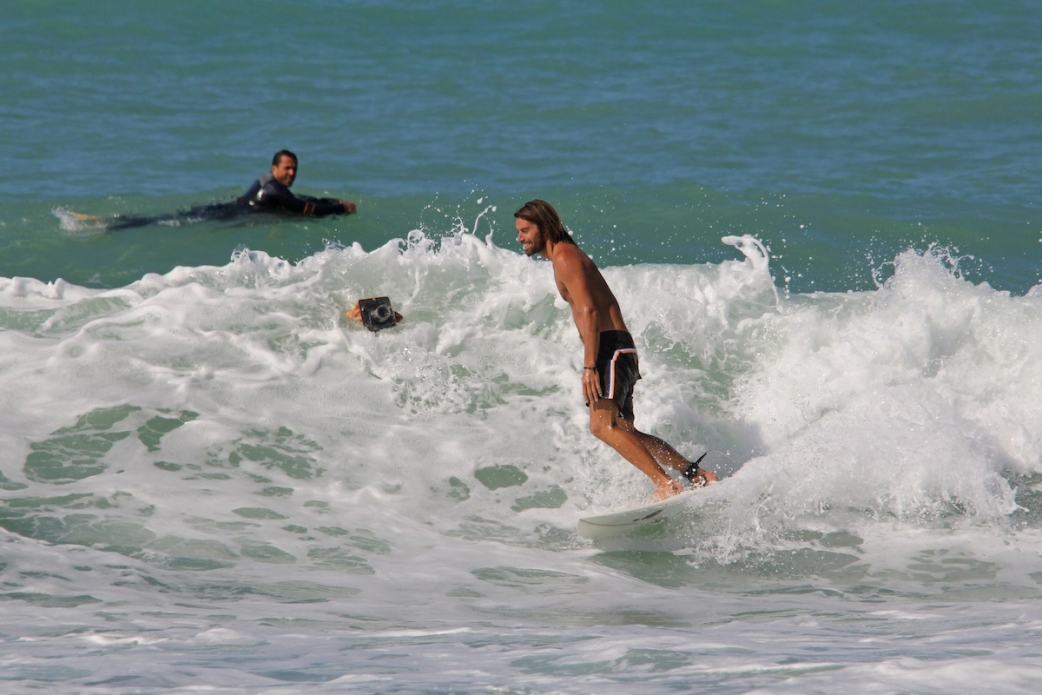 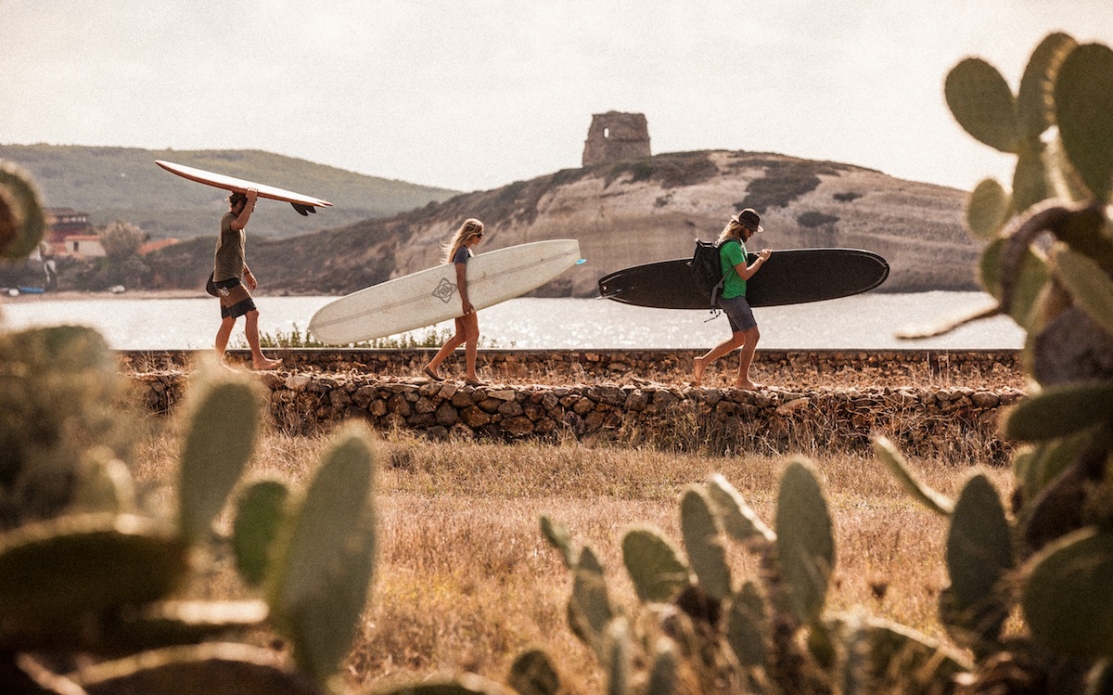 Surfing is such a pure experience. It can be tiring sometimes. But you always get what you worked for once you jump into the water. Photo: Bella Vita 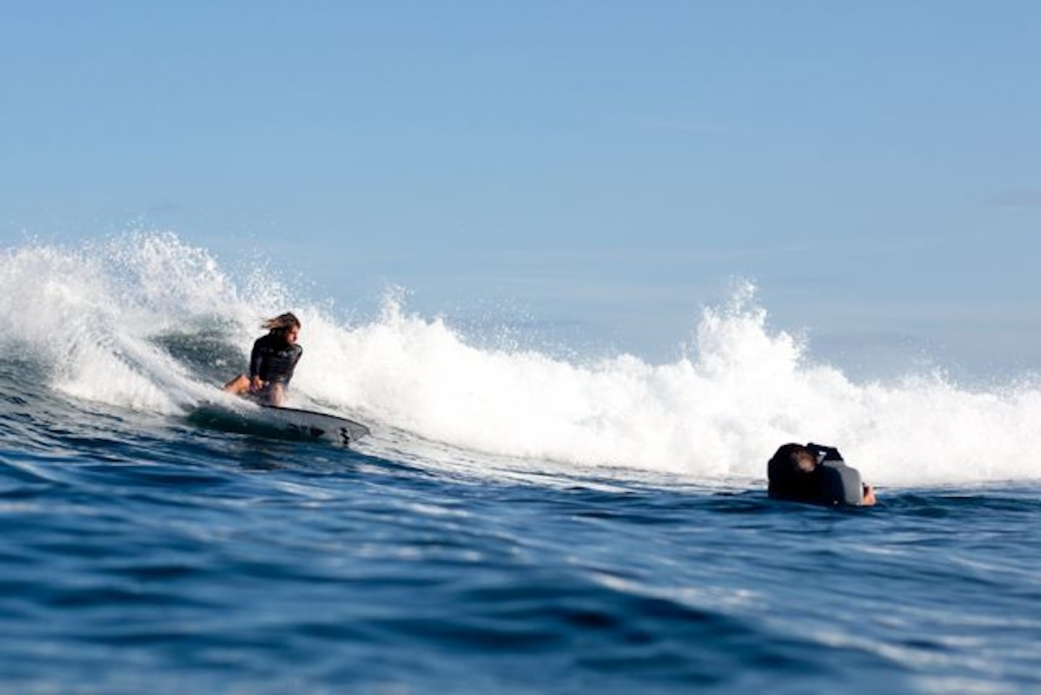 Dave Rastovich while turning back on the left after taking a right wave. Photo: Bella Vita 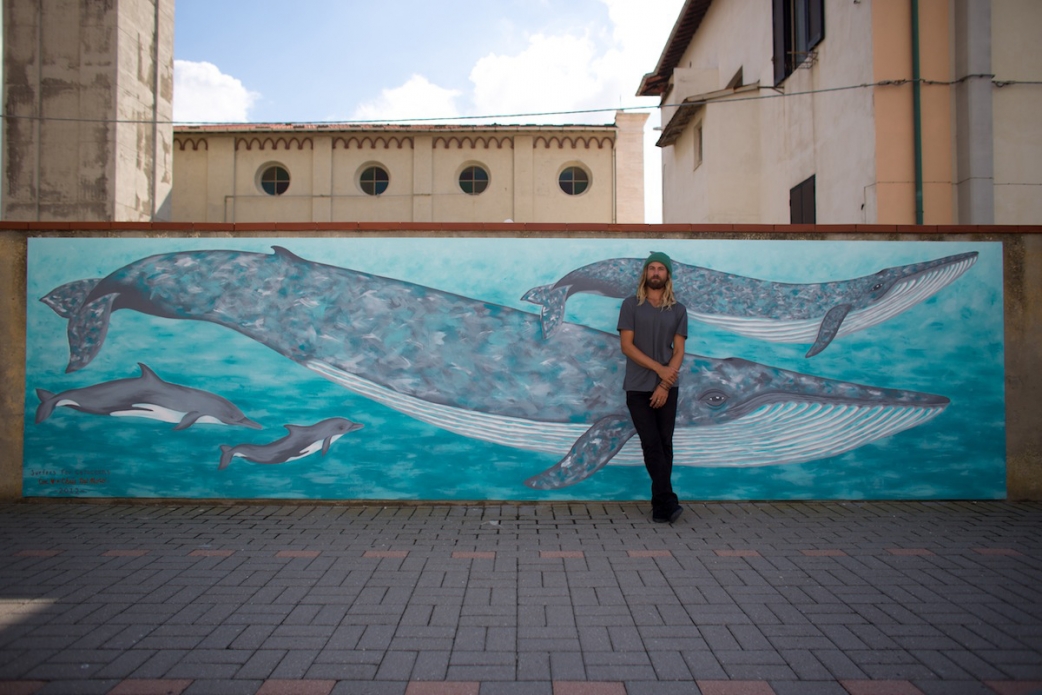 Bella Vita talks about Chris Del Moro and his ‘going back to the Italian roots’. The movie is about any expression of surfing culture. Art is a big part of it. Photo: Bella Vita 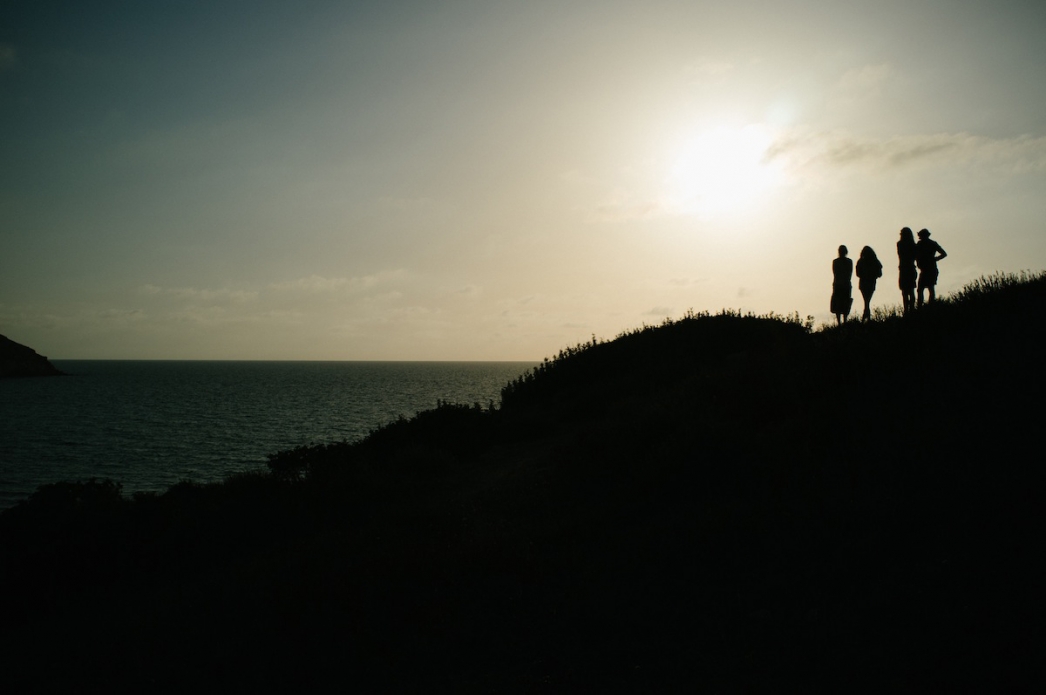 Waiting. The Mediterranean Sea is nothing like the ocean. Italian surfers learned how to wait a lot before surfing. You’ll need patience and heart. Photo: Bella Vita 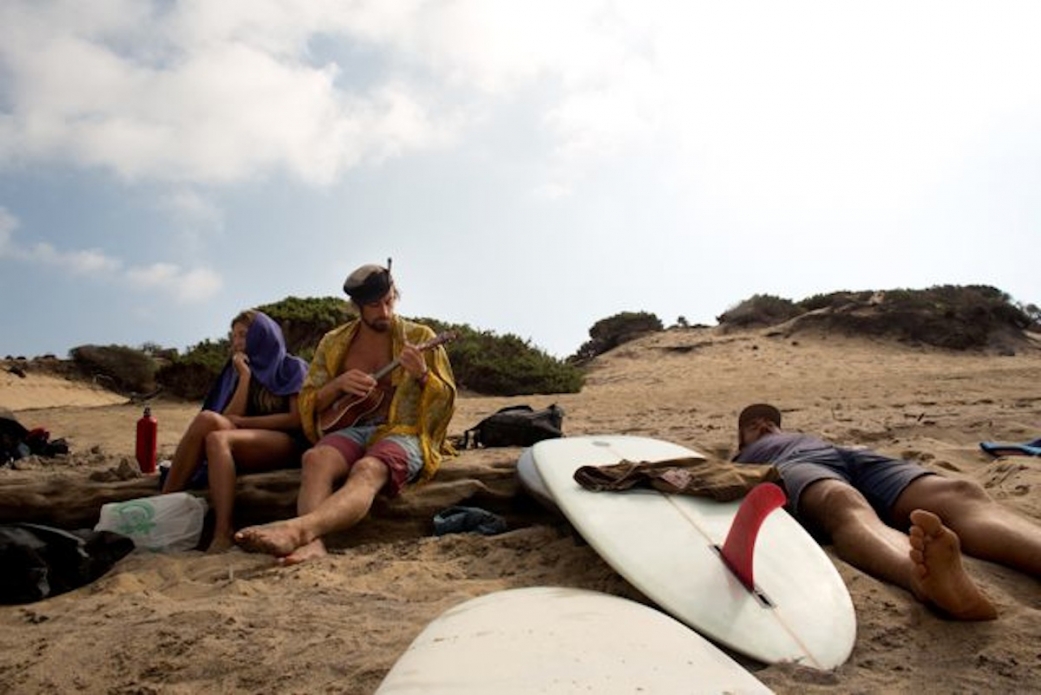 Chilling out on the beach with Dave and friends. Life can be pretty good sometimes. Photo: Bella Vita 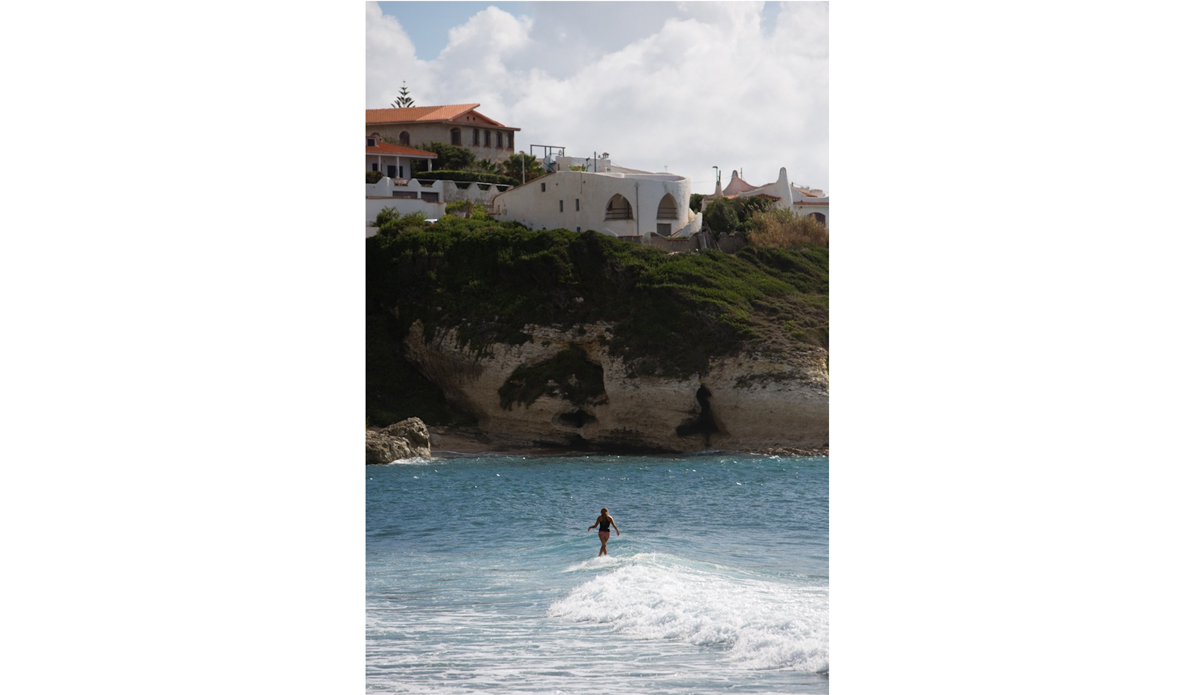 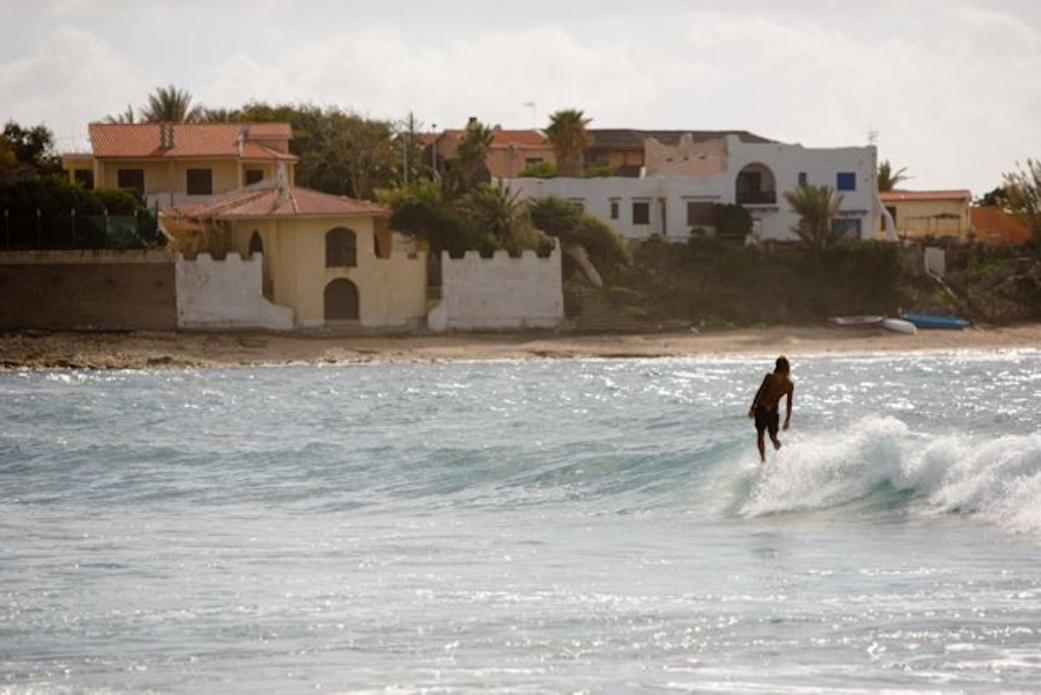 “This is really my first time I’ve been able to dive back into my culture and have this amazing time with my family. And introduce my friends to this place, and experience it with fresh eyes as an adult,” Chirs Del Moro says. Photo: Bella Vita 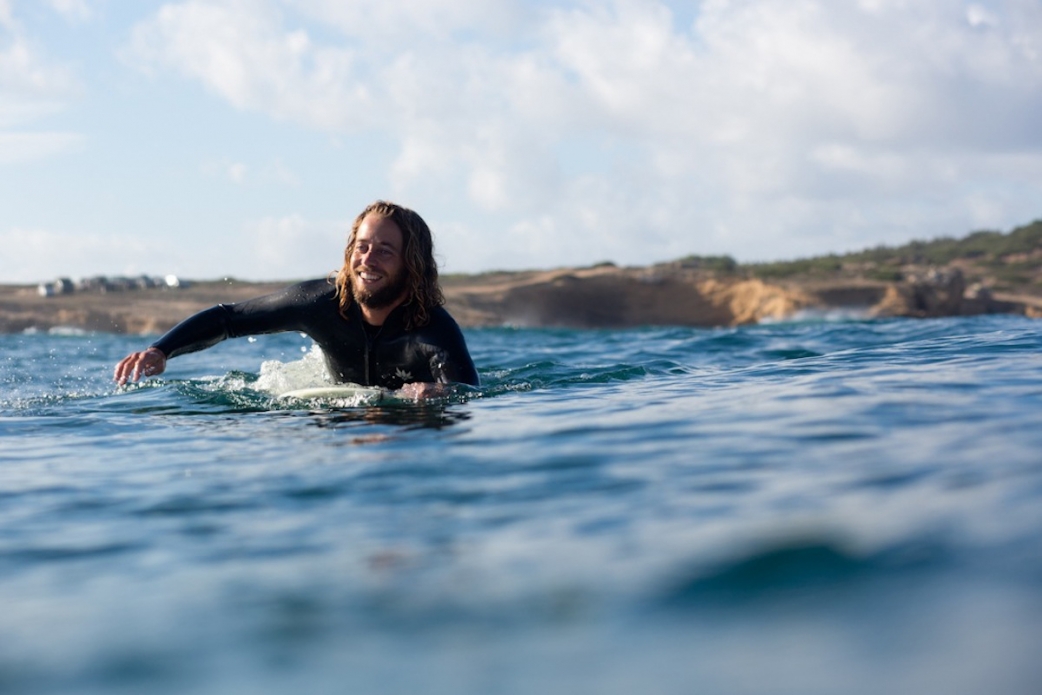 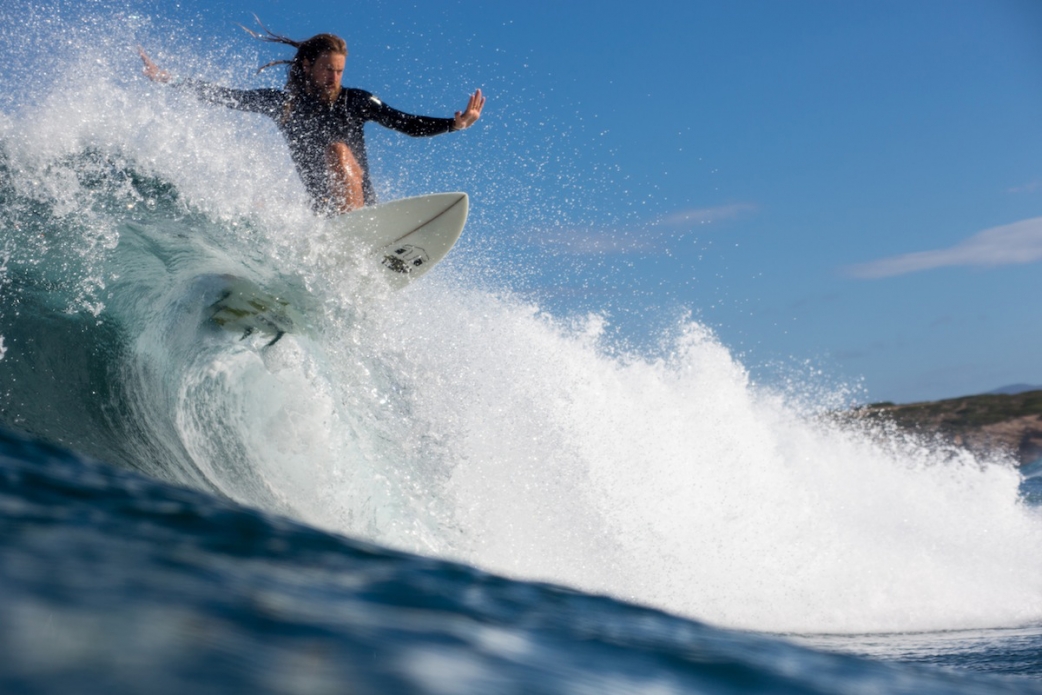 “A story of adventure in a land of beauty where family means everything.” This is Bella Vita. Photo: Bella Vita 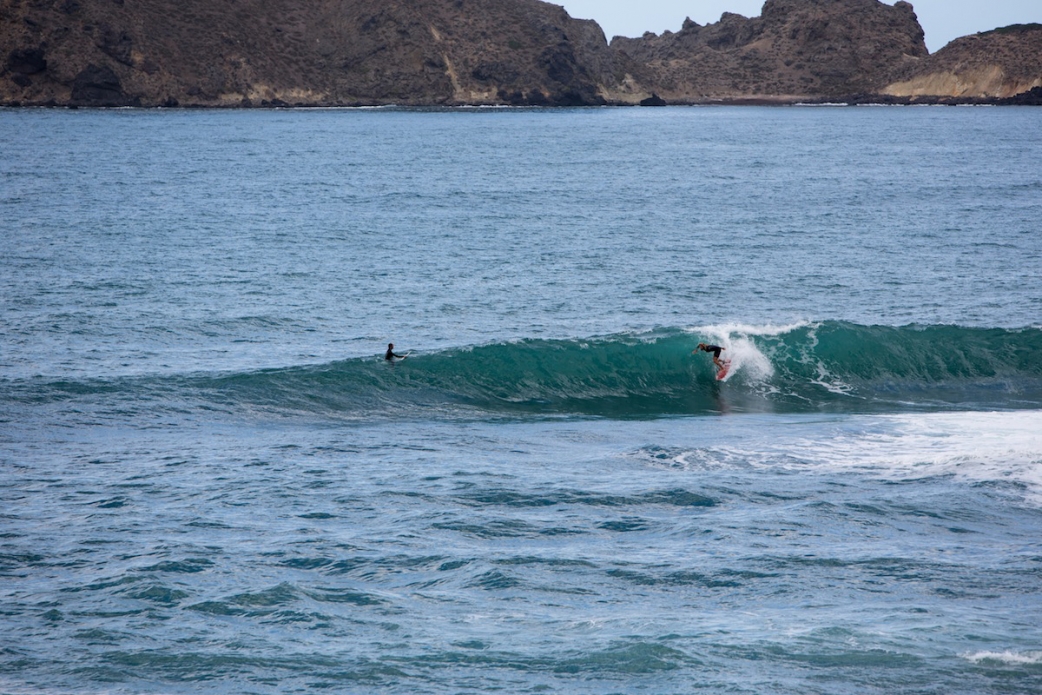 “The majority of Italians don’t even thing there are waves in Italy,” Chris Del Moro says. This movie will help the whole surfing culture to get familiar with all of this. Photo: Bella Vita

It was happening in late August 2013 and found myself lying on the grass as all the other dudes. That windy night of spring, I can say I was lucky enough to attend the Australian premiere of Bella Vita at the Byron Bay Surfing Festival in New South Wales. The movie was so inspiring; the atmosphere something I cannot forget. The thing was that Australian surfers — and everyone in the community, really — were standing there watching Italian surfers. I found it pretty rare, as an Italian-born. I felt kind of proud of my country.

The months ahead, I read much about the movie. I knew that film was so important for us because it was a starting point: it finally showed Italy to the surfing world. No more, “Oh really? So, there are waves in Italy?” in the air. Great. I needed to interview Jason Baffa, the filmmaker of Bella Vita. I needed to understand everything about it.

Hi Jason. First, why a movie about Italian surfing culture?

I was excited to do something new in the genre and I really wanted to focus on building story and emotion through cinema. When Chris [Del Moro] approached me with the idea, I knew finding waves in Italy — worthy of an action packed “surf-movie” — would be challenging and that the film would have to work on other levels to be successful. So it really inspired me to challenge myself and our team to try to create a new and unique movie experience for audiences who enjoy my other work. It also seemed like an idea that could potential reach audiences outside of our “core” surf-audience because Italy is such a beautiful and culturally rich place. That was an exciting idea for me.

But, mostly, the idea of three months in Italy with good food, friends, family, and wine. That just sounded like a fantastic project to be a part of.

I read the full story of Chris Del Moro and you in Bali, in the early stages, talking about the making of Bella Vita. What role did Bali have in the making of the movie?

Chris told me stories about growing up between California and Florence, Italy — a very special time for him. He shared how he had connected with a core-crew of Italian surfers and that the scene had blossomed into a new surfing sub-culture unique to anywhere in the world. He had always thought it might make an interesting film idea.

It was these early conversations over a few cold Bing-Tang beers that seeded the making-of Bella Vita.

How did coming back to Italy feel?

Returning to Italy after a long time was beautiful. I have done a lot of traveling in the last 15 years — to tropical places and I have really missed Europe. I love the history, the culture, the artwork. Moreover, I love great food, wine, and espresso, so Italy is hard to beat. Tuscany also reminds me a bit of California. The light, the colors, the rolling green hills. It all just felt “right.”

Yeah. I fortunately kind of know what are you talking about. We might get to the wine later. I’m quite curious: why film in 35mm?

The director of photography on Bella Vita is Scott Kassenoff. Scott shot water footage on singlefin: yellow and One California Day. We have known each other a very long time and when we decided to make Bella Vita, he was one of the first calls I made. There are so many format options right now to photograph a movie. On the other projects, we have used super 16mm film. There is a real beauty in the way film captures water, light and in particular, surfing. At the same time, I wanted Bella Vita to be an intimate documentary story that felt like a visual epic. I knew we needed a format that could handle lots of movement and post-card-worthy establishing shots of the fantastic scenery. So Scott challenged me with the idea of shooting the widescreen 35mm format.

35mm motion picture film is traditionally the format for big Hollywood movies. The film is larger, a magazine is heavier and the cameras are bigger and bulkier. This format works in Hollywood because you have a vast infrastructure of support on a big movie. Many hands make light work. What was tremendously difficult on Bella Vita was that we had very few hands. Myself, Scott Kassenoff, and our camera assistant Jonathon Taylor shot the entire movie. No grips, no camera department, no sound guy, no extra hands. Our team of three drove the car, made the lunches, loaded the four cameras, hiked the gear down sand dunes, through medieval hilltop towns and even out into the water. Our biggest resource was when Chris and the Italians could pitch in to help schlep gear.  It was an incredibly daunting task and at times overwhelming. But I am so proud of the back-breaking work we did because I think we accomplished what I had hoped. An intimate portrayal of life, told cinematically through the eyes of these traveling surfers.

I have been mixing my work with art & commerce: the art being projects like Bella Vita, and the commerce being my work as a commercial director for brands like BMW, Jeep, Patagonia, and Spy Sunglasses. I have taken about 18 months off work to make Bella Vita, so I need to sink my teeth back into the commercial world and pay some bills. But I love features, I love telling these stories and I’m anxious to find new adventures I can point our cameras at. Who knows, maybe someone reading this interview has a great idea that needs to be made — preferably with financing attached… ha!

Before saying goodbye, as any Italian dude usually does, do you care for a glass of wine?

You gotta try ours then. On a really exciting note, Chris and I are working with our friend, Piergiorgio Castellani — who is the surfer and winemaker we profile in Bella Vita — to import a series of wines. These wines will be under the label Zio Baffa (Uncle Baffa), which was my nickname in Italy. The first, “Filmmaker’s Edition” Toscana Rosso is made from the very grapes we harvested on Piergiorgio’s Tuscan estate while filming the movie.  Our vision is that audiences can watch the film’s wine harvest scene while drinking the actual wine. It’s better than 3D; it’s 4D!

Look for Zio Baffa this Spring.

No doubt. I definitely will. Thanks for the chat, Jason.

Cheers and thank you for the support.