Kelly Slater Has Very Strong Thoughts about the 2016 Presidential Election

Kelly Slater isn’t voting in the 2016 election. It’s not because he doesn’t care. Quite the contrary. In fact, he cares a lot. He cares enough to stray far from the safety of silence on polarizing social issues to architect a political art show with the help of Pat Tenore and a posse of artistic talent in Kevin Ancell, Bruce Reynolds, and Todd Glaser that fires hot and heavy on the theatrical performance that is the 2016 election cycle – AKA politics. Granted, the show is called Apolitical Process. Which is cheeky.

Slater told The Inertia that he’s not taking a political stance with the show. And he acknowledges that in doing so (and also in not voting in arguably the most important and dramatic political event in modern American history), he is participating. He’s just doing it, like he does with most things. On his own terms.

And cruising through the rustic Folding Table gallery off of Main Street in Venice – an urban beach community equal parts multi-million-dollar-home as Skid Row, the visuals are resounding.

A collection of machine guns that Bruce Reynolds assembled from found artifacts hangs beside a smashing collage that pits the busts of Mao Tse Dong vs. Donald Trump vs. Hitler above a wall that borders the Mexican flag. Not exactly subtle. Another piece parodies the dynasty of the Clinton family, with Monica Lewinsky perched above both Hillary and Bill. Again, not subtle.

Kelly points at the guns. “The only common item in each of the guns is a camera,” he says. It’s a nod to the tragic binge of American shootings that have been broadcast to the world via new media tools like Facebook live and how those visuals have stirred our nation.

Another wall features the surfboard art of Kevin Ancell, who teamed with Slater in 2015 to honor friends who had passed while raising awareness for orcas in captivity.

“We’re fucking the world up,” says Ancell. “It’s out of control. Something bad is going to happen, and that’s the only way it’s going to stop.”

The collection of art spares no politician. From Uncle Ben’s Wild Rice boxes featuring Ben Carson to a five-foot-long Bernie Sanders Freeride bus, the targets are vast. One of Reynolds’ gun pieces wears the title: “Happiness is a warm gun.”

“The main goal behind this was to increase the dialog,” says artist Bruce Reynolds, who has been friends with Slater since their early years in Florida. “Something like this forces you to think on your own and draw your own conclusions and emotions from it.”

“The ultimate message behind this is to bring topics up and discuss them” says Slater. “But they shouldn’t separate you. They should bring you together.” 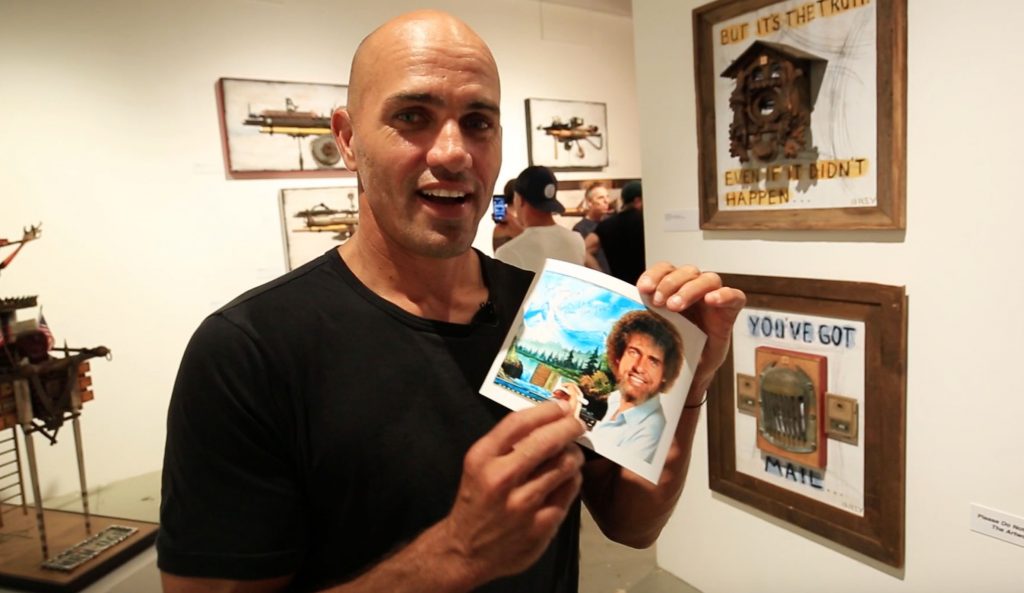 Kelly Slater and a posthumous Bob Ross. That might be the presidential ticket for 2020.