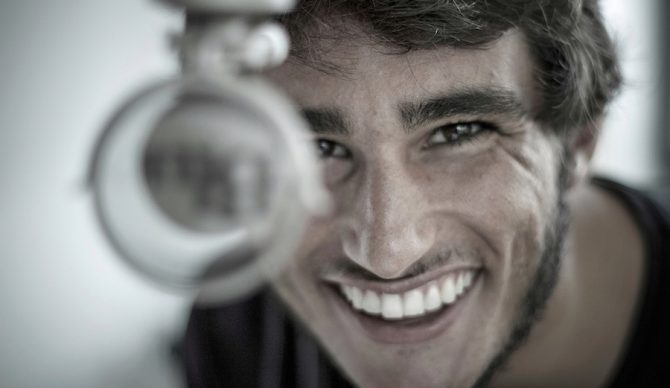 João Kopke is one of the most charismatic and authentic characters coming up in the most recent crop of Portuguese music and surfing talent. He has salt in his blood, notes and melodies too, and that is reflected in everything he does.

All stories begin with “Once upon a time…” João’s is no different. As an energetic 8 year old, he started surfing in Carcavelos, encouraged by his mother. At that time, surf schools in Portugal were still very small, humid and smelly places.

A year later, he joined the music conservatory where his sister was learning cello and his mother to this day remains a piano teacher, with just one condition: his instrument had to be the biggest! – and so began the double bass adventure.

Now he lives and transcends both, loving the ocean as much as he loves to share music with an audience, loving a perfect barrel as much as holding a note a little longer than what the sheet music demands.

Reflecting on the fact that, “surfing is proof that the human race is greater than it knows” , Kopke believes that artistic expression is how we show our most exceptional side, either the raw or most refined side of humanity.

“The music I hear defines the surfer and person I am.” – João Kopke | Photo: Hugo Silva/Undone Photos

This rad, soulful boy told me that he believes music touches a part of us that we cannot reach – and that part manifests itself  in everything we do.

One of the places where João spends the most time is the ocean, surfing between waves and tides. Double bass notes come through in his power and smoothness.

For him, surfing, as a form of personal expression, is the same as music, plastic arts, or poetry. It’s what’s beyond an equation. In essence, João wants to show that life in general is made up of stories. Surfing and music are just two vehicles through which to live these stories. More than a musician or a surfer, he is a genuine passionate storyteller.

I’ll let him tell you one, about his most recent episode of his series ‘Bored’:

“This time, we decided to shift the original Bored concept a little bit. Most of the time, during the episode something is going wrong until surfing saves the day. This time, though, it is not only surfing that saves the day – it is music, as well. We were recording a poem for another project, and the room didn’t make for a good studio, so we had to create one. We grabbed a couple of blankets and clothes of all sorts and built a hut that isolated sound. “